Here there be LARPing 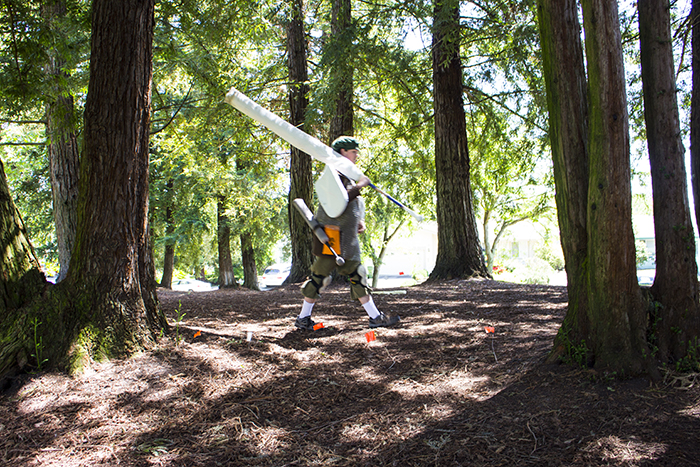 Warrior winning after the match.

If “Dungeons and Dragons” is too slow and predictable, maybe you would like to get out of the basement for a bit and see what this sunlight and socializing thing is all about.

Enter LARP, which stands for live action role play. It comes in two flavors: the social LARPs and the “sword and board” LARPs. Social LARPing involves a group of people together in a room to play Game of Thrones-style political games like World of Darkness and League of the Five Rings, a Japanese fantasy militia game.

But for me, the “sword and board” LARPing sounded much more exciting. I traveled to the Crimson Woods at Eagle Park in Rohnert Park to watch as ten dedicated LARPers battled in a medieval kingdom called Amtgard—magic, monsters and all.

Trog the troglodyte was my guide to this fantasy world. Trog is a half-lizard-half-man in game and a Santa Rosa Junior College I.T. student out of game. We sparred a bit as he explained the basic rules: a body hit is instant death, two hits to any limb makes it useless and two lost limbs means you’re dead. It’s quite a workout, with all the running, swinging swords, and trying (and failing!) to dodge arrows. Turns out longbows are complete death machines if you don’t bring your own shield.

LARPing is a fascinating part of nerd culture that not many people know or understand. If you’re into fantasy, it’s worth checking out. The Amtgard LARPs meet Saturdays at 11 at Eagle Park in Rohnert Park.