Creating a legacy of his own 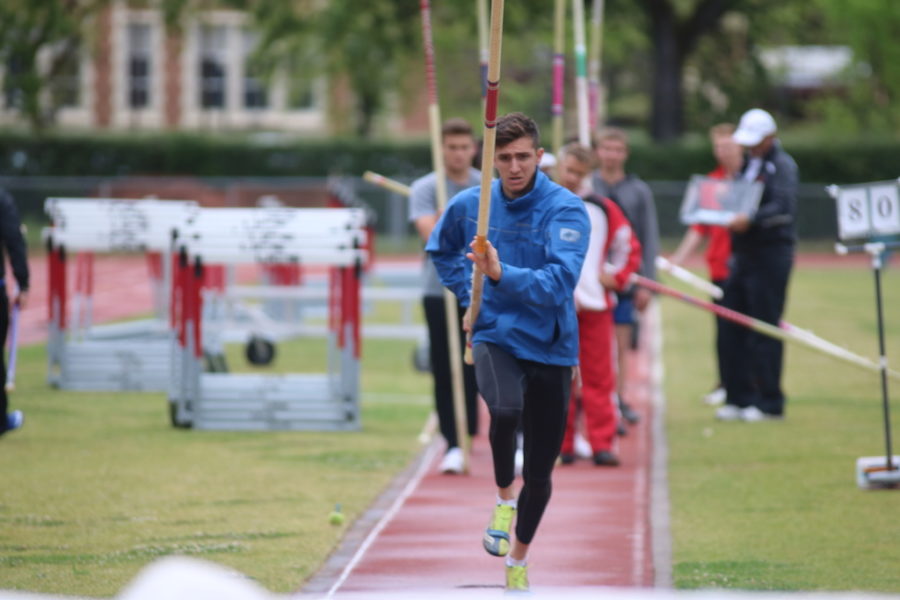 The best 3-point shooter. The best quarterback. The best defender. The fastest sprinter.

No matter the sport, most athletes want to be remembered for their raw ability. A great athlete isn’t measured by their natural ability, it’s the relentless persistence for peak performance, mental toughness and the selfless dedication to his teammates that separate’s a good athlete from a great one.

Such is the case for student-athlete Adam Gockel, who had anything but a normal start to his record-breaking track career.

In just the second year of his track and field career, Gockel has worked his way to become ranked No. 1 in the state for the decathlon in the California Community College Athletic Association. Gockel never planned to have a college career as a decathlete—or any college sport for that matter.

Homeschooled through high school, Gockel didn’t have the opportunity to play many school sports. He was able to join the baseball team at Rincon Valley Christian School as a pitcher and was a member of the Nordquist Junior Dance Club in 2014-15.

After earning his high school diploma in 2015, Gockel decided to attend Santa Rosa Junior College to focus on academics and transfer as a business administration major. But that plan didn’t quite work out how Gockel envisioned.

In the start of the 2015-16 track season, an SRJC cross country athlete and friend introduced Gockel to head track and field coach David Wellman.

Since then, Gockel hasn’t looked back. In his first year as a decathlete, Gockel finished sixth in the state championship with a score of 5,914 which is close to his goal of a D1-level score of 7,000.

This season, Gockel has put in a lot of hard work as he tries to win the state title at American River College May 19-20. He recently beat SRJC’s decathlon record of 6,572, set by teammate Kasey Mancini during the 2015-16 state championship. Gockel smashed that score by a final of 6,655 during the NorCal Multi Championship at SRJC April 12 even while he was sick during the two-day competition.

His top two choices for schools are Cal Poly SLO and UC Berkeley, although he has not yet reached out to the latter.

With school acceptance letters and scouting calls piling up, it is clear that Gockel’s academic effort and athletic performance are paying off ten-fold. But this success hasn’t come without sacrifice.

Outside of track and field, school and his online business Gockel rarely has time for anything else, but every once in a while he gets inspired to create art.

“Its not really my escape, but it’s something I love doing,” Gockel said. “Every once in a while I will get really passionate about some idea I have in my head about art and [I’ll] just run with it.”

Although art is a past time, it is not his escape from the stresses of life. Fittingly, that is track and field.

“I love doing it. When I’m doing pole vault, javelin or discus on my own, it’s like I can get in my own head and just do it,” Gockel said.

Out of 10 events Gockel competes in, pole vault is by far his favorite event and what really got him to fall in love with track and field. He describes the feeling with pure bliss as he goes through the steps in his head every time he approaches the vault.

Gockel explains how every time he does pole vault he thinks about every step in his mind as it happens, ensuring technical precision in his steps and form in order to get the maximum height out of his volt.

“After that, I’m just flying and I get to enjoy it,” Gockel said.

When it comes to his other events, Gockel adds that his favorite throwing event is a tie between javelin and discus. He also added that the event he needs to improve on the most, high jump, is also the hardest one for him to practice.

The reason for Gockel’s difficulty with practicing high jump stems from a problem most track athletes deal with—shin splints.  The hard platform used for high-jump makes it especially difficult for Gockel to continuously practice the event. He adds that shin splints are something he constantly deals with throughout the season.

Aside from the shin splints, Gockel tries to stay fit and healthy before and after every meet. To prepare for a decathlon, Adam tries to get a solid night of sleep as well as load up on carbs. One of his go-to carb-heavy meals the night before a meet is pasta and bread.

Apart from the physical aspect of preparation, Gockel gives a lot of credit for his success to his mental preparation as well.

“I do a lot of visualization, especially right before a decathlon, but honestly through the entire season too. When I’m in the shower I will run through every event in my mind and see myself doing it to the best I possibly can at that time, and I do that a lot,” Gockel said.

Since decathlons are two-day competitions, Gockel likes to ice his body at the end of the first day but after that tends to stay off the ice, which is unusual for an athlete who demands so much from his body.

Nonetheless, at the end of an event, Gockel recovers by once again eating a ton of carbs and getting solid rest to ensure he refuels his body properly.  But while most athletes try to take a couple days off after an exhausting event like the decathlon, Gockel is a strong believer in staying active during the recovery phase.

“Although you’re super exhausted and usually have injuries afterward and just want to take three days to rest, and not do any workouts, but when I do that it takes me a lot longer to recover,” Gockel said. “So if I just do a little warm up and a little workout each day I find it actually helps me recover faster.”

An average training day includes arriving around 1 p.m. to warm up with a couple laps around the track and some stretching. After that Gockel usually starts with a throwing event and then get to a more technical event such as pole vault. He will switch to a running event such as hurdles or a 400 and then Gockel finishes off with another throwing event. In the weight room, Gockel has been really trying to focus on getting his legs stronger.

Staying fit and healthy is no joke for the young and ambitious decathlete. As he trains to get that Division I level score, Gockel is critical on himself in all aspects of his training.

A great example of this happened during the NorCal Multi Championship when Gockel broke his personal record in the long jump. He broke his record by 1.5 feet and although it felt great for him to reach that new P.R. Gockel was still critical of his performance, figuring out ways to improve on his next jump.

“My landing is still complete trash, if I can get my landing better, I know I can get 23 feet. I’m still stoked about it but it shows me how much more room I have to improve. If I did that and I’m still not at peak performance that just means I need to work harder and I could get a lot better,” Gockel said.

This is the athlete mentality that Gockel has learned to conquer in order to reach new heights. Although some trainers would say that being that hard on yourself isn’t good for your mental performance as an athlete, in Gockel’s case, it’s what keeps him focused on achieving the next level while staying humble along the journey.

“A lot of people compare me to everyone else and when they see that I’m first in state they’re like ‘oh wow, you must be so good’, but I constantly only compare myself to myself and I know I could be so much better than where I am at right now, so I don’t see it so much as amazing as other people do,” Gockel said.

As Gockel comes near his goal of breaking 7,000 points through hard work and a positive mind set he continues to carve a legacy the way he sees it. If it was up to the man himself—Gockel would much rather be remembered as a team leader and motivator rather than the amazing athlete who smashed the SRJC decathlon record.

So what does the rising star want to be remembered for, if not his amazing athletic performance? It’s simple.

So there you have it. It’s not always about the glamor and glory that comes along with being the best which keeps an athlete motivated. Sometimes it’s a humble beginning and a few right turns that makes an athlete fall in love with what he does.