On the offensive: SRJC debate team refutes the competition en route to nationals 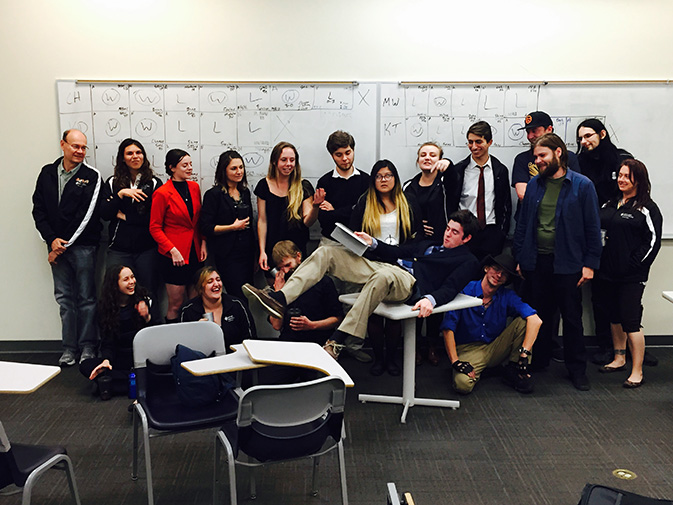 The Santa Rosa Junior College forensics team poses for a group picture before heading off to Washington D.C. They are currently ranked 2nd in the nation.

The debate team does not perform highlight dunks on a hardwood floor. They do not smack home runs in front of fans blinded by the screaming sun. Nor do they watch blood bounce on the ice in a rink after a strong crash against the glass wall. But the Santa Rosa Junior College forensics team has mastered its craft and are the country’s best debate ‘athletes’ thanks to a strong work ethic and a great coaching staff pacing the border of the stage.

Hal Sanford is one of the coaches pacing the border. After becoming head coach in 2012, Sanford has guided the team to success season after season, never falling below No. 6 in national rankings. Currently standing as the second best debate unit in the nation, their continued dominance breaks boundaries for the humble community college program. It all comes down to great coaching and a team-first mentality.

“We almost have a network it seems,” Sanford said. “We have really good coaches and alumni that makes a circle-of-life type, ‘Lion King’ thing for future generations.” Sanford’s hands-on approach can be seen both on the debate team and in the classroom in his amateur speech classes.

In contrast to the raucous crowds and trash talk of athletic competitions, college debates take a different tone. “Everyone wishes you the best and it isn’t a hostile environment like one might think at a competition,” said first-year debate athlete Chelsea McCarty. “People from the other schools were very supportive and comforting to perform in front of.”

Mental grit and perseverance is important in debate. Team members conduct painstaking research into current events in addition to their focused study of debate theory and time management. It’s similar to the way athletes find studying game tape is important for their success.

But not all aspects of debate and athletics are the same. Debaters have little advance information about the topic and scope of their events. “If you go into a track and field competition you know you’re going to have hurdles, you know you’re going to have long distance and javelin and all that, so the athletes can focus on those events,” Sanford said. “But when we go to the state tournament we only know that there are three types of debate…and we know the resolutions and [we know] the topics are usually contemporary but there is so much room there.”

SRJC’s debate dynasty is impressive, and a testament to the team’s dedication, skill and talent. The forensic students have fine-tuned their skills to become some of the best in their field in the United States.

“We have high expectations and we will deliver in nationals,” said speech athlete Lilli Anderson. “It’s definitely a challenge, but you learn a lot and it’s a lot of fun. Despite being [ranked] second, we know we can come away with first.”

The SRJC debate team departs April 10 for the National Intercollegiate Speech and Debate Tournament in Washington D.C. to prove their worth as the best debate team in the U.S.