Ready for take off 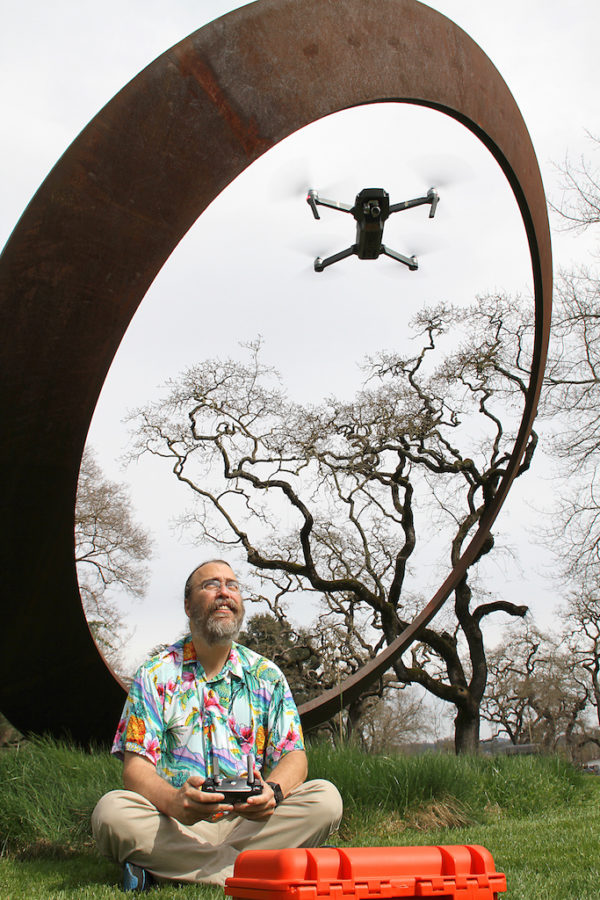 Laird says offering a course on drones is in line with the department’s mission to keep up with the latest and greatest cutting-edge technology and to bring students together with that technology “as fast as the bureaucracy will allow it.”

In January 2016, Laird traveled to the Consumer Electronics Show in Las Vegas and took note of the popularity of drone culture.

“I personally owned a few small drones, maybe four inches across, just for toys. Then as soon as I started observing them being used for practical purposes, I thought, ‘That’s something we need to get in on,’” Laird said.

A new era in aviation

U.S. Transportation Secretary Anthony Foxx stated last year, “We are part of a new era in aviation, and the potential for unmanned aircraft will make it safer and easier to do certain jobs, gather information, and deploy disaster relief.”

The Federal Aviation Administration legalized drone flying in August 2016 and moved swiftly to regulate the use of drones weighing less than 55 pounds in a series of guidelines known as Part 107. The FAA also laid out plans for a process to certify commercial drone pilots with a licensing exam offered through a series of federally approved testing centers (there’s one at the Charles M. Schultz-Sonoma County Airport). Under certain guidelines, a hobbyist is free to fly a drone without this license, but pilots who have undergone federal certification can operate drones for hire and train other pilots.

Laird passed the new exam to become a federally certified drone pilot in January 2017, which cleared the way for him to teach the new course at SRJC. He says he believes he’s the only certified pilot at SRJC, at least for now.

The FAA cites encouraging job numbers for drone pilots, estimating that the drone industry could generate more than $82 billion for the U.S. economy and create more than 100,000 jobs over the next decade.

Laird applied for a number of grants to fund the SRJC’s new drone program. As of this month, the department owns three drones, and Laird hopes to purchase as many as 10 additional drones by the time the course is offered next fall. Some of the funds came from California’s Strong Workforce program, which aims to lift low-wage workers into living-wage jobs. As part of the Strong Workforce grant, SRJC will take a lead role in drone pilot training, working in conjunction with six other community colleges. Instructors from the six colleges are planning a curriculum institute this summer.

Laird purchased the college’s first drone, a Mavic Pro, from DJI, it’s one of the leading companies in consumer drone technology and best known for their white, stubby-legged Phantom drone series. SRJC is one of the first colleges in California to own a Mavic Pro. It’s light years ahead of the mass-produced toy models available to the general public, which can be fun to fly but can crash in the slightest breeze. “I parked too many of those in the trees,” Laird says with a wry smile.

The compact Mavic Pro comes with a high-resolution camera for both still and video image capture. It can also be equipped with an infrared camera to capture heat signatures, which gives the drone the ability to aid in search and rescue operations, agricultural land surveys, and much more.

Laird’s first flight with the new, professional drone was almost too easy, he says. The stability and control were much improved, and soon he was doing more than he ever thought he could do, such as flying over open ocean at Goat Rock State Beach. “Granted the drone was only flying 50 feet from shore, but on the Pacific Coast 50 feet might as well have been 50 miles. It was terrifying, but I felt confident with the thing,” Laird said.

Laird believes that applications of the technology are mostly limited by our imagination. “I was just reading about a school today that is using drones for bird counts,” he says. “They suspend a microphone off a long fishing line beneath a drone to capture bird calls.” By using a drone, the birds spook less and researchers can capture more accurate information.

The goal of SRJC’s course is to prepare students for the FAA commercial pilot’s exam and give students a strong foundation for becoming professional operators.

The course is currently making its way through SRJC’s curriculum development process, and final approval is expected soon. The course will have at least three parts. Part one is drone safety, not just how to fly them but how to fly them safely. Part two will explore the utility of drones, their commercial and industrial uses, and career opportunities. Part three is preparation for the certification exam

Students who pass the certification exam could work as a photographer, filmmaker, building inspector, or agricultural or ecological surveyor. There are also many opportunities for drone pilots in public safety and construction. Laird hopes to bring in guest speakers from the professional sector to share their expertise.

As the drone program develops, Laid sees his course as the starting point for training with drones on campus. He believes other departments, such as public safety, could offer industry-specific courses to build on this foundation.

Looking to the future

Drone racing is becoming a popular sport, especially internationally where regulations are a bit looser. Pilots can fly custom-built drones at speeds well over 100 mph in stadiums where racers fly laps and navigate through a series of hoops. Pilots wear goggles that give a real-time view from the drone’s perspective as it speeds along the flight paths of the race.  Last year, at the World Drone Prix in Dubai, a 15-year-old British pilot took first place and a prize of $250,000.

Where is the tech going? “Everywhere,” Laird says. Some of the newest advances allow for communication between drones. Imagine a squadron of drones flying autonomously in unison like a school of fish.

“Flying one drone is easy but flying 10 or 20 gets a little bit scary because you have to start to think in that 3rd dimension and that’s tricky to do,” Laird explained.

Like many of the emerging technologies that are disrupting the status quo, drone usage has its fair share of practical and ethical questions. Laird balances his enthusiasm for the technology with a healthy concern for issues of privacy and safety. He believes these issues are best addressed with education.

“My main concern is people flying who don’t know what they are doing. I jokingly call them, spinning-propeller-blades-of-death. I don’t really mean that, but they can be dangerous,” he said.

“That one stupid drone pilot is going to be the one who gets the press,” Laird lamented. “And so the fewer of those we can have the better.”

Operator error is a barrier to safety, Laird believes, and a main reason he wants to offer the course at SRJC. During last fall’s intense wildfire season, fire officials reported overzealous drone operators trying to capture dramatic shots interfering with the work of firefighters.

Time will tell whether the benefits of the technology, including the growth in jobs, will outweigh some of the concerns about safety and privacy. As Laird sees it, “People will be stupid with whatever the current technology is, but I just hope I can teach some of them to be a little less so.”