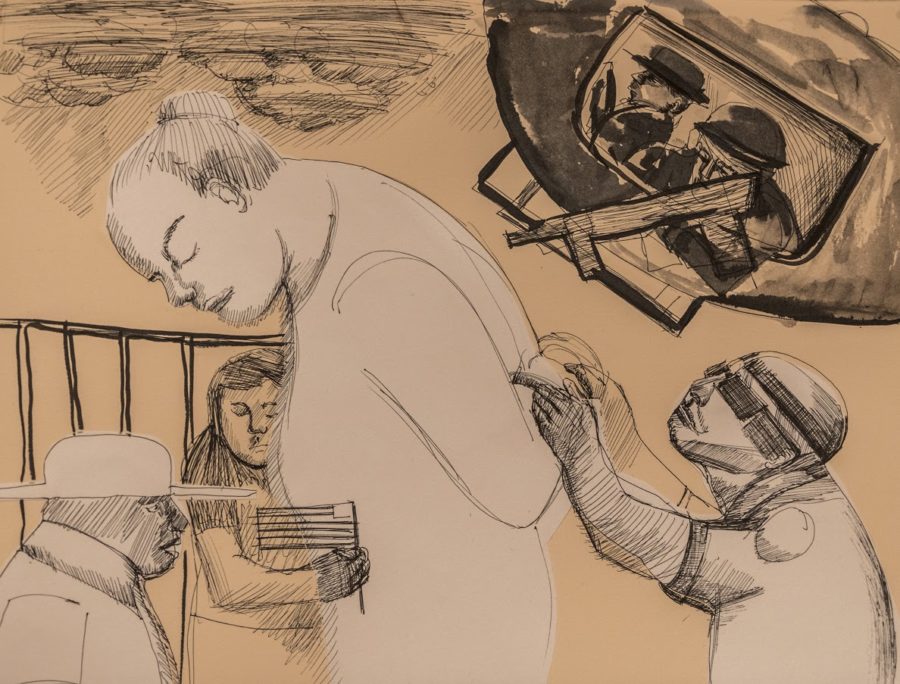 Take a second glance by The Oak Leaf News on Exposure

The year is starting off in a way that’s keeping the people of America on their toes. In our current divisive political climate, Maria de Los Angeles, a Santa Rosa Junior College alumna now living in New York, is using art to voice her opinion at the Women’s March and other protests. Her work depicts the challenges immigrants overcome to make this country diverse and beautiful.

De Los Angeles says her first discovery of the power of art to effect change happened on a trip to the giant colossal stone heads of the Olmec in Tabasco, Mexico.

“It was the first time I saw sculpture,” de Los Angeles said. “They were so large and I was a little kid. I still remember standing there, looking at them. I don’t know what it was, it was fantastic.”

Originally from Michoacán, Mexico, de Los Angeles immigrated to California with her family when she was 11 years old. She still remembers how she and her siblings were drugged on Tylenol to keep them quiet so they would not get caught at the border.

“I was so upset,” de Los Angeles said. “I was carsick. I still get carsick. I was sick the whole time.”

After moving to Santa Rosa with her family and completing middle and high school, de Los Angeles had no plans until a friend recommended SRJC. de Los Angeles thrived at SRJC, taking lots of classes and forming bonds with faculty such as astronomy instructor Keith Waxman. She made her home in the art department, exploring everything from figurative drawing to monoprinting to etching.

“School was my way of surviving my immigrant experience, and art was my way to survive school,” she said.

De Los Angeles spent four years and completed an associate’s degree but hadn’t settled on how to further her career until art faculty member Alan Azhdarian handed her applications for art schools around the United States.

“Alan Azhdarian is, and will ever be, maybe not necessarily my teacher anymore, but somebody who made a great impact to me, as an artist and as a person,” de Los Angeles said. “I think he made me into an artist.”

She was accepted as a transfer student at several top art schools, and enrolled at New York’s prestigious Pratt Institute, where she earned her B.A. She then went to Yale University for a master’s degree and now works as a visiting instructor at Pratt while building her art career.

De Los Angeles credits Deferred Action for Childhood Arrivals (DACA) for being able to continue her education. Because of DACA, de Los Angeles was able to travel to Italy last summer to study.

“DACA, it’s what Obama gave us,” de Los Angeles said. “It gives us a work permit and permission to travel abroad if we get an invitation. [Traveling abroad] is called advance parole, which is hilarious to me.”

Under President Donald Trump’s administration, some DACA applicants were told not to apply for a two-year renewal. De Los Angeles planned to travel to see family in Mexico this year, but with the recent immigration changes, she put those plans on hold. She says living through these events creates a culture of oppression, marginalization and ridicule in our community, something she feels will be felt for generations. De Los Angeles compares this upheaval to the feelings felt by survivors of the Holocaust or the 1920s stock market crash.

“I love this country and I want to love it,” de Los Angeles said. “I think it should love me. I have done everything. I have behaved.”

In her work, de Los Angeles often references John Steinbeck’s “Grapes of Wrath,” in which immigrants are considered a second class labor group. She says in this country it’s never been her choice to be free. However, this is not a reason for de Los Angeles to stop her advocacy.

In 2014, de Los Angeles founded a Santa Rosa arts nonprofit called One City Arts, which works with young students who have been traumatized by incidents like the Andy Lopez shooting and who have dealt with a lack of equity in education around Sonoma County. She received support from the Voices Youth Center and the Sonoma County Board of Supervisors. While she no longer leads the program, she has helped it find a permanent home at the Luther Burbank Center for the Arts.

De Los Angeles hopes One City Arts will give local students a place to imagine their future.

Locally, de Los Angeles also created a mural at the Rohnert Park Health Center and has plans for another mural in collaboration with students at Lawrence Cook Middle School, where she once attended.

“I’m building a career here in New York,” de Los Angeles said. “But I come home [to Santa Rosa] because I care. I have family there and I am going to come back there. I never want my home to not be as good as it can be. I don’t want to come back to the same thing.”

While her work has always been political in nature, de Los Angeles has increased her activism since the November presidential election. On Dec. 22, 2016, de Los Angeles cultivated a Santa Rosa protest called the ‘Suitcase Performance.’ Participants carried travel attire, held signs and wore red tape to inform residents about safe sanctuaries for immigrants.

In New York, she participated in the Women’s March and created a recurring display of paper dresses at Trump Tower. The paper dresses project originated from a self-portrait and her exploration of the meanings of her own life.

“[The dresses are] not just a pretty pattern and the roses that my mom made,” de Los Angeles said. “It’s also this immigration thing, me being illegal.” While the paper dresses are art, de Los

Angeles recently announced that the project has inspired her to start her own fashion line, with everything from everyday wear to customized identity gowns and quinceñera dresses.

Whether it’s with works on paper or performances and happenings, de Los Angeles believes art is a way to show changes in circumstances that language alone cannot convey. What she portrays in art pertains to what she deeply cares about: economic inequalities and immigration reform. These thoughts started her on a path to “artivism,” a term which emphasizes the connection between art and political activism.

By visually changing the way art is seen, whether it’s on a canvas or on a dress that someone wears on the street, de Los Angeles wants viewers to take a second glance at issues many consciously ignore.

“I think it is our responsibility when we love something to make it better,” de Los Angeles said. “Just like I am trying every single day to be a better person.”