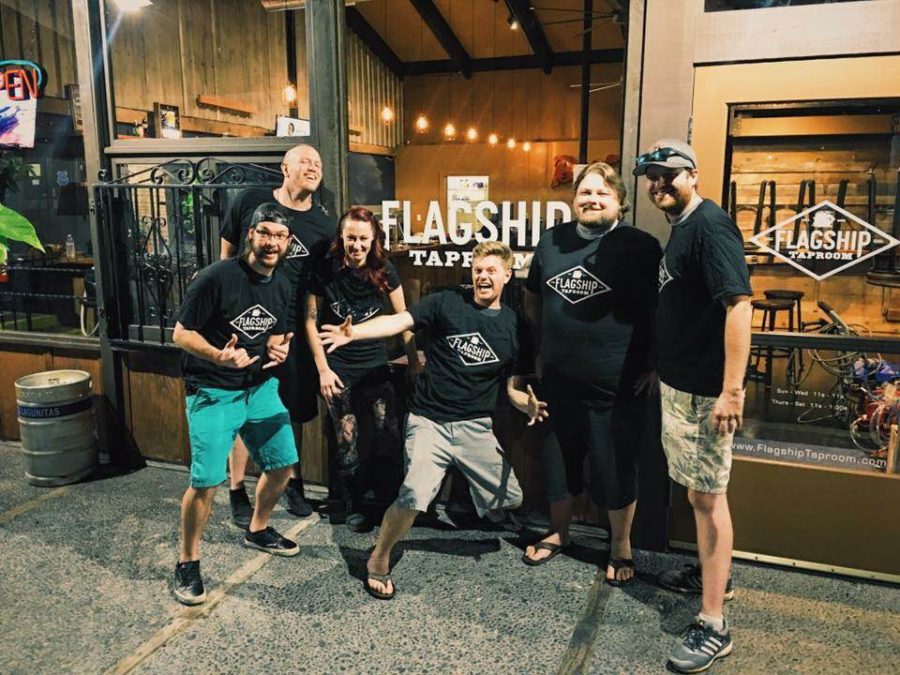 The Flagship staff, ready to set sail, poses for a photo in front of their restaurant.

Starting a business is no small feat, and it’s tough to break into business regardless of your education. Some of the world’s most successful business owners never went to college, including Bill Gates, Mark Zuckerberg and Steve Jobs. Each had a dream and decided to pursue it.

College isn’t an avenue for everyone. It can be a transformative experience and most people have a calling to be there for one reason or another.

Ivey took his time in identifying that school wasn’t the right fit for his path. “I learned I wasn’t adept at a sit down learning environment,” he said. “Last year I tried to go back for the third time, and on the second day of class, it was just not me.”

Two of the owners have been in school for some time, but studied subjects that don’t necessarily relate to their current restaurant career.

“I was studying music education before,” said Inlow. “After a while, I thought I really liked that more as a hobby and not a career. I was also on the road to franchise something with Dutch Bros. Coffee, and realized the more I got into that, the more I wanted my own thing.”

Montgomery has attended both SRJC and Sonoma State, switching his major seven times in a single semester. He downsized his belongings to fit in two duffle bags and was planning to leave California before being approached by his longtime friends about the taproom venture.

The five owners have been long time friends, and two of the group even attended kindergarten together. All wanted a place where they could be their own boss and serve the community they’d grown up in, one beer at a time. Given their shared Sonoma roots, they felt opening a business together was their best option for success.

While all three men have left college for now, they say their education held some advantage in launching their business.
“Going to college built stamina. Now I have taught myself how to work really long hours and continue to push through and do it all while not getting paid,” said Inlow. “I think some of the most successful people are those who work for themselves. They are able to make money work for them, rather than work for money.”

Ivey said he realized he didn’t need to compare his happiness to someone with a four-year degree. “Use [college] to find that goal you have in mind, and know that it doesn’t take one path for you to get there.”

After months of development, plans for their business rapidly fell into place in early November with their liquor license finally arriving, proving that all they had worked for was becoming a reality.

Only time will tell if their gambles will pay off—but what’s life without a little chance? In the end, only you can decide what’s worth it for your goal or dream. It takes a leap of faith to start running with the big dogs.

Flagship Taproom is shooting for a more casual, family-friendly atmosphere than other downtown Cotati bars. It boasts a great downtown location next to popular La Plaza Park. Their plans are to serve some small bites alongside local beers, with twists on such classics as grilled cheese. Flagship will be the only taproom to serve every offering from Lagunitas Brewery on tap, aside from the well-known brewery itself.

Flagship Taproom is at 8099 La Plaza in Cotati. It’s currently in the midst of a soft opening and will have a grand opening in early December.