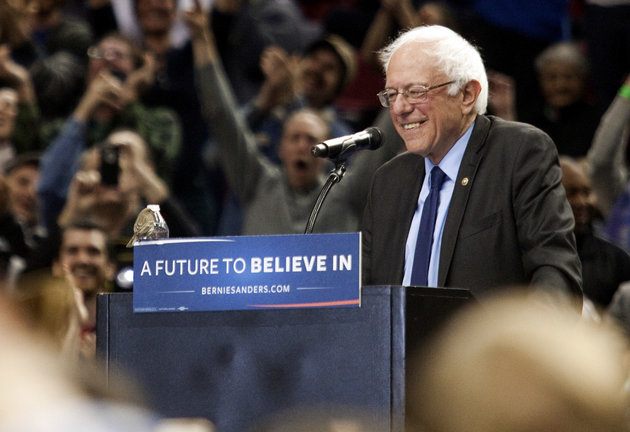 “My boss had accused me of being a communist after he noticed the Bernie sticker on my car,” Malouf said.

When he met with Stephen Tynan, a member of the North Bay for Bernie Office in Petaluma, Malouf asked whether there were SRJC campus groups he could coordinate with. It turned out there wasn’t a Sanders movement on campus.

“That was when I knew I had to take the initiative and help organize a grassroots, progressive coalition on campus to get Sanders elected and register voters,” he said.

Throughout the 2016 election, students around the country have pledged support to Democratic candidate Sanders. Malouf is one of many young people who have become enthralled in Sanders’ campaign.

The club spreads its message of Sanders by tabling three times a week on campus near the crosswalk to get students to register. Members hold regular meetings Tuesdays and Thursdays from 12:30-2:30 p.m. near Bertolini Student Center to encourage students to spread Sanders’ message.

“I think we have a broad reach, even though we’re just a few people who are consistently at the club meetings,” said Jackie Barr, 21, co-organizer and treasurer of the SRJC Students for Bernie club.

Barr reflected on the first time she heard of Sanders. “People were sharing about him on Facebook and saying how they were excited for him,” she said. She began to look into what he stood for and started listening to his speeches.

Johnson appreciates how consistent Sanders was throughout his political career.

“He helped organize Civil Rights protests in Chicago during the 1960s,” she said. “If you look at his record, you can see just how consistent he has been throughout the course of his political career, compared to Hillary Clinton.”

“He’s been able to shift that frame over to the left and show that, yes, a socialist can be elected,” Malouf said.

Although many in the past have preached that socialism isn’t the answer, Malouf thinks differently.

Although many news networks have reported Sanders has no chance of winning and Clinton would be the Democratic nominee, Sanders supporters don’t support her.

“I think the Democratic party is only hurting themselves by letting Hillary [Clinton] represent them,” Johnson said.

Johnson blames Clinton’s inconsistencies throughout her political career, in which she flip-flopped on a number of issues.

“She represents a lot of what is wrong with the Democratic party,” Malouf said.

For Sander supporters, he represents a better future for college students who struggle to pay tuition while working minimum wage.

“We’re the generation of millennials that saw the economy crash and burn. Our parents blamed it on us, claiming we were lazy and didn’t care enough. But then Bernie [Sanders] said, ‘No, of course it’s not your fault. You’re not to blame for your parent’s mess.’” Johnson said.

Johnson voiced her passion and admiration for Sanders, “I admire who he is as a person. He’s a genuinely good person, and that is rare to find in politics,” she said.

What made Sanders so admirable to Barr? “Ironically; his youthfulness,” she said. “His authenticity and vision for the future and what’s possible is pretty contagious.”

Throughout much of American politics, young people have drastically low participation rates in the general elections. Consequently, the emergence of widespread support for Sanders could change if he becomes the Democratic nominee.

“If Bernie gets the nomination, it would bring out a wide range of millennials to the polls,” Johnson said.

And if Bernie doesn’t receive the nomination?

“Well, we’ll cross that bridge when we get to it,” Barr said.