Mastery of movement: Finding balance and serenity through Tai Chi 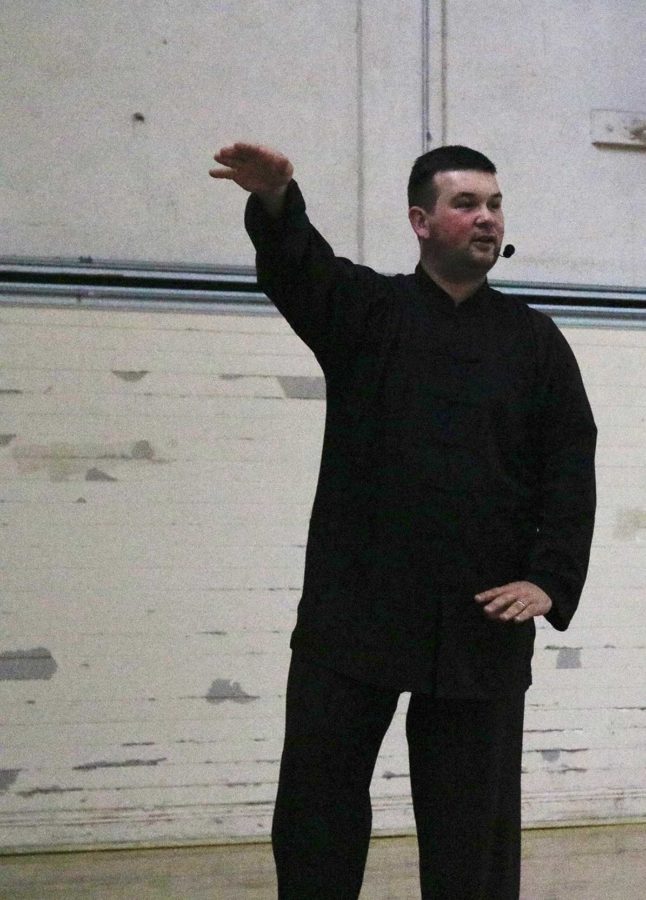 Shifu Justin Eggert instructs his students in breathing and balance techniques to deepen their understanding of how to move freely and maintain their center of gravity.

In a neighborhood of predominately Asian immigrants in the 1980s, he found himself mesmerized by classic Kung Fu films.

Movies like “The 36 Chambers of Shaolin” and “Once Upon a Time in China” ignited Eggert’s a desire to learn martial arts.

“Me and my sister watched way too many Kung Fu movies,” he said. Their mother received persistent pleas to enroll the siblings in classes.

With a working-class family and divorced parents, Eggert was by no means rich. Even so, Eggert’s mother was supportive of his desire for a positive outlet for his energy. They shuffled through the cheaper activities they could find.

In the beginning, Eggert tried Kenpo and Taekwondo but considers his true beginning of martial arts practice when he was 9 and started training in Judo.

At 13 Eggert found his current teacher after studying Judo and Capoeira for two years each.

At this time, in the ‘90s, breakdancing was making a small resurgence, especially among Asian communities. Eggert said he and his mainly Laotian and Cambodian friends would get together and break-dance for five to six hours a day.

As they got older, a lot of his friends started to get more into gang culture and hard drugs like methamphetamine.

“They all got into drugs and that became the focus of their life,” Eggert said. “Being tougher or cooler looking instead of [practicing] their dance. I got more and more into martial arts.”

Eggert found Dong just as he was starting his studio. “He opened a school and I just went kind of nuts with it,” Eggert said.

Dong was a great role model, he said. “I started acting more like him.”

From then on Eggert began spending his summers training with Dong and competing internationally as a member of the U.S. team for traditional style Wushu Kung Fu and Tai Chi.

Eggert recalled that, of his 30 or so neighborhood friends he grew up with, only he and one other person graduated from high school. Seeing the impact drugs and violence had on his childhood friends influenced Eggert to pursue a degree in philosophy.

Now more than 25 years after Eggert’s first martial arts lesson, he is a World Gold Medalist in Health Qigong, a four-time World Sliver Medalist in traditional Wushu-style Tai Chi and the founder and head instructor of his own martial arts school.

Students of all ages and ability gather in Tauzer Gym to practice mind and body awareness, while improving their balance, focus, flexibility and breathing through  teachings in Chen-style Tai Chi.

The course advertises Tai Chi as “A series of flowing movements developed for personal cultivation, health improvement and self defense.”

“He shows us lots of breathing techniques; [Tai Chi] is a lot about movement and center balancing,” Scott said. “It’s kind of relaxing.”

“One of the first tasks to any movement [dance, martial arts] is breaking apart any habits that you created without any theory or are not helpful to the way you want to move,” Eggert said.

Tai Chi and Qigong both incorporate standing meditation. If you can get past the torturous burning of joints and muscles, one can learn to release this tension by ergonomically curving joints, being aware of the breath and focusing on the body’s center of balance.

“A couple of things happen when you get really introspective into your body and mind,” Eggert said.

The center of gravity becomes the center of attention, allowing the mind to process where thoughts travel. “You notice more about the way you carry yourself and the way you interact,” he said.

Part of Tai Chi philosophy is to slow down physically and mentally to allow yourself to become conscious of habits of thought and movement.

“It’s like this really smooth, balanced feeling when that becomes so much a part of you that if you move in a different way, you feel really terrible,” Eggert said.

When the principles of Tai Chi are so prevalent in every action that you can correct yourself with these philosophies, then you have become a master.

“Now you can be your own teacher,” Eggert said.

In 2008, Eggert reached a tipping point when everything clicked. Now, it’s hard for him to do live outside the principles of Tai Chi.

“I can apply this to other martial arts and ways of moving,” Eggert said.

Even as a master, Eggert practices fine-tuning the fundamentals of Tai Chi which he learned 20 years ago. Right now he is working on collapsing the tension in joints that create extreme straight lines in the body. The proper ratio of expansion and extension helps to release this tension.

Eggert said as we grow, we learn patterns but never assess them to see if there is a more efficient way to do them.

Tai Chi promotes ergonomic movement based on the biomechanics of the body.

As an adolescent, Eggert found in Tai Chi and other martial arts a positive outlet to focus on while many of his friends chose less proactive and inspiring pursuits.

In retrospect, Eggert said growing up with these kind of friends has helped him be more understanding and less judgmental.

“Things aren’t so black and white,” Eggert said. “It’s good to remind yourself of that sometimes.”

After over 25 years of training, Eggert has mastered his art, and hopes to provide pupils with a positive outlet as it was for him. Honoring their teacher, his students call him Shifu, or “teacher” in Mandarin.