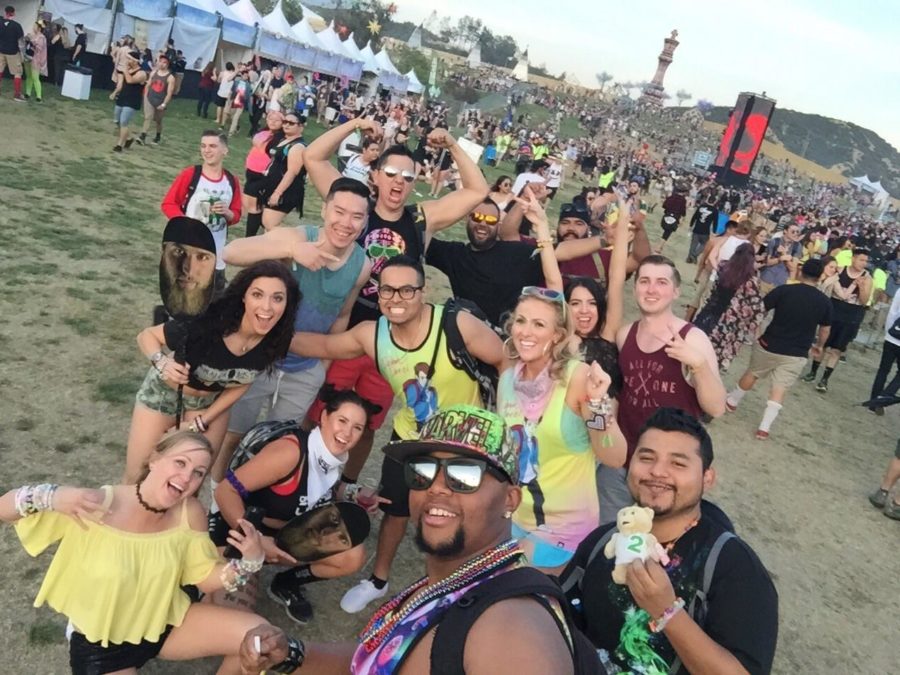 Promoters for EDM festivals encourage meeting new people.There are no strangers at Beyond Wonderland 2016, only friends.

Some may call it a music festival, an event, or even a rave, but Santa Rosa Junior College alumnus Nate Danos refers to it in a more personal sense.

“It may be strange to you, but it’s home to us.” Danos is talking about a culture that has become a huge part of his life and has changed it for the better.

People associate music festivals with negative connotations, such as drugs, sex and a place to party hard.

Some SRJC students are aware of music festivals but don’t partake, while others attend them religiously.

Danos began listening to techno music in first grade after a friend played it for him. Ever since, this genre has been embedded in his soul.

“The moment I was fully enveloped into the [Electric Dance Music] culture was when my friends took me out on my 14th birthday and took me to an underground rave in an abandoned warehouse,” Danos said, “The music, the lights and the atmosphere really impacted my life in general.”

Danos realized what music festivals brought to his life; dancing, lights, friendly people and human connections he would not get in his day-to-day life. He reiterates people are generally nicer at music festivals and you will most likely walk out with new friends, even if you go alone. He’s met people from all walks of life through attending music festivals. These people come from different backgrounds and professions, from college students to CEOs, police officers and nurses and other amazing people.

“One of my favorite experiences that I remember was meeting an old couple attending Electric Daisy Carnival Las Vegas 2015, they were partying harder than anyone in the middle of the crowd,” Danos said.

Danos has dealt with the negative image and stigma which accompanies EDM, or ‘raving.’ Danos believes the biggest stereotype connected with these types of music festivals is the idea people who attend are drug addicts with the intentions of getting completely wasted.

Danos has been going to these festivals for years and knows although drugs are present, the experience is not what stereotypes would claim. He advices people who are curious about attending to try it out and see for yourself what music festivals entail. He reminds people to keep an open mind if one decides to partake in an event. Twenty years from now you will still find Danos attending events, because it’s become an intricate part of who he is.

Eighteen-year-old SRJC student Amanda Borges is currently completing a certificate program to become an X-Ray tech. She has been a fan of EDM since the age of 16. She’s attended all-ages events but has been anticipating turning 18 so she could attend 18 and up festivals. She is attending EDC Las Vegas this summer, which has been her goal to attend for years. Her excitement is through the roof and she is busy preparing while finishing the last couple weeks of school. She connects these events with being able to dance and not being judged by anyone.

“I watched the documentary ‘Under The Electric Sky’ and I was like, that’s totally me, I need to be there,” Borges said.

She goes for the music, the DJs and the people. You can find Borges front row at these events — she loves being close to the DJs and has even touched hands with Skrillex, a well known EDM DJ. When Borges compares festivals and concerts she explains it’s a different experience — everyone dances at festivals way more than concerts.

“Everyone is so friendly and nice,” Borges said.

Borges admits she’s addicted to these events and is already planning her next adventure. She understands that drugs are part of the scene but knows these experiences don’t need to include drugs to have an unforgettable time.

Music festivals don’t only encompass music, but also have a business perspective. Mike Hodgens, 25, and Alyssa Erikson are entrepreneurs of the EDM culture. They are co-founders of the EDM fashion line, Freedom Rave Wear, which is a growing business they are both passionate about. They created their company purely from love and a strong belief in connecting with others through clothing.

“We started making custom outfits, grew by word of mouth, reinvested the income, diversified our offerings and now offer over 250 handmade products on a pretty large scale,” Hodgens said. They look at their apparel in the sense it creates memorable moments between strangers, which can potentially lead to friendships.

Hodgen and Erickson attended their first festival, Nocturnal Wonderland, in 2014. Erickson made a Fire & Ice couples outfit and people loved it. They said they met amazing people that day and their festival experience was completely enhanced by what they wore. The pair asked attendees if they would wear outfits like the ones they created and people responded with a solid yes.

“If anyone is thinking about following a dream, creating a business, getting a dream job, traveling to far-flung corners of the world… and it’s all you think about, then do it! We can’t stand the idea of missing out on this precious life. That is why we do what we do. Time is so valuable,” Hodgen said.

Hodgen and Erickson don’t plan on slowing down and letting go of this passion. They know that EDM culture has the potential to positively reshape generations across the world. This driven couple shows that not only has music changed their lives, but it has also become a lifestyle and a growing business that’s very promising. “Festivals bring people together…we need way more of that right now.” Hodgen said.

SRJC student Stacy Hammond attended Coachella last year for one day. Her friend had an extra ticket and Hammond was excited initially, but that changed once she arrived. Hammond’s friend told her she never left home, and since there was an extra ticket, she should just go. Once she arrived, she didn’t like the people who attended and was bored by the performers.

“I expected not as much puking and drug use,” Hammond said.

She knew there would be drugs, but not to the degree she encountered. She thinks people were too focused on drugs and not the music like she anticipated. She’s open to trying different ones, but will not be back to Coachella ever again. She might be into something on a smaller scale and with artists of her choice.

Christian ‘Los Angeles’ is originally from Los Angeles, but has found himself in Santa Rosa through his love of music and his belief that ‘roses’ are a sign to him. One of his music inspirations is Tupac Shakur, who lived in Marin County once.

Christian used to find music festivals intriguing and attended them in the past, but certain events are not for him. He discovered his dislike for certain genres through his experiences at a variety of music festivals, such as raves. One thing Christian does agree with is that music brings people together and it’s an important part of his life.

All these people have one thing in common: music. With summer on its way, SRJC students can try new experiences that could change their lives.

They can dance their hearts out alongside strangers.

In the words of the music department chair, Mark Anderman, “Music can bring people together. It is a vital element in the defining of nations, tribes, cultures and subcultures.”