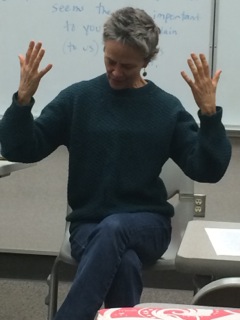 Philosophy instructor Carla Grady is passionate about her teachings in and outside of the classroom.

Balancing a career as a philosophy instructor and maintaining her sanity in a world that’s caught up in rapid progression is what Carla Grady handles gracefully throughout her life.

Born and raised in Berkeley at the peak of the Civil Rights, feminist and anti-war movements, Grady grew up in a strong, socially conscious area, which had a profound impact on her values. “You can probably imagine what an incredible beginning that was,” she said.

Grady studied at the University of Hawaii and later taught English as a second language. She intended to work overseas, but felt there was more work to do in Hawaii.

Not wanting to leave the gorgeous land, she returned to school at 28 to study philosophy. She received her Ph.D. in philosophy from the University of Hawaii and she gave birth to her daughter on the island of Oahu.
Philosopher C.B. Macpherson opened her eyes to philosophy with his theories on possessive individualism. Philosophy allows her natural thinking and analyzing characteristics to become more refined.
While political philosophy is dear to her heart, Grady’s favorite branch of the subject is nondual Asian philosophy. Her favorite quote is from Sri Saraswathima: “Everything is spiritual. Everything is you. Everything is God. The ‘me’ is not the enemy. Without it, how would you know Love?”

Not only is she passionate about conscious thinking, she’s also fervent about the environment. As an instructor at Santa Rosa Junior College, she’s been a part of numerous ecology committees on campus. Some include the recycling committee, which is no longer active. While a part of this committee, she and other members brought recycling bins to classrooms. Since the disassemblance of the committee, there’s been a scarcity of bins around campus. Her goal is to have plastic bottles banned on campus.
Other committees she’s been on include the Institution for Environmental Education, which created the Integrated Environmental Planning Committee that oversees new building construction on campus and ensures sustainability of projects. She also had a part in the sustainability coalition as well as the district facilities planning committee.
While Grady participates in campus committees, she continues her love for the environment throughout her daily life. She focused on sustainability and conservation issues. Her environmentally friendly regimen is extensive. She owns an electric car, nine solar panels and a bountiful garden at her home. She often shops for clothing at thrift stores, is a vegetarian and always has a glass water bottle on hand. She uses recycled paper as much as possible within her classes and at home, and when building a new project around her home such as a fence or deck, she will use recycled materials.

Instead of just limiting her plastic consumption and following the rule of “reduce, reuse, recycle,” she follows her own rule: “refuse, refuse, refuse.”

Grady said she’s hopeful the Earth will survive while inhabited by humans, saying the Earth is in a constant state of change.
As a socially and environmentally conscious person, Grady also has a spiritual consciousness. Spirituality plays a role in her life by saving her sanity everyday.

“Life’s challenges are depressing,” Grady said. “Watching others suffer is draining and if you have no way to cope, it’s even more difficult.” She compares her practical world with the environment and her spiritual world with self development.
Although she doesn’t meditate as much as she would like during the school year, Grady has wise words of advice when meditating for the first time. She explains you shouldn’t expect immediate results because it’s a long process that eventually leads to a greater understanding of yourself and surroundings. The simple act of sitting and quieting the mind is the development you should seek. There won’t always be the same results each time. When starting to explore meditation, it should be a source of fun and spiritual guidance.

“Find what you want to do with your heart, not your head,” she said. Grady believes more people should focus on living in the moment and integrating with the now rather than planning and worrying about the future. “Settle into your heart. Find what you’re good at based on what you love to do.”
Another of her favorite quotes comes from Mooji, a spiritual teacher from Jamaica. “The doer is only a phenomenal idea in consciousness, in order to have the idea that it is doing the awareness. But it is like the characters in a book deciding they will keep writing the book,” Mooji said.

Her personal experiences add understanding to her teachings. “She taught each religion in a way that helped me understand how it’s relevant to me in my journey and those around me,” said Angelica Villaseñor, a former world religions student. “She brought each religion to life with her perspective on each one rather than just stating what the religion is.”
Another former world religions student, Miranda Otsen, said, “It’s so apparent how much she cares about what she’s teaching, and her goal is to really make sure you can soak up and understand the information, not just memorize and regurgitate it for tests. She’s adorable and passionate and just makes it really easy to immerse yourself in each subject.”

The world is ever changing and developing, and it can be overwhelming and stressful. We don’t always have control of what goes on around us and sometimes not even of ourselves and our minds. Grady has a clear understanding of self and is aware of her values and uses this understanding as a stronghold to remain coherent and lucid while living in such a chaotic world.