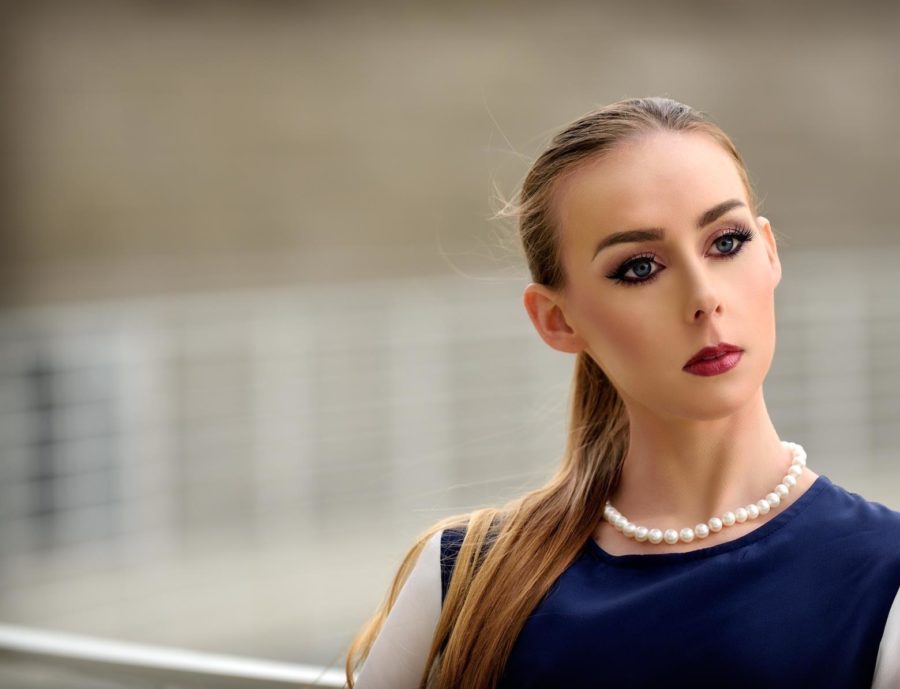 Devon Delzell models clothes by Apoteca. She loves working with the designers on shoots because she adores being a part of their creative vision.

Devon Delzell walks toward the cafe wearing nothing but black; her long black hair trails behind her and her cat eye sunglasses brings the look together.

Delzell, 20, is attending her second year at Santa Rosa Junior College and hopes to transfer to UCLA to major in history, with a focus on Turkish or Asian history. When she’s not studying, Delzell spends her weekends transforming herself into a commercial model. She’s been featured in Vogue Italia Online and worked with local San Francisco designers like Apoteca.

Her modeling career started at a young age. “I kind of grew up with it,” she said. “When I was a baby, my mom worked for a blood bank. And when I was 6-months-old, I was on a billboard of Sonoma County for the blood bank. So that was my first job.”

Karen Delzell, her mother, worked in product development and encouraged her daughter to model, even making her the filler picture for picture frames. Karen also modeled in her early years, which helped Delzell learn how the industry worked.

During her pre-teens, Delzell took a few years off but started again in her teens. She worked her first two years for free before finally getting signed to City Model Agency in San Francisco.

Unlike New York or Los Angeles, San Francisco is gentler on upcoming models. It’s easier to learn the ropes and everyone is professional.

Delzell’s favorite type of shoots are with designers, especially Igna Ojeriene, who designs Apoteca in San Francisco. “I love working with designers because when they show up you can see their creative vision. And it’s just fun to be part of a creative process,” she said.

She couldn’t help but giggle when discussing her hardest shoot to date. During winter, most designers are preparing for their summer lines. She was doing a photoshoot for swimwear in Marin Headlands when the photographer asked if she could jump into the water. She jumped in with no towel on hand and started to model in the icy cold water.

Delzell looks at modeling not as a job but a fun creative task. She knows by age 23 she will be focusing more on school and will likely retire from modeling. She would like to pursue work behind the camera too.

“Modeling is not consistent ever. So there are times when work is very busy and you could be booking every weekend, you know a couple times a week,” she said. “And sometimes it’s very slow, and you won’t hear anything for a month or a couple weeks, and that is kind of discouraging.”

Delzell has been featured on Vogue Italia’s online blog “Photo Vogue” three times. Her first time was due to a self-submission and she counted herself extremely lucky to be picked. “When your photos are submitted and taken by something like Vogue Italia, it’s a confidence booster and a reminder that you’re doing fine,” she said.

Delzell understands different aspects of modeling are expanding and changing within the industry. She believes social media is a great way to get your brand out. It’s also revolutionizing modeling because it’s giving models a voice and brings them to a human level. Delzell thinks that Photoshop is something that will eventually be done away with. The fashion industry has taken strides to represent everyday consumers, and the more people advocate for change, the sooner it will happen.

At 5 feet 7 inches, Delzell is a shorter model. She admires other short models like Kate Moss and Twiggy. Moss inspires Delzell because she showed the fashion industry, “This small girl can work it.”

For girls who want to pursue modeling, Delzell advises them to not get discouraged. “You’re not going to get a campaign right away from sending out your headshots that you took in your bathroom,” she said.

Delzell dismisses the idea models just sit down and look pretty. “It’s like a sport. You have to practice,” she said.