Comic books saved my life: Comic fan turned writer draws from his past 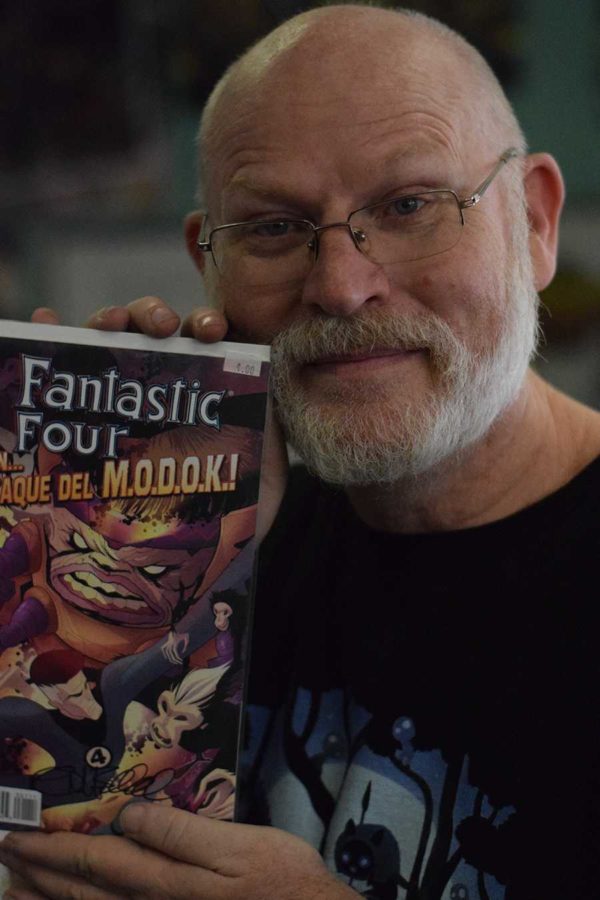 Tom Beland displays an issue of Fantastic Four he wrote. A veteran of the industry, Beland has written for Marvel and DC.

At his lowest point, Tom Beland was saved by the Amazing Spider-Man.

“Spider-Man books got me out of depression as a child,” he said. “I lost my parents – they died when I was young – and those books gave me a break.” Reading about an orphaned kid in a situation similar to his own helped him greatly, and writing and drawing comics have continued to help keep his depression under control.

A Santa Rosa resident, Beland has a long, celebrated career in the comic book industry. His works include independent series such as “True Story Swear to God,” a long-running autobiographical series that has been nominated for multiple Eisner Awards, the highest honor in the comic industry.

He has also written mainstream issues for both DC and Marvel, such as the Fantastic Four miniseries “Island of Death,” and invented the superhero Vejigante for Marvel. Puerto Rican traditions and folk-tales were the inspiration for both the character and the miniseries. He has also written Simpsons Comics at Bongo. One of his best friends, Peter Avanzino, has directed episodes of “The Simpsons” and “Futurama.”

Beland got his start working at a newspaper in the advertising section. “It’s not very artsy,” he recalled, “but you worked with art, which was cool.”
One day, a crisis arose. A last-minute problem resulted in the front page having a massive blank space with nothing to fill it. Beland offered to fill the page with a drawing.

The editor told him the deadline was in two hours.

“Oh. What am I going to do for the other hour?” Beland asked.

Beland’s willingness to rise to a sudden challenge and speedy cartooning skills resulted in his prompt promotion to editorial, although advertising fought to keep him. “It was the first time in my life anyone had fought over me,” he laughed. He would keep the editorial position for 17 years. During that time he made friends who encouraged his comic career.

He began writing his first professional work, “True Story Swear to God,” while he was still employed as an editor. “True Story” started as a newspaper comic for the Vallejo and Napa local papers. He eventually joined his strips into comic books and sold them by hand. Later he found a publisher who combined them all into one volume. He wrote the first true comic issue of “True Story” during the plane ride after running into Puerto Rican radio personality Lily Garcia, while they were both on assignment at Disneyland.

Garcia would later become his wife, and they would spend several years in Puerto Rico together. Much of “True Story” is about their relationship. “I still love my ex-wife,” he said. “We’re divorced now, but she’s still one of my best friends.”

These first comics would lead to Beland’s first Eisner nomination and his first mainstream work: writing for Spider-Man. The web-slinger has remained Beland’s favorite character since he was a child. “To have that character say something that came out of my head is just the weirdest sh*t ever. Still is,” Beland said.

He still has fond memories of his time in Puerto Rico and claims that it deserves more respect from the U.S. Eventually, however, he moved back to the Bay Area when the constant heat and mosquitos became too much to bear.

His personal experiences led to his Fantastic Four miniseries, which received praise for being an accurate portrayal of the people and traditions of the island. Beland recalls long lines in front of comic stores in Puerto Rico when the comic first came out.

Beland’s lifting ideas from the island and his own background didn’t stop there. His latest graphic novel series, “Chicacabra,” is based on the Puerto Rican legend, the chupacabra, and his own experiences with depression, which he has struggled with ever since he was a little boy reading Spider-Man.

“The book is actually about how I handle my depression,” he explained. Instead of trying to conquer or “kill” his depression, he lets it take its course until it inevitably winds down. He equates it to letting a troublesome dog run outside until it’s too exhausted to do anything. “[Then] I’m not bothered by it for like a month, and then when it comes out I just let it out again.”

Similarity, “Chicacabra” is about a girl who has a bloodthirsty creature inside her, and learns a similar method of dealing with it. “She’s not trying to kill the creature inside of her,” he said. “She’s learning to live with it.”

Beland’s favorite artist is also one of his biggest influences – Darwin Cook, who worked on “Batman: The Animated Series” and wrote the limited comic book series “The New Frontier,” which re-imagined DC Superheroes in the 1950s. He considers it “the perfect comic book,” and owns several copies.
“My favorite DC panel ever,” he said, “is when [Wonder Woman] tells Clark [Superman], ‘If you don’t like the way I do things’ – and she leans and just goes, ‘there’s the door, spaceman.’ And I want that on a T-shirt.”

He said he’s never met Cook, although he had opportunities to. “There’s a rule in hockey,” he explained, “that says if you haven’t won the Stanley Cup, you can’t be in the room with the Stanley Cup.”

He attributes the same thing for Cook – until he collaborates with him on a project, he has no right to share a room with the man. “I have the perfect book for him,” he said, talking about a possible one-shot with the Fantastic Four villain Puppet Master he came up with. “[It] would be really fun for him to draw.”

Beland can often be found working on his art at either Brew or Peet’s Coffee, where he spends about two hours drawing. He can also be found working at Outer Planes Comics and Games, where, according to his co-workers, he is always willing to talk to his fans. He likes working at the store because everyone is passionate about what they sell, be it cards, comic books or toys.

“It’s not the kind of store where you walk in and someone’s standing there and goes ‘Eh, I don’t know, I’m not really into that,’” he said. He also helps make short videos for the store that explain little details, such as what comics to start with and how to play Magic: The Gathering.

When asked what he liked most about Beland, Darren Digges, co-worker at Outer Planes said, “The fact that he works in a comic book store, and he’s in the business and has been for years and years.”

Alex Spataro, Outer Planes manager, considers Beland a personal friend, and admires how he always has a kind word to say and is fun to be around, despite his struggles with depression. “I think it’s really cool that he’s able to kind of come out of that shell for other people, it seems, to make them feel better and feel good,” she said.