In between addiction and recovery 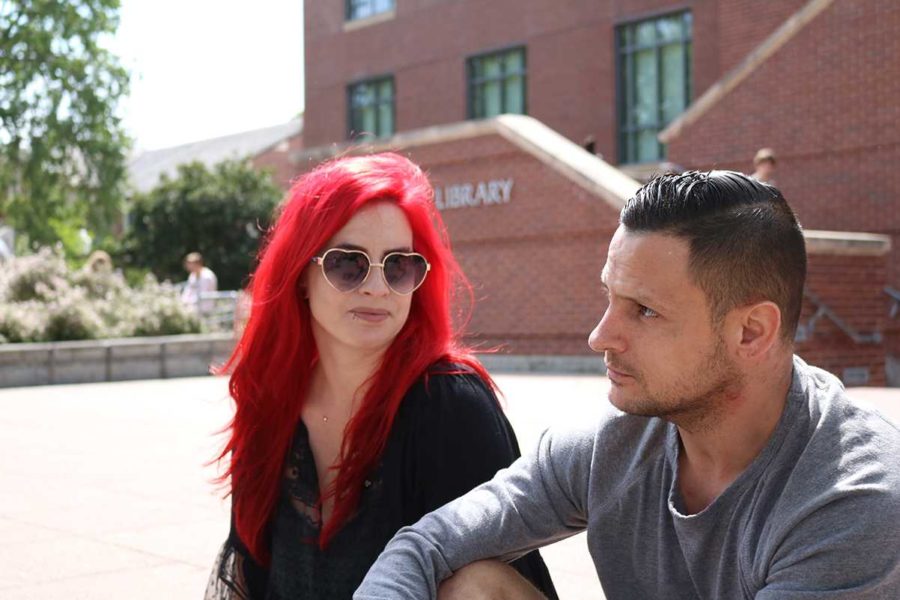 Sarah Magnani (left) and Ryan Sansome (right) are clean and sober after years of struggling with addiction. Their goal is to help students who still battle with substance abuse. The Recovery Club will allow students to open up in a supportive, non-judgmental environment.

Wake up sick. Find money. Find drugs. Use until you vomit or pass out.
Sarah Magnani, 27, shared dark memories of days consisting of nothing more than the chase to find her next fix. She recalled years of living a double life; on one hand she was a college student with a loving family and much to live for. On the flip side, she was an addict.
“Alcohol was my first love, but when I found opiates, it was the love of my life,” Magnani said.
Magnani’s story started with the use of gateway drugs—alcohol and party drugs, just for fun or with a boyfriend, which quickly spiraled into opiate abuse and dependency.
Magnani said she always knew she could not use drugs recreationally. Her use of substances was always extreme. So, when a boyfriend introduced her to methadone – and opiates – she was hooked.
“I didn’t even know that you could get high from a pill. I just didn’t make that connection until I did it,” Magnani said. “From that point on, it was getting and finding ways and means to get more.”
Sarah’s story mirrors many others. With opiate addiction on the rise nationwide, and overdoses at an all-time high, heath care officials are struggling to get to the root of the problem. Emergency rooms are seeing a surge in overdose cases. In the past month, a cheap opiate substance called fentanyl has claimed nearly a dozen lives in the Bay Area and Sacramento.
Department of Health and Human Services suggests the new purer substance has been used for many years in opiate concoctions, but is now being sold as a cheap alternative to heroin. In some cases it has been sold and disguised as Norcos, a prescription pill, without the users’ knowledge.
Fentanyl is said to be 10 times stronger than heroin and 100 times stronger than Morphine. The draw is it’s cheaper to manufacture, which means cheaper to buy. This deadly drug is right at the center of an opiate epidemic expanding across the nation.
Sonoma County has yet to report any Fentanyl overdose cases, but the opiate epidemic is a recent topic of conversation as more and more young, middle class citizens fall victim to opiate addiction.
Magnani said once she was deeply addicted to opiates, she had to be high to talk to people, to present in class or to have normal social interactions. She would do anything to get high, including breaking all her morals.
“I’d steal checks from my dad. I’d do whatever I had to do, sell my clothes or pawn my computer. We think of very creative ways to get money,” Magnani said.
Magnani was living on the edge of total destruction. Although she was working in a daycare facility at the time, among children, she was struggling with a life-threatening addiction. She was quickly losing friends and crossing all her moral boundaries. But she wouldn’t stop. She didn’t care. OxyContin was everything to her, a security blanket.
Things took a turn on Oct. 28, 2011. Magnani was arrested for the sale of narcotics by an undercover task force agent following a residential raid of the home where she and her boyfriend’s family had been selling drugs. Jail was her wake-up call.
“For me, it only took that one time going to jail. I realized I was here because I was a threat to society,” Magnani said. “I couldn’t do it anymore. At that point, I was what they call surrendering.”

Ryan Sansome, 36, a former heroin addict and Santa Rosa Junior College student, had plenty to say about the issue of addiction and even more to say about recovery. Having struggled with addiction for upwards of 20 years, he knows much about the ups and downs of the recovery process and has had several close calls in his lifetime.
“From 8 years old, I was OD-ing and winding up in the hospital. Something about having the ability to escape my mind and body for a bit was appealing to me,” Sansome said.
Sansome’s early childhood was filled with abuse and neglect, which left him to find his own role models and path in life. The likes of NWA, a ‘90s hip-hop group, and movies like “New Jack City” made the cut. With violent and criminal influence at the pinnacle of his childhood development, Sansome was convicted of two felony charges by the age of 12.
Life continued to be a back-and-forth battle between addiction and recovery well into his adult life. Sansome would go on to contract MRSA, a deadly skin infection contracted from needle injection, not once but twice, resulting in the loss of one of his lungs.
“I had a plan. I was going to get a job, go to school and get a girlfriend. But recovery was not a part of my plan. After a single semester at the SRJC, I relapsed,” Sansome said.
Though his intentions were positive, it wouldn’t be until several years later when he escaped his addiction and found something else worth obsessing over; school.
Magnani and Sansome met at SRJC. Through their meeting and the influence of some other key supporters, Sansome was able to find his way into a recovery program.
“I got a whole new life as a result of it. I found a safe place to live, I found a girlfriend, and I focused on my health. And then I realized that I love school,” Sansome said.
Sansome went from a college drop-out to participating in the human services certification courses, to making the dean’s list semester after semester.
Following this spring semester, Sansome is set to complete an internship at the very recovery program that saved him. He has come full circle.
Both Magnani and Sansome have a new goal—use their recovery stories to help others. That is exactly what they have set out to do on campus. The two have worked to bring awareness around addiction and more importantly, help others find their own path to recovery.
“Recovery goes deeper than just personal will; it has more to do with connections to others,” Sansome said.
The duo has set out to establish a campus recovery club to support students who are struggling with addiction. They offer a safe place for young people who fall between service gaps and get lost in a relentless cycle of addiction and recovery.
The group will host a Recovery Night on April 20 in the Bertolini Student Activities Center, which will serve as the opening event for their recovery group.
Both Magnani and Sansome have remarkable life experiences and have come to use their stories to hopefully change the lives of others who want to begin the lifelong process of breaking free from addiction.
“Addiction is right there with me, on my shoulder everyday. But I have a choice. It’s a daily thing — I’m a work in progress,” Magnani said.