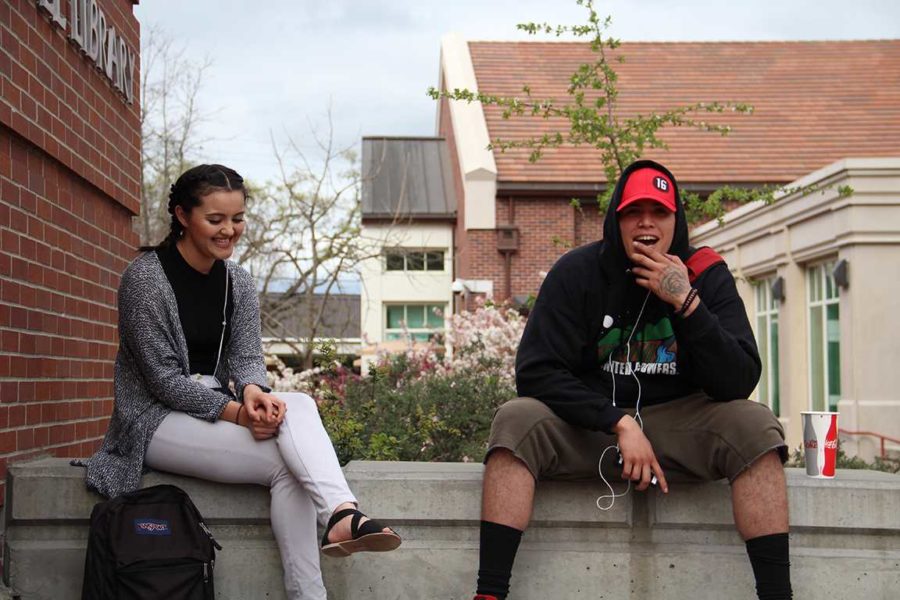 Temperatures are heating up, and to accommodate the warm weather, Santa Rosa Junior College students have spring fever. Students are starting to shed those winter layers and expose more skin. This clothes subtraction attracts more looks, causing hormones to flare and gazes to connect.

Coincidence? Maybe. Or are humans on the same biological clock as the rest of the natural world? Is there an internal timer telling us it’s breeding season?

Everyone experiences this phenomenon differently. Some students described spring fever as a more socially active time of year. Students want to spend more time mingling rather than hiding indoors from wintery conditions.

Cook attributed this feeling to a combination of things. “It’s a chain reaction. Basically it’s gonna happen,” he said.

When asked if she was experiencing spring fever, SRJC student Sophia Haggard said, “No – I mean maybe.” She said she sees people she thinks are “fine,” but her attraction is not overbearing. Even so, Haggard said she believes spring fever is real.

With an array of contraceptive options available in modern society, people have gained more sexual freedom without having to fear the possibility of creating new life. Even so, there are still forces beyond our control, such as the change of seasons, the basic human drive to reproduce and the pheromones to encourage reproduction, which influences our human habits and desires.

University of Michigan’s Micaela Martinez-Bakker, Kevin M. Bakker, Aaron A. King and Pejman Rohani of the Department of Ecology and Evolutionary Biology compiled birth data from the 1960s to 2008 from the United States Vital Statistics and the United States Census Bureau.

When graphed out, the data showed little change over the last 48 years and revealed the majority of births in the U.S. occur from mid-May to November. Martinez-Bakker and colleagues of UM also considered latitudinal variation of seasons while interpreting data.

Lara Omapariola, SRJC art major, described the winter months as “cuffing season” and spring as a time to break up with the formally cuffed because new people are coming around and “you want to show yourself off,” she said.

This change can be observed sitting in the quad, people watching. “The guys walking around hitting on girls,” she said.

When asked about spring fever, SRJC student Aaron Bell-Butterfield said, “As the weather gets nicer, break-up season seems to become more of a real thing. Something’s in the air.”

SRJC student Katie Vanetti, 19, said she’s noticed more people in the quad recently. When asked if she is experiencing spring fever, Vanetti bashfully said yes. She explained how she has a few people she’s interested in. “I’m not looking for a relationship. You know; it’s more of a for fun kinda thing,” she said.

Whether looking for romantic fun or not, the majority of people to be born in Santa Rosa in 2016 will be conceived in the next few weeks, if they’re not already in their first trimester of pregnancy.

Somewhere between “cuffing season” and summer love, babies are being made.

Sydney DiMartino is currently in a relationship, but agreed the nice weather has affected her mood. She said she wouldn’t be surprised if other SRJC students are feeling the affects of spring fever. “Every day you kinda see students all over each other,” DiMartino said.

Spring fever is not a newly recognized condition;  the term has been used since the Victorian period. Nineteenth century poet Alfred Lord Tennyson used it in his poem “Locksley Hall,” where he stated, “In the spring a young man’s fancy turns to the thought of love.”

Tyler Burt-Mclaughlin and Jenna Ellis started dating in the beginning of the semester after she asked Burt-Mclaughlin to help her study math. Ellis said she believes in the hormonal aspects of spring fever.

SRJC human sexuality instructor Dr. J. Davis Mannino confirmed that spring fever is more than just a state of mind, “But rather a drastic adjustment in our internal composition,” Mannino said.

“The transition into spring is a physical process that occurs due to changes in hormones and release of pheromones in part triggered by weather.”

As Mannino described, the natural world affects us in many of the same ways it does other animals.

What makes us different is how we choose to communicate our desires. Whether experiencing spring fever or not, all asked agreed that when it comes to approaching a prospective date, being respectful is most important.

SRJC student Bianey Equibel said respect is important to her. Equibel said she is attracted to confidence, but not when it comes off as too aggressive or cocky.

So as spring fever sets in and the urge to meet new people or search for a sexual partner takes hold, the advise of someone who has lived through 70 springs is invaluable.

SRJC student Mary Mcallister, 70, recommends students look up from their iPhones and pay attention to surrounding people. “Smile at them and if you see someone that you’re sort of attracted to, don’t be bashful. Go and say hi,” she said.