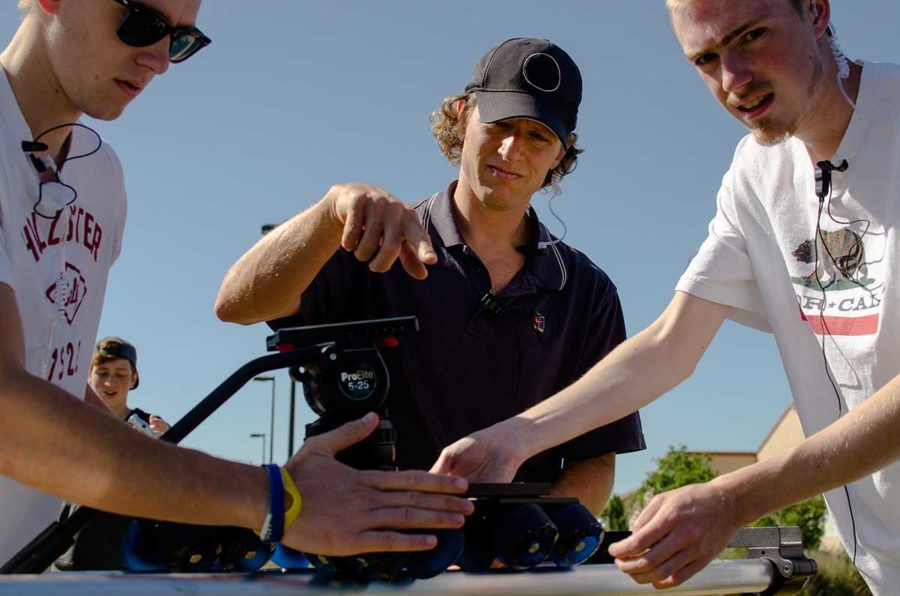 Brian Antonson works and instructs students during an onsite shoot for his introduction to filmmaking class.

Nudists walking around in broad daylight, Jersey Shore cast members getting their spray tan on and spirits lurking in the distance. What do they all have in common? They were all filmed by cinematographer Brian Antonson.

From filming TV series like “Paranormal State,” to teaching students cinematography. Antonson has led a fulfilling life behind the camera; now he passes on his knowledge of the film world to Santa Rosa Junior College students.

Antonson gets up at 4:30 a.m. and takes a nearly two hour bike ride to campus. He sets up his classroom and teaches students about cinematography and media studies using his film industry experiences.

From 1989-1993, he studied filmmaking at Notre Dame University where he took classes in screenwriting, cinematography, editing and critical studies. After that he attended New York University from 1995-1997 to study with media theorist Neil Postman. He began teaching film at DeSales University from 1999-2002.

Antonson’s main interest through and after college was writing, but couldn’t get paid work. One of his earliest jobs was working on a Fox TV show called “Van-pires,” which was about vans that turned into vampires. The show was shot on super-16mm film in Silver Cup Studios in Long Island City.

“[The show] ran for just two to three episodes before it got canceled,” Antonson said.

The director of photography for the show, Derek Wong, was experienced in Korean martial arts action films. He was new to America, working on a non-union crew in a union studio. A week or so into production, the union came in and told the union crew people on shoot to walk out. Wong was not in the union and didn’t know anything about it.

Antonson was a 23 year-old production assistant with a bachelor’s degree and a master’s degree, getting coffee and doing whatever he could to make himself feel useful.

“After the walkout, there were only a few of us on the crew left,” he said. “Derek looked around and asked ‘does anyone know how to load a 16mm film mag?’ I had shot my thesis film on 16mm. so I raised my hand. Derek said, ‘you’re in.’ And that’s how I got into the camera department.”

Antonson shot for CBS News on and off while shooting multiple TV series from 2000-2012 and CNN from 2000-2014. Two notable pilots he shot were MTV’s “Jersey Shore,” which was first called “Guido Beach,” and “Buying Naked,” a TLC show about a real estate broker who deals exclusively with nudist properties. He was director of photography for shows on different networks. His two favorites are A&E’s “Paranormal State,” which follows members of the Penn State Paranormal Research Society as they investigate strange and unusual phenomenas across the country, and IFC’s “Z Rock,” which centers on a heavy metal band that makes a living by day as performers at children’s birthday parties.

“‘Paranormal State’ was extremely interesting, because there was very little influence on the show from the producer side of things,” he said. “We shot it like a documentary, following this team of paranormal investigators into all sorts of bizarre situations. They took themselves and what they were doing very seriously, as did their clients. We experienced some pretty weird events and a lot of very scared people.”

When filming “Z Rock,” he got to work with comedians like Joan Rivers, Patrice O’Neil and Jim Norton. He found it challenging to shoot because there was a lot of improvisation. But he loved that the locations were in and around New York City.

One of the craziest encounters he had on set was when shooting “Paranormal State.” He rushed up a hill to get a shot, only to discover that the hill was an Indian burial ground. He was told to step foot on it was sacrilegious and would cause the trespasser to be cursed.

“I went back and asked the spirits for forgiveness. That was more ignorance than crazy,” Antonson said. “Having to spend the night, sometimes alone or with just one or two people, in a location considered to be haunted or cursed, most people would consider crazy. But I did it over and over on that show.”

Though he loves filming TV series, sometimes it took a toll on him. Cameras were heavier 10 years ago and rigs were 30-36 pounds. He would have to take ice baths sometimes after long shoot days because his shoulders and back were wrecked. “Paranormal State” was a documentary-style show that consisted of 16-18 hour shoot days, most of which was shot with handheld cameras. Another issue was being away from his family. He was away more then he was at home. At first it wasn’t a big deal for him, but as his kids grew older, it became more of a problem. Eventually he shifted to local news and teaching in Petaluma to spend more time with his family.

“Being with my family was a priority,” he said. “I started off shooting at CNN and I moved my way over to CBS and eventually got a staff job as a cameraman and editor in New York. Now that I am back in the teaching world, it is a great balance because I can be home most of the year and only work and travel a few months out of the year.”

In 2012, Antonson came to Sonoma County to teach cinematography at SRJC, but still makes films. Having a creative and professional life is vital to him personally and it is important for being an effective teacher in his field. In the fall he teaches Media 19: multi-camera Studio and Journalism 55: multimedia journalism. In the spring he teaches Media 22: screenwriting and Media 21: inter-media digital filmmaking. Every semester he teaches Media 20: introduction to digital filmmaking on both SRJC campuses.

“It’s super fun and also gratifying,” he said.  “Makes me feel really good when a lesson or a day of teaching goes well and things click with my students.”

His priority is to stay current because he believes old theories and outdated equipment may bore his students, and he wants to help them find a job in the industry.

He tries to balance the art and the science of digital storytelling in his classes so that students won’t just learn what buttons to press, but also how to use tools in creative ways. To him it’s a complex art form, and classes barely scratch the surface of what there is to learn. He hopes his students gain a sense of confidence in themselves as artists and learn to work together.

Digital filmmaking and journalism major Kyle Schmidt has taken Antonson’s classes over the last two years. He has taken Media 20 and Journalism 55 and is currently taking Media 21 and 22. Schmidt has nothing but praise for Antonson and considers him more of a friend than a teacher.

“Brian is the teacher every student prays for,” Schmidt said. “If it weren’t for him I wouldn’t be where I am today. He has showed me so much in the past two years, and his teaching will further influence students to come.”

Chantelle Bogue a psychology and graphic design major, has taken Media 20 and 21 with Antonson and says he’s very knowledgeable when it come to the different gear that SRJC offers.

“Brian is a very attentive teacher. He’s very detailed with his critiques, but also very sensitive,” Bogue said. “He’s a great teacher to talk to about creative experiences and given his experience in the field he’s a great example to follow. Taking digital filmmaking classes at the JC broadened my knowledge of the industry.”

Multimedia instructor Jeffery Diamond said that Antonson made an impact on his students.

“Brian has transformed the digital media video program,” Diamond said. “He stimulates and energizes his students to achieve their highest creative visions.”

Antonson thinks achieving a balance in life is most important, and something that’s a constant goal to strive for. When he has time off one of the things he likes doing is watching movies every chance he gets and loves playing card games with his kids.

“You don’t want to be a work-a-holic and never stop to enjoy life and the little things and be grateful for your life. But you also don’t want to be passive in life and just watch as things go by; I don’t anyway,” he said. “Making time for work, for family, for friends, for self-mind, body and spirit –that’s a life challenge.”

In his time off teaching this summer, Antonson plans to shoot a new paranormal show. It’s a genre he loves and looks forward to working on. He also has a horror-action feature film script he’s working on about how evil spirits permeated the early Catholic church and shifted the focus of the Bible and religion. He hopes to finish by the end of the summer.

“ It’s super weird and I have no idea how I got into the head-space to be writing this sort of genre movie,” he said. “But that’s what’s been coming out when I write.”

With his classes, he hopes to pass on his knowledge of his experiences and guide his students into the cinematography industry.