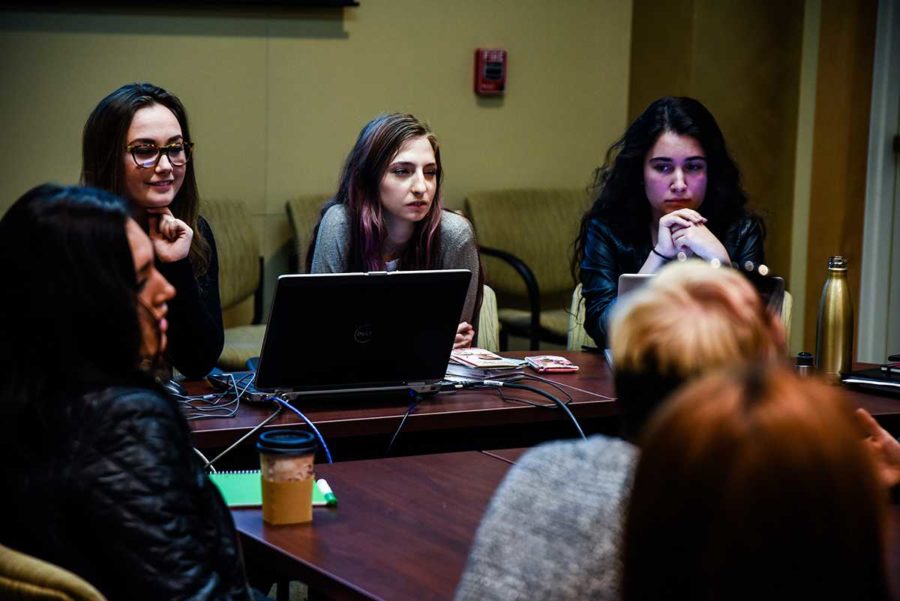 Hannah Cagle (center) leads one of the Feminists United club meetings, held every Wednesday at 7 p.m. in the Bertolini Center for Student Leadership.

Even before 19-year-old Hannah Cagle became active in social issues, her underlying basis in life was to help others.

“My philosophy is do things that are going to ultimately help people, not harm them,” the Santa Rosa Junior College student said.“Look for the benefits: what’s gonna make people grow, what’s gonna help them succeed and what’s the best for the most amount of people to be happy?”

She first majored in elementary education as a strong supporter for education, but switched to political science towards the end of the fall 2015 semester after realizing politics are her passion.

“When I started doing student government and club stuff, it made me realize how much I really love doing this,” she said.

“It was such a good class and it broadened my perspective,” Cagle said. “ I already knew a bit about feminist theory and the history of racism, but it gave me more depth on how we treated race and gender in the U.S. and that really resonated with me.”

While enrolled in the class, Cagle became more captivated by the intersection of all social issues during the rise of the Black Lives Matter movement sparked by the shooting of Michael Brown in Ferguson, Missouri.

“I had no one around me who saw the world the same way I did and was passionate and interested in learning more,” Cagle said. “So I decided to start a club and see if anything happened.”

Cagle first thought of starting a feminist club after realizing there wasn’t one at SRJC.

“I’ve always been for women’s equality and empowerment. It was always there lingering, even from a very young age,” Cagle said. “I just didn’t really know what it was. I didn’t really call myself a feminist probably until high school.”

The Feminists United club was activated during an Inter-Club Council meeting in spring 2015.

Cagle held meetings over the summer, even though the club did not have a large turnout. She was determined to have a strong foundation for the fall semester.

“From there, we started to get a lot more club members and support from the JC community,” she said.

Feminists United concentrates on intersectional feminism which looks at social labels like race, religion and sexuality when talking about feminism.

“It addresses more issues, not just one,” Cagle said. “No one lives single-issue lives.”

The basis of the club remains the same as many past feminist movements – social, political, and economic equality of the sexes.

The rape on campus last semester sparked the club’s activism within SRJC’s community. Feminists United created and hosted the first Take Back the Night event that dedicated a day to sexual assault awareness and provided a safe space for sexual assault survivors.

Cagle and club members came up with the idea for the event after hearing the concerns of many SRJC students about their safety during night classes.

“A lot of the conversation regarding [safety] was how you should handle yourself walking around the JC at night. It was more pressure on the potential victim than the people who were perpetuating the crimes,” Cagle said. “I got frustrated by the conversations surrounding it and I wanted something more in support of the victims and talking about how we can change it by changing our actions regarding getting consent.”

Feminists United club faculty advisor Jill Kelly-Moore believes the issues the club has raised are important for both genders.

“[Cagle] seems to be doing a very good job in her role,” Kelly-Moore said.“I find her to be thoughtful, measured and caring.”

Although Cagle leads Feminists United, the club’s efforts have and continue to be a collaborative effort between SRJC students and faculty members.

History instructor Bruce is one of those faculty members who examine race, class and gender with the understanding these aspects are interconnected.

“I would hope that the impact for [Cagle] would be a deeper appreciation of the historical roots of gender bias and therefore a clearer path to advocating for effective equality,” Bruce said.

“I was kind of hesitant. It’d be another responsibility and I was afraid I wouldn’t be able to handle it,” Cagle said. “But I went for it.”

During SGA’s summer retreat in July, SGA voted Cagle in to fulfill the position.

“I really am an advocate for health and wellness and [health] is one of my things besides feminism,” Cagle said. “They often go hand-in-hand too, so it seemed natural for me to go for that position.”

As an advocate for student health, Cagle’s goal is providing easily accessible resources for SRJC students to be healthy. One of Cagle’s first goals is to have the letters ‘Student Health Services’ be put on the Race building.

“There’s so many students who have no idea where it is. That’s just one start; people being able to know about what services are available,” Cagle said.

While being physically healthy is important, Cagle also believes a holistic approach on health is vital for students.

Cagle admits, as a student, it is challenging to remain healthy.

“I do this in my own life; I neglect my health when I’m worried about finals or something. Sometimes it’s easier said than done,” she said.

Cagle remains healthy through small habits like drinking a lot of water and tea throughout the day and getting eight hours of sleep each night.

“It’d be stupid if I was like ‘eat healthy and exercise and take care of yourself ‘ and then I went ahead and just did the opposite,”  Cagle said. “I’m not perfect – no one is – but I definitely try my best.”

Cagle is currently working to prevent sexual assault through a resolution that would ultimately require SRJC students to attend a sexual consent workshop or a one-weekend class as part of orientation.

She has pushed for this resolution since starting her position as an SGA officer. She believes SRJC could set the precedent for other community colleges, if the resolution was to pass.

“It’s a growing issue on college campuses. It’s not getting better. If anything, it’s getting worse,” Cagle said. “Although the JC does not have dorms, it’s still an issue that affects people within and outside of the college community.”

Ideally, Cagle believes, the resolution would get SRJC to hire staff and create a curriculum to enforce it.

“A lot of people think they don’t need it, but there’s a lot of misconceptions about what sexual assault and what consent is and that’s dangerous for a group of mostly 18 to 24-year-olds who are just figuring out life,” Cagle said.

At 6-9 p.m., Feb. 24 in Bertolini Student Activities Center, the Feminist United club will host Take Back the Night Part II to furthermore discuss sexual assault with topics such as slut shaming and victim blaming.

Cagle and Kerr worked together for the upcoming event.

“[Cagle] is by far one of the most educated student leaders in regards to feminism. I’m impressed with her leadership especially since she’s new this year,” Kerr said. “Her influence has been incredibly positive.”

Cagle’s recognizes how much she’s grown from being a new student learning new social concepts to the strong leader and activist she is now.

“I’ve definitely grown a lot, but it’s also super humbling at the same time. I meet so many people who are doing really great things. It’s an inspiration to me,” Cagle said.“I learn a lot about myself when I help other people.”