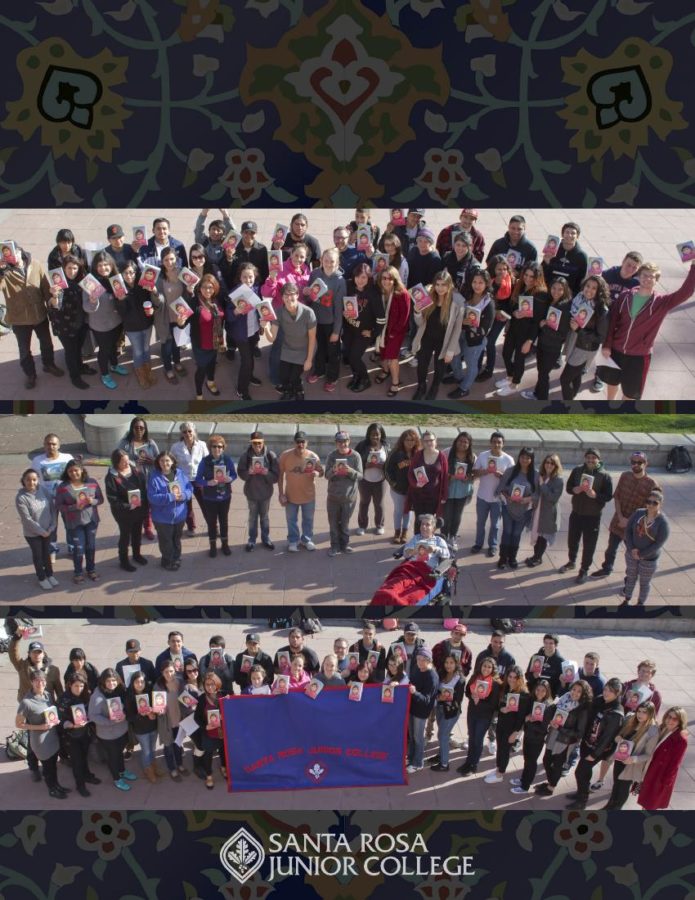 SRJC students pose with “I am Malala” for the cover of their book, “Letters to Malala.”

Your book made me ask myself how big is my world? Do I live in a small town where I see everybody at the local church and grocery store and ask about how they are doing? Or do I live in a big city without hope of meeting even a fraction of the people living there? Have I traveled across the country or maybe the globe to expand my horizon? I find that it is easy to only concern myself with trivial things, essentially living in a bubble isolated from the trouble of the world. I thought I was fairly connected to most of the world through online websites filled with content and discussions from people all over the world; however, reading I am Malala showed me how short sighted I am. Your book changed my perspective of world peace and my role in it. My first realization was that I wasn’t as informed as I thought was when I read about the flood in your book.

Steven Guido wrote the above in his letter to Malala Yousafzai.

Malala, girls’ education activist and the youngest Nobel Peace Prize recipient, wrote a memoir titled, “I am Malala,” about her experience fighting for women’s educational rights. Santa Rosa Junior College students wrote letters to Malala in which they shared pieces of their lives. They compiled the letters into a book: “Letters to Malala.”

SRJC Reads — a college-wide program that invites staff and students to share reading curriculum, generate knowledge and learn together — chose Malala’s book to read for the 2015 school year. SRJC instructors Leslie Mancillas, Ann Foster and Karen Roche collaborated and brought together 70 student letters to the Malala. The students participated in their English and college skills classes.

The idea belongs to Mancillas. “She is committed to having students write for a live audience, which I think is terrific,” said Foster, English instructor and SRJC Reads director. Foster said students were generally excited about the project but a tad nervous about making their writing so public. Upon completion of the project, students expressed their appreciation to have the opportunity to share their thoughts, questions and ideas directly with Malala.

Malala wrote her memoir a year after a member of the Taliban shot her in the head when she was 15 in 2012. In 2014, she was the youngest Nobel Peace Prize recipient for her effort in fighting for women’s education rights worldwide.

College skills instructor Mancillas said students could to relate to Malala’s struggles. Many college skills students have serious problems with family, health and finances. Malala’s story is about overcoming obstacles and not giving up. “It has been very empowering for the students because many of them at the beginning of the semester were being challenged to become better writers, and now they are part of a published anthology,” Mancillas said.

Students will read their individual letters at a free event at 7 p.m. Feb 25 at Copperfield’s Books in Montgomery Village. SRJC President Dr. Frank Chong, faculty and students will join.

“Malala’s story is both moving and powerful. Many of our students can relate to the struggles and obstacles Malala experienced,” Chong said. “I read the letters that our students wrote to Malala and I would think that she would find the letters equally moving and inspirational.”

In her letter, Ruiz wrote, “I believe that our major connection is being religious and caring so much about our family, and to always have them as first priority. I believe that standing up for what’s right is such a brave thing to do because there will be people that will support you or others against you. You are such an inspiration at your age I feel that I wouldn’t have the strength to tell the world what I believe in because I’m a very shy and a small person. Thank you for reading my letter and I wish you the best of luck in your future goals.”

Ruiz related with Malala in that both women stand up for what they believe in. “That would be me standing up for immigrants trying to get some sort of justice here,” she said. Her parents came from Mexico but she was born here. She has participated in marches for immigrants’ rights since she was a child. Ruiz will continue to be an activist for undocumented citizens.

Writing the letter motivated Ruiz to continue pursuing further education. She realizes that attending college is a privilege not everyone has.

SRJC student Gary Kobrofsky, 52, is dyslexic. Reading and writing can be a challenge for him. After participating in writing a letter he is more confident in his writing.

“I think it’s very cool to share with people and say I have a letter in a book and we’re having a big book signing. Kind of exciting for someone who can’t even write or read really,” Kobrofsky said. He related to Malala’s memoir, the idea of what she stands for and what she is working towards.

In his letter,  Kobrofsky wrote, “I really love the way you are so passionate about making sure all girls around the world have the right to obtain an education. You are so brave standing up for what you believe in, even after being shot on your way to school one day for your beliefs. I really like that fact you don’t let fear or intimidation from others stop you from working on your dreams.”

Student Sharon Anello, 50, wrote a more personal letter to Malala.  In her letter, Anello  wrote, “I am a recovering alcoholic and drug addict. My addiction made it impossible for me to pursue my education. I feared not being smart enough, and being to old, and what I feared most was, not staying sober and working an honest program. I think having these struggles has made me more passionate about my education and given me the strength to work an honest program in recovery. It has given me courage, not to give up. I noticed that you stayed strong and brave, while you were hospitalized, and you never gave up. These challenges in life are what make us who we are today.”

Now, Anello attends SRJC to become a drug and alcohol counselor. “I thought it was interesting because she fights for girls to have an education, and I’m 50 and just got back to school,” she said.

She has a spirit similar to Malala. “If you don’t fight for what you believe in, you’re never going to get anywhere in life,” Anello said.

Anello recognizes Malala’s story is important and can impact other young women going to college and broaden students’ perspectives. “Some students say ‘Ah I don’t want to go to school today,’ and here this girl is begging to go to school and she was shot for it,” she said.