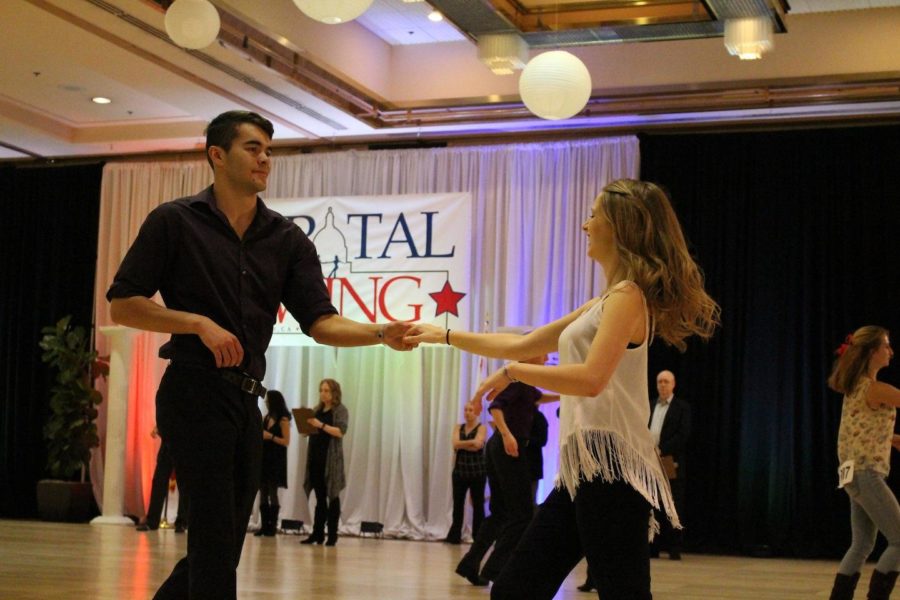 For pro dancers it’s a chance to showcase what they’ve worked so hard for and gives others the opportunity to learn and dance with more experienced dancers throughout the night. Capital draws in a large crowd, varying from high school students to senior citizens.

Unlike East Coast Swing or traditional swing, West Coast Swing is an extension-compression partner dance with the potential to be contemporary or classic. Since it has both a six-count and an eight-count basic, it can be danced to almost any genre.

Dancing brings to plate a little something for everyone. Warren Pino co-owner of WnY Warehouse in Novato, explained he was introduced to dance shortly after a life-changing event. “About 20 years ago my friends told me I needed to get a social life,” he said.

Dance brings a sense of community. “Under one roof there will be teenagers to people in their mid-70s for the one love of dance,” Pino said. “I have met people all over the world.” He said people come to the warehouse from across the globe, and it’s one of his favorite things to hear tourists say in their broken English how much they love it.

Dance has many benefits. Pino said dance has enriched his life in ways he could have never imagined. “One, it’s healthy. It’s not built around drinking. Two, it’s good exercise. And three, it’s good for the brain. I may be the oldest all-star in the world. It [dance] keeps me young,” he said.

The annual Capital Swing Convention has a rich history. It’s run by the Capital Swing Dancers Club, founded in 1984, and is one of the oldest swing clubs in California. Four years later West Coast Swing was announced as California’s state dance. The club organized its first convention in 1992.

Jack ‘n Jill is where competitors all dance at once to the same song.  Generally there are three different combinations where dance partners and songs are unknown and random.

For Strictly Swing the competitor gets to choose a partner ahead of time, however the song is still unknown.

Rountine competitions are for the highest-level dancers. They meticulously plan out and choreograph a dance to one song which showcases their skills in front of the entire convention.

Pro dancer Sean McKeever felt nostalgic as Capital was the first convention he attended in 2006. McKeever said he was learning the basics of ballroom dancing for a few years before a friend suggested he come to Capital, where he saw West Coast Swing for the first time and started learning how to do it.

“I think what makes this event stand out from other ones in a general sense is that it’s really historical. It’s one of the older events in the community,” McKeever said. “There are new events popping up every year, but this has been around for a long time, and it’s run by one of the oldest swing clubs in the United States.”

There are also age categories. One of them is “Juniors,” which is under 18. Here one can see a wide variety of dancers. Ben Porter, 17, and Shelby Nelson, 14, stood out among adolescents. Ben is experienced enough to qualify in the all-star division while still young enough to compete in Juniors.

Grant Howell, a senior in the Nordquist dance program, came in first place for the Beginning West Coast 101 Competition. He said he started West Coast Dancing recently, but he had five years of ballroom dancing experience. After being asked what makes a good dance, he said, “When you mess up, just laugh it off and keep with the flow.”

It doesn’t matter whether you have been dancing for two weeks or 20 years, Capital has something for everyone.