Love in the millennial age 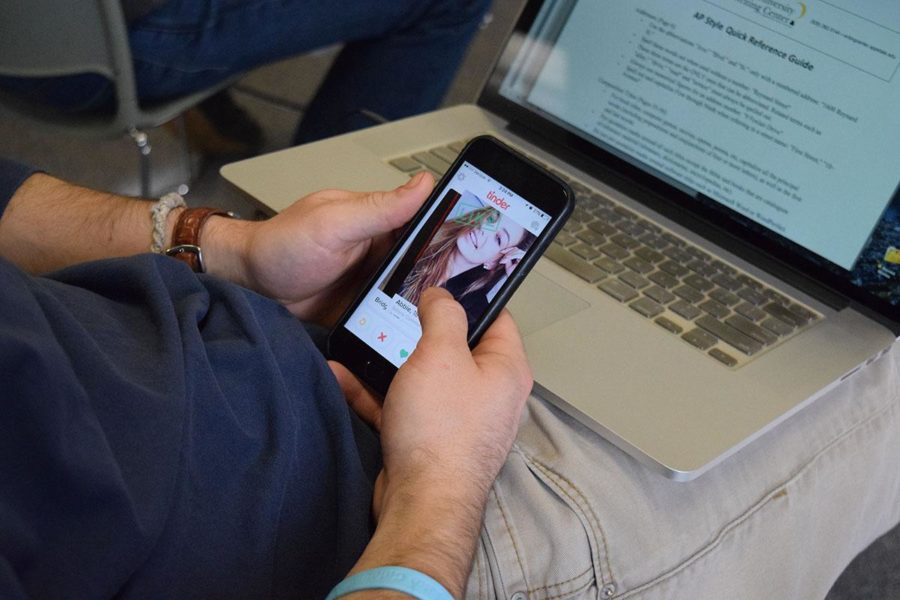 An SRJC student takes a break from taking notes to look for potential love matches during a classroom lecture.

With an abundance of phone applications, dating websites and social stigma about commitment, Santa Rosa Junior College students are swiping away during class or meeting love matches in person and rethinking what relationships and commitment means to them in the millennial age.

Sustainable agriculture major Cuahtemoc Landeros said it’s important to experience a plethora of dating to understand what works best for different personality types. “There are 31 flavors when you go to the ice cream store,” Landeros said. “Do you always get the same flavor? You got to switch it up a little, right? I wonder what bubble gum’s like or oh hey cinnamon.”

The 29-year-old said he prefers to meet people in person because he can’t read body language or facial expression through phone applications like Tinder. “Yeah, I’ve Tinderized a couple of times. I’m better face-to-face,” he said.

Meeting organically is easy. “Just be like, ‘What’s up stranger? how are you doing?’ As long as you’re not creepy, I guess it’s cool,” he said.

There’s a fine line between complimenting and being a creep, according to Landeros. “You have to be very sensitive when you’re commenting on a woman’s physique,” he said. “You don’t know people’s story as far as how they feel about their birthday suit.”

Landeros said for him, there’s no social stigma about having a Tinder account. He thinks it could help those who are too nervous to start up a conversation in person. “If you were really bad at talking to people, it could be good,” he said.

For SRJC student Aleks Eklund, initiating a conversation isn’t a problem. She’s never tried online dating; she prefers to talk to people in person. “If I think they’re cute, I talk to them. It’s not that hard,” Eklund said. “My parent’s always told me never use apps for stuff like that. Person to person is a lot better.”

Some students found that online dating can lead to disappointment once you meet in real life.

Claudia Ruiz, 18, said it would be hard to meet someone genuine online. “We have all this technology and people tend to be fake on their profiles saying ‘I’m this type of person’ but when you get to meet them, you realize they’re a whole different person than they say they are,” Ruiz said.

Though online dating is out of the question for Ruiz, she would consider using an application like Binder, which is Tinder in reverse. The app will text or call your lover and break up with them with messages like,“It’s not me. It’s definitely you.”

“I think I would benefit from that,” she said.

Ian Johnson, 19, tried Tinder but doesn’t take it seriously. He’s never met anyone he’s matched with in person. “Tinder is fine to waste time on, just swiping left and right,” he said.

Johnson said friends who’ve met their matches in person discouraged him from meeting anyone on Tinder. “They all said it was a pretty weird experience. It wouldn’t be natural,” he said.

Instead he prefers to meet face-to-face and start a friendship that could lead to a monogamous relationship.

Johnson may be in the minority for millennials ready to commit.

Human sexuality instructor Dr. J. Davis Mannino said the reason millennials don’t commit is because they are more passionate about other things. “I think millennials are more laid back about relationships. Relationships are not the ‘be all and end all,’” Manino said.

Art major Cory Oleson, 26, said something as minimal as being part of two different eras of technology can play a role in commitment expectations.  “People who live in a smartphone existence live a faster paced life, because there’s more information flying by them at any given time,” Oleson said.

According to Olesen, these people aren’t likely to click with those who grew up watching Disney movies and chase a happily ever after.

“One person will think children and marriage and the other person will think, ‘Who’s the next person I’m gonna Tinder with,’” Oleson said. “There’s a gap, and it’s not a good or bad thing.”

Another reason Olesen thinks those his age have trouble committing to  relationships is because they would rather move on to a new person than fix  existing relationship problems. “That’s part of our throw-away consumerist culture,” Oleson said. “Everything’s moving that direction, whether that be dating, the house you live in or the car you drive. You throw it away once you don’t like it.”

For psychology and art major Natalie Mar, 26, it’s the opposite. Growing up, her parents encouraged her to work as hard as she could to make it work with her partner.

“A lot of my friends seem really petty about why they don’t want to be with someone. They’ll say, ‘They’re really great, but there’s this or there’s that. We could work it out, but I don’t want to deal with it,’” Mar said.

She admits there’s only so much she can do on her part and there have been times when she couldn’t make a relationship work. “You can give as much as you want, but if they don’t want to, you can’t make it work,” she said.

The high divorce rate is another reason Mar thinks people her age are scared to commit. “They may have seen their parents, grandparents or aunts and uncles not working out,” she said. “The experiences around them haven’t been the most positive, and they’re afraid to go through that pain.”

A 2014 blog post by the United States Census Bureau explained that because life expectancy rose to nearly double from 1890, the American population is making a commitment earlier in life. Americans today are only waiting one-third of their lives before getting married, compared to waiting more than half their life span in1890.

Divorce rates may be up due to people having to commit for longer than in the past.

According to Mannino, 50 percent of marriages end in divorce within five years for many reasons, one of which is women no longer need to look at marriage as a source of survival.

He said millenials are choosing to wait to get married due to persuing careers, education, travel and adventure.  “As I tell my students, that institution may be bankrupt. It may have to be  demolished and rebuilt,” he said.

Some SRJC students are taking their time to get married.

Accounting major Juan Macias has been with his girlfriend for two years. “We treat each other equally. She’s my best friend, she’s my girlfriend, she’s someone I can count on,” Macias said.

Though the two are committed to each other, they aren’t in a rush to get married. Macias would prefer to finish school and make a career for himself before he’s married and starts a family. That’s five to seven years away. “Marriage is going to be later on. We still don’t know when,” he said.

Others see marriage as optional.  Haylee Moss-Thayer’s parents never got married. The 19-year-old journalism major said she would like to get married eventually, but doesn’t see it as something she needs to do. “If it happens cool. If it doesn’t, whatever. It’s not super important to me,” Moss-Thayer said.

Sociatal pressures to get married are diminishing, according to Moss-Thayer. “More and more people aren’t getting married and are choosing to stay single,” Moss-Thayer said.

Being successful is more important to Moss-Tahayer than getting married. While she would like to have both a relationship and a career, the latter is most important.

“If a relationship were to hinder my career or what I wanted to do in the future I would probably get out of it,” she said.

Regardless of statistics, there are those who still believe marriage should only happen once.

SRJC psychology major Kellen Hanson, 24, believes in eternal marriage. “What we in the church believe is that when we’re married, we’re not only married in this life, but in the next life,” Hanson said.

He and his wife Brittni Hanson, 20, have been married for two years. Although neither thought they would get married as early in life as they did, they knew it was the right move.

“She’s my best friend. I wanted to live with her and share everything that I had with her,” he said.

The pair corresponded for two years while Hanson was away in West Virginia on a mission for the Mormon Church. “Almost every week I received a letter from her and we were able to maintain a friendship that way. As soon as I got back I asked her to be my girlfriend,” Hason said. “Our first date was the day after I got home.”

He said that though there might be trials or disagreements in a relationship, they can be overcome by love. “The odds will always be in your favor if you really care about the person that you want to be with forever,” he said.

For Brittni Hanson, the best part about being married is the support she receives from her partner. “I will always have someone I can depend on for anything, having someone who will have my back,” she said.

For her, getting married young is an advantage because she got to “learn life” with her partner. “When we’re young, we combine the little stuff that we have and that’s what we’re going to carry on as we grow older,” she said.