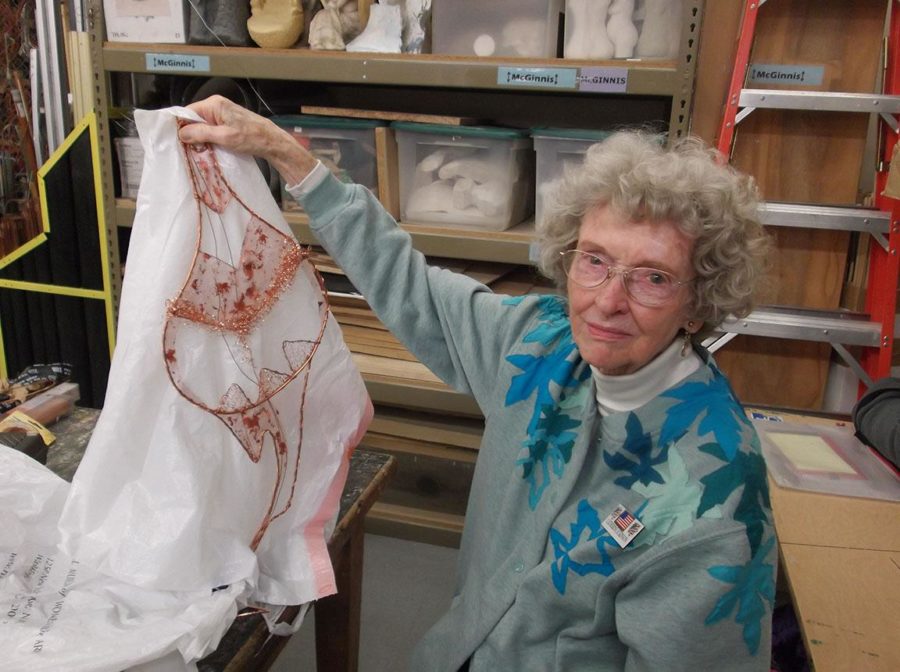 What do protozoa, copper pot scrubbers and gnarled tree roots have in common? They are all inspirations for the sculpture of 94-year-old Catherine Atkinson, a Santa Rosa Junior College student.

Two afternoons a week, she stations herself among the other advanced students in the back room of Michael McGinnis’ sculpture class in Analy Hall. In this lively space amid the hiss of a welding torch, the scream of the chop-saw and the banging of hammers, Atkinson works quietly on her delicate but somehow substantial copper pieces.

Atkinson is grace personified. She’s a lovely balance of intense focus and serene, easy exploration. Her blue eyes bright, she says she has “a perfectly wonderful time twisting little wires into trees.”

Her fertile sketchbook is alive with her intricate biological drawings. Her current work is based on protozoa. “I landed on the protozoa because they are so fascinating in their shapes. And protozoa are so linear that they can be done in wire,” she says.

She bends shiny copper wire into curvy organic forms, and then stretches “veiling or netting” across them. She paints the netting copper. Her use of netting began in her early dressmaking studies. Her continuing fabric skills – and her lifelong love of trees – are evident in the sweater she is wearing: she has cut out and carefully hand-sewn royal blue and turquoise cloth leaves onto the garment. They cascade down her back.

To the wire forms spanned by netting, she adds bunches of copper to represent protozoan “clumps of flesh.” “That’s when I grab a whole handful of my scrubber,” she says, making energized and sculptural hand gestures.

She buys copper pot scrubbers at the grocery or hardware store and unravels them. She explains the manufacturing process: tiny copper strips are “knitted into a sleeve” which is in turn formed into “a donut.” She was disappointed to discover that these scrubbers now have sponge inside, instead of copper.

Atkinson is deeply interested in processes. She is detailed and articulate about the making of things.

She started at UC Berkeley in 1939, majoring in decorative art. There, she worked on “tailoring and pattern drafting.” The model, wearing a T-shirt over her underwear, was wrapped in brown paper tape, which was then cut up the back and shellacked. That form was then given to a woodworker who fabricated a stand.

For the next three decades she was busy with her married life, raising four children and traveling with her Coast Guard officer husband.

She finally resumed her formal education in 1971 at College of Marin. There, in her art classes, she “stitched an etching.” She invented this new art form, a perfect bridge between her sewing past and her art future.

She continued her schooling at Sonoma State University, where she says she “picked up etching, because I like the permanence of the line.”

When she arrived at SRJC, Atkinson discovered yet another medium. “Knowing I liked the line, I decided to work with wire, which is very linear. I had to pick a linear subject,” she says. “One evening, I looked at my etching of protozoa on the wall. It was a good moment!”

What is she working on now? She points to a trapezoidal drawing in her sketchbook labeled “Dictyocha fibula” and holds out a curved square copper wire shape.

Her activities outside of school? “I’ve been a gardener all my life,” she says. “I have an interest in gnarled roots and twisted trunks. I have so much fun with wire trees, because you can bend the convoluted roots.” On her deck at home, she tends to 54 potted plants.

She is active on an art committee in her retirement community. She is chair of the photography hall and puts on six shows a year.

She still does some sewing, both on the machine and by hand.

Her classmate Tina Marie describes Atkinson’s curiosity and fearlessness. “She was soldering last semester,” she says.

Lab assistant Sam Cagle admires Atkinson’s effort and says she is “inspired and inspires everybody else. She just does it!”

Instructor McGinnis also praises Atkinson: “She is one of the most impressive learners I’ve ever met. She has a continuous appetite for knowledge,” he says.

What are Catherine Atkinson’s secrets for living a good long life? How does she stay so young? She answers with one word: “Enthusiasm.”