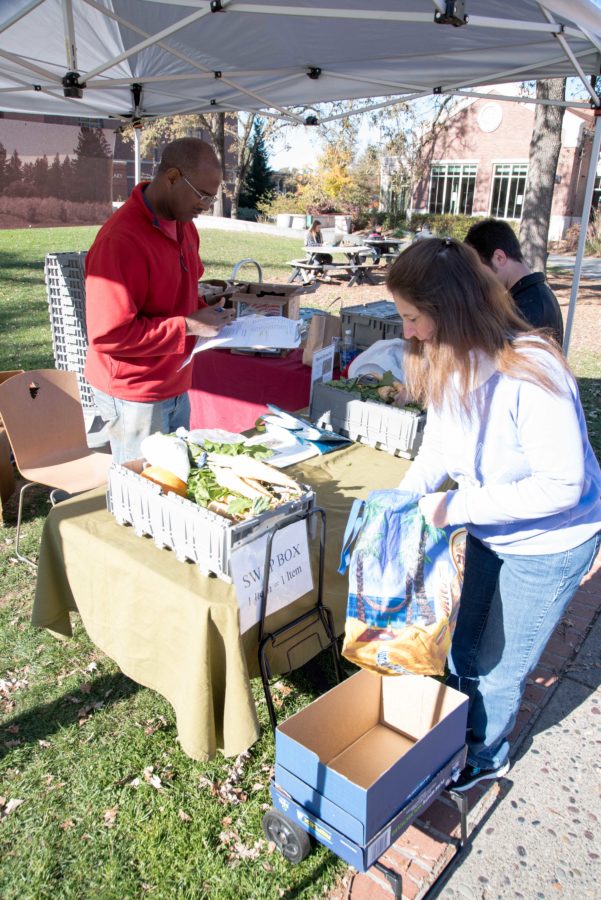 CSA members pick up food they ordered from Shone Farm every Wednesday and Thursday at Bertolini quad.

Every Wednesday and Thursday, barring holidays, a small booth can be seen on the grounds of Santa Rosa Junior College. It’s packed high with vegetables, which people stop by to pick up.

The booth is part of the student-run, community-supported agriculture program, a class at Shone Farm where students grow and sell vegetables that customers have preordered. The class is one of many Shone Farm has available for students to teach them how to work and succeed at all aspects of the agriculture industry, from growing to business.

“It’s great that we have a farm program here at the Junior College, where students can learn about agricultural careers,” said Dan Exlby, manager of IT infrastructure at SRJC and part of the CSA program.

Exlby also said he appreciates how the food is more locally grown and cheaper than other CSA programs he was involved in.

Shone Farm grew on 365 acres of land SRJC purchased in 1972, with the deal that if it was used for education purposes for 25 years, the title would pass for one dollar. Future dean of the agriculture department Steve Olson spearheaded the purchase, saying he wanted a place where agriculture students could get hands-on experience in their chosen field of study. “We had an agriculture department, but we didn’t have, you know, really any area for the students to practice what they were learning,” said current Shone Farm manager Chris Wills.

Beforehand, the site was a military listening post in World War II – or possibly the Cold War, it’s unclear.

Today, Shone Farm classes include viticulture, livestock, horseback riding, gardening and park ranging in Shone Farm’s wildlife preserves. Students grow and sell their own food and wine and learn to care for animals. The farm is working to be self-supporting, selling its own products, recycling its waste and using timber grown from its forests to build their structures.

Alan Hamilton, a sustainable agriculture major, is part of the CSA program and president of Shone Farm’s newest organization, the Tiny House Club. His club is currently working on its first tiny mobile house, so ranchers and farmers have a place they can stay on the farm. They can also potentially buy a small house to take with them when their studies are over, so that “They already have a house, so they don’t have to worry about housing,” he said. “It’s just, you know, worrying about the farming part.”

Shone Farm’s biggest problem is getting the word out. The CSA program has been cancelled on several occasions because not enough students signed up for the class it’s a part of. “When I was a student in the ‘80s, I didn’t even know we had a farm,” Wills said, and it seems things haven’t improved since then – upon bringing groups to Shone Farm, Wills finds that only about a third knew about it beforehand.

Those interested in the farm can attend the annual Fall Festival, which is every second Saturday in October. Described by Wills as the farm’s version of Day Under the Oaks, the event lets members see what Shone Farm does, and had available products made there. “It’s really a great family event,” Wills said. “And it’s really helping to spread the word about Shone Farm, and it’s a good money-maker for us too.”

There will also be a sale Dec. 12 at the farm, where they will sell many of their self-made products, including baked goods from the Tiny House Club.