Tragic loss inspires student to be his true self 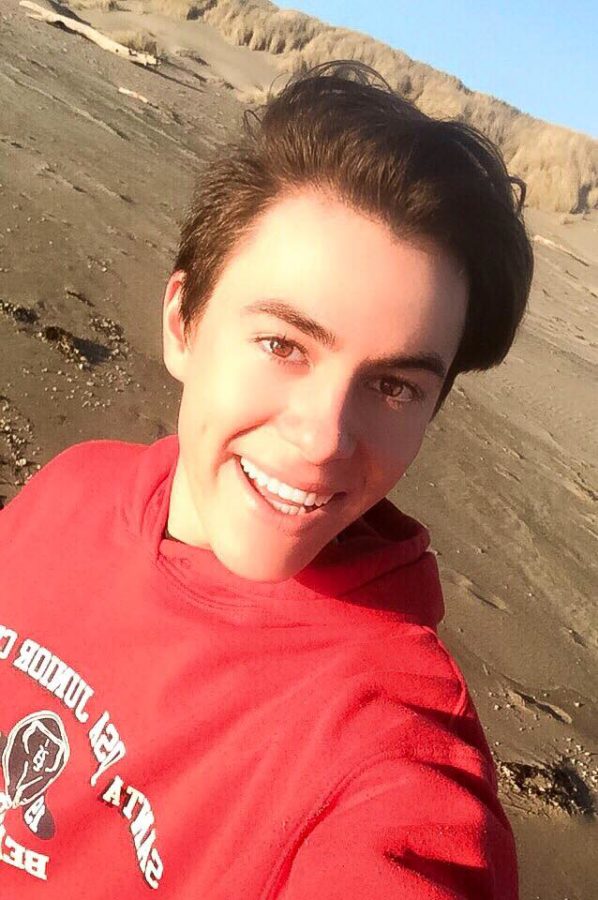 Sean Cornell’s mother’s death caused her to miss many precious stepping stones in her son’s life when she died. She wouldn’t witness her son graduate from high school, nor would she see him attend Santa Rosa Junior College or one day fulfill his dream of becoming a hotel manager. Worst of all, she would never see her son reveal his true self.

Something was different about Cornell, a 19-year-old hospitality major. For starters, there was his electric personality.

“Sean is very lively,” said Gianna Pochini, Cornell’s 17-year-old cousin and best friend. “Every emotion for him is acted out in a way that makes it easy to tell. He’s vivacious and almost always laughing and smiling.”

There’s also the fact that he is a proud homosexual. Cornell wasn’t always as open or as certain about his sexual orientation as he is today. It was only with the death of his mother that he was able to figure out who he was.

Beginning in seventh grade, he “dated” girls in a series of playful relationships.

“But when my mom died during my sophomore year, I stopped dating people. I needed time to reflect on myself and I started to come to terms with who I was,” Cornell said.

Cornell was 15 when his mother discovered she had colon cancer for the past 10 years. By the time doctors diagnosed her, the disease was well into stage four. When Cornell visited her at the hospital, his mother told him she had cancer. “I nearly passed out,” he said. “I got tunnel vision and started to feel lightheaded.”

His mother was released from the hospital and returned home for hospice care. Cornell helped care for her during her final weeks. He set up IVs for her chemotherapy, changed her liquid bag, and prepared special meals so she could digest easier. Cornell remembered how his mother would make him eat some of her food every time he brought it to her.

“She was like, ‘If I have to eat this, so do you!’” Cornell said with a slight hint of a chuckle in his voice. Cornell called it a life-changing time. “I switched from being a kid the week before to an adult,” he said.

For Cornell’s last three days with his mother, she was in a coma as cancer shut down her body. From the moment his mother was diagnosed, Cornell believed she would pull through.

“Even at that point, I didn’t think my mother was going to die,” Cornell said with pride for his mother. “I thought she was going to make a full recovery. She was the strongest person I knew. Still to this day, I haven’t met anyone stronger than her.”

Cornell described her demise as extremely tough. For four days after her death, he could not sleep. It was only when discussing the aftermath of his mother’s death did Cornell have difficulty in choosing his words. It seemed no matter what he said, Cornell could only scratch the surface of what he was feeling in the surreal wake of his mother’s passing.

“It’s hard to lose someone who was seriously your world,” Pochini said. “[Cornell] was a mama’s boy through and through. But he never stopped loving those around him and making them laugh.”

Immediately after his mother died, Cornell became withdrawn. He was less social at school and less interactive with his friends. It was during this seclusion that Cornell came to accept his sexual identity.

“It wasn’t like, ‘Oh, I have to think about my life now,’” Cornell explained. “It’s just that’s what I had the opportunity to do.”

Despite how sensitive and painful the topic was, Cornell remained steadfast when talking about his mother’s death. In fact, his smile never fully left his face as he talked about one of the most difficult times of his life.

Since it took the death of his mother for him to embrace his homosexualtiy, Cornell never managed to come out to her.

“It makes me feel pretty [bad] that I didn’t physically tell her that I was gay,” Cornell admitted. “But I’m sure that she already knew. And I know that she would be absolutely fine with the fact that I am gay.”