Community vs. four-year colleges: Realities and impressions of college life 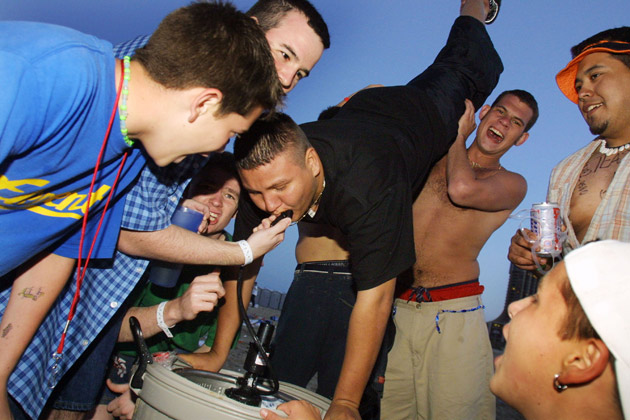 Half of the Santa Rosa Junior College interviewees said experiencing were not an important part of the college experience.

The music is so loud you can’t hear yourself think. Not that it matters because the room is a blur and the sounds aren’t arranged in chronological order. Dozens of people surround you, constantly bumping into you, and sweat is flying everywhere. You’re drunk and having the time of your life.

This is a typical college scene from nearly every movie you’ve seen. People doing the wildest things they’ll ever attempt, making life-long friends and experiencing the best four years of their lives.

But these are movies and we all know they aren’t realistic. But do people still believe this is what college is actually like?

Out of 10 Santa Rosa Junior College interviewees, most agreed the typical college experience consists of getting drunk, partying and having as much fun as they can while they’re in school.

This is the typical college experience most people want. Spending all of your money on booze, partying every night and just having the time of your life. Or is it?

A common fallacy is that most college students want this experience, but half of the 10 SRJC interviewees said the movie college experience wasn’t important to them. Careers and other forms of fun were more appealing.

He said he knows a lot of people whoprioritize the college experience, but it’s not his thing. He’s hyper-focused on his career.

“Don’t want to stay steady in one place,” Matteri said. “I want to move up the ranks.”

Fellow Bear Cub Michael Woldeslassie said, “The JC doesn’t feel like a four-year university because you’re not living on your own and most people live with their parents.”

Living on your own enables you to essentially do whatever you want, and if you live in dorms, you’re constantly surrounded by other college students in and out of class.

The only time you’re surrounded by other college students at a JC is essentially in class. Matteri said a lot of SRJC students focus on getting out and solely put their effort into that.

Psychology major Nick Wickenburg talked about the difference between the two.

“JC is a lot less money and a place to find out what you want to do,” Wickenburg said. “Not really a party school. Kinda close to home, so there’s boundaries.”

At four-year colleges he said, “[There’s a] chance to meet a ton of people, but also, four years require a lot more commitment.”

“From what I’ve heard it’s harder here than at universities,” she said. “At universities you’ll get a typical college experience, dorms and all that.”

Most interviewees believe SRJC doesn’t provide a typical college experience mainly because most people live with their parents and are familiar with the area, but nearly all believe that SRJC is a great school.

“Very impressed by it,” Wickenburg said. “They maintain a high standard of excellence.”

Community colleges are usually perceived as stepping stones to four- year universities. It’s a money-saving alternative with tuition rarely topping $1,000 a semester, while four-years have tuition costing tens of thousands of dollars, but the downside is for some people it doesn’t provide the typical college experience. For others they couldn’t care less.