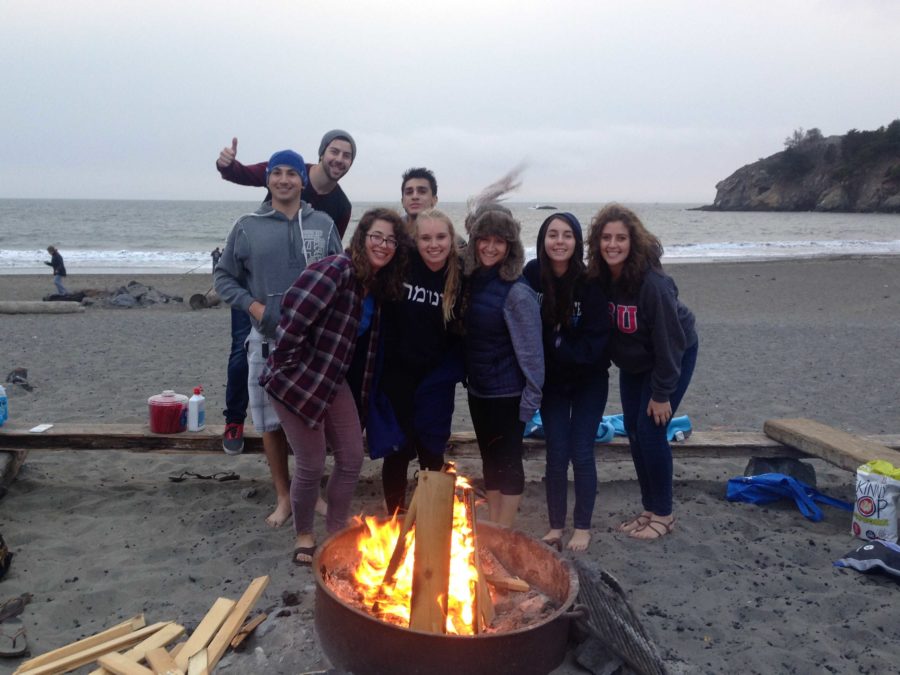 Sonoma Hillel members frequently gather for group events over the semester, including this Muir Beach bonfire.

Named after Hillel the Elder, the scholar whose teachings founded much of Modern Judaism, Hillel International establishes Jewish communities in college campuses across the globe. Reaching out to Jewish students to give them opportunities to set up connections with each other and teach skills to help blaze the future.

The Sonoma County branch started at Sonoma State University 15 years ago. While it has a strong presence on other campuses, the group hasn’t been at Santa Rosa Junior College for the past three years, since it closed down due to lack of student involvement.

Now, new members such as Director Sarah Sterne, 25, and President / Head Intern Channah Rosen, 18, have brought it back, determined Hillel will be a group where Jewish SRJC students can congregate, worship together and plan for the future.

“We’re sort of filling the void,” Sterne said. “Many campuses have Hillels, and so the founders decided there was a need for that [here].”

Sterne, originally from Los Angeles, moved to Santa Rosa with her husband so she could be part of the Jewish community here. She said she got her position as director of Hillel in Sonoma County by accident – she found the position open and signed up on a whim. It wasn’t a job she was looking for, but found it suits her. Sterne herself is not a SRJC student; but she does take the role of advisor with the intern members, including those at SRJC.

Rosen grew up in Santa Rosa and is a freshman at SRJC. In her teen years she immersed herself in the Jewish community, starting as a sophomore in high school. She was a member of the youth group at Shomrei Torah when she heard Hillel was hiring at SRJC; since Rosen was about to attend SRJC she applied for a position and the staff accepted her.

With Sterne providing advice and guidance, Rosen and seven other interns plan events and upcoming activities for the newly resurrected club. They plan for about six events a month, four of which are Shabbat dinners, traditional Jewish dinners commemorating the start of the “Day of Rest.” They are also organizing a group meeting once a month.

Right now, Hillel is focused on raising student awareness to increase their involvement in Hillel. To that end they have reached out to other cultural groups on the campus, such as the Black Student Union, which they hope to collaborate with for a shared bake sale or some other event. They also encourage current members to take two minutes at the beginning of class to talk about the group.

“People need to know who we are first, you know, so that’s our first goal,” Rosen said.

People interested in the group are welcome to attend one of the upcoming events, including a Shabbat dinner, regardless of personal beliefs.

“One thing we like to encourage is for people just to come check us out, even if you’re not Jewish,” Sterne said. “If you’re interested in what we do; we like to have an open invitation.”