Be cool and maneuver the school 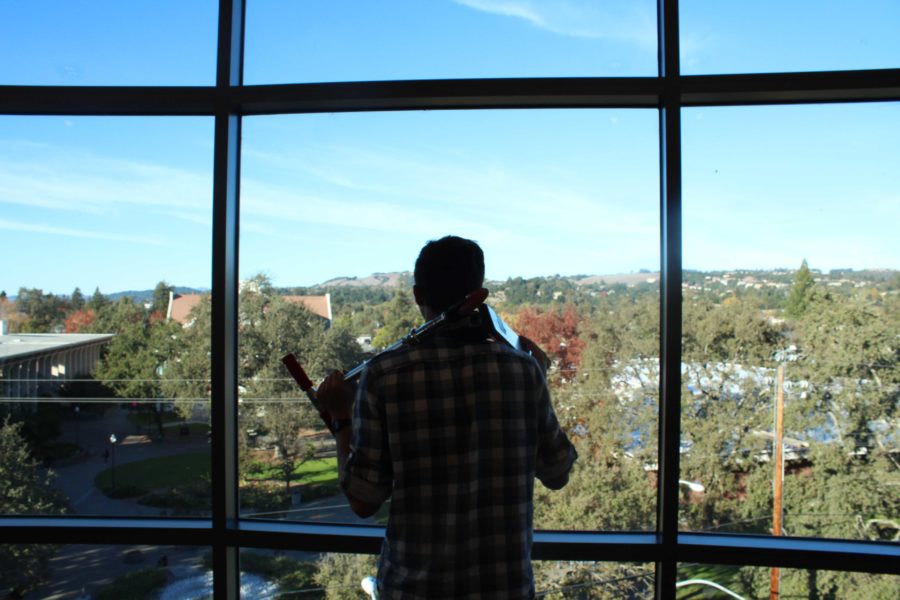 Adam Gockel coasts around SRJC campus by scooter. “It gets me places a lot faster than walking; cuts down [travel] time by over a half,” he said.

A cloud comforts you as you float blissfully with your beloved companion, Chuck Norris, through a candy-coated landscape, indulging in the sugary commodities materializing around you.

“This has to be a dream,” you think to yourself as you are suddenly startled awake. Ripped from your rapturous slumber, the sound of your alarm greets you, ferociously swearing at you to make up for all those times you opted out with snooze. How could you?

Hurrying, you rush to throw on your backpack. Hell, one strap will do; you’ll look dangerous. You quickly glance to your mirror. Cow-lick is coming back in style, right? Zig and zag, swerve to a skerch, you somehow make it to school safely. Now for the real challenge; showing up to class on time.

These moments prove crucial, as you must ungracefully make a fool of yourself by galloping like an immunity deficient gazelle to your first class. Nerd.

Wouldn’t a transportable set of wheels prove most beneficial? As more and more students walk the campus grounds, making their way from points A to B, many resourceful Santa Rosa Junior College students have turned to bicycles, scooters and skateboards to make their daily journey a bit less hectic.

“It gets me places a lot faster than walking; cuts down [travel] time by over a half,” said SRJC student Adam Gockel.

Gockel prefers the scooter over other modes of transport due to its easy maneuverability. He first heard about the idea from his brother and has since noticed a significant difference in arrival time only just having picked up his two-wheeled vessel last semester.

Swearing by his beloved scooter, Gockel only noticed one setback to his already dangerous, scooter-riding lifestyle with the oncoming progression of the season.

“When it’s wet, it gets really hard to scooter. Almost every time I have scootered in the rain I have fallen,” Gockel said.

With the coming condensation and wetness, Gockel finds no excuse to stop himself from riding wherever he pleases. Mastering his mildly mischievous scooter, compacted and wielded in hand, Gockel stands by his “glide-or-die” lifestyle, saying, “They never stop for a man on a scooter.”

For those perhaps unwilling to make the shift towards scooting and its glory, more traditional modes of transport may prove suitable.

“I’ve bicycled as a child and have since never stopped,” said Jeff Witherton, an SRJC student. “Not only do I ride on campus, but off as well; I never really stop. Except for class of course.”

Witherton found the bicycle to be his preferred mode of transport due to the optimal amount of perks.

“What can I say? It’s not only the fastest, but perhaps the most accepted form of on-campus transportation,” Witherton said.

Upon making this majestic discovery, Witherton doesn’t take a sick day from bicycling on campus as he systematically creates the playground to which he rolls on.

The only downside, if any, Witherton explains, is you have to actively take time out of your day to find a proper spot to tie down your metallic steed.

“Once secured though,” Witherton said, “I feel better about having to leave my bike outside of class, knowing I’ll be right back for it.”

If it’s portability you desire but hate the restrictiveness that comes with having handlebars, then maybe the skateboard is your match.

For Malcolm Jeeves, making that decision was as easy as selecting Charmander as a starter in a good game of Pokemon.

“It’s just fun for me,” Jeeves said. “I like to think that the people are just obstacles and it’s my goal to move around them.”

Jeeves has actively skated since he was four when his father bought him his first penny board. He can still recall fall mornings when he would have to skate to elementary school.

“Since then, I never even thought about stopping. Plus it just saves so much more money not having to drive,” Jeeves said.

Self-defined as “the most dopest skater of all time,” Jeeves considers himself gifted in having taught himself how to pop his skateboard up and thus move it, with his body, over objects; otherwise known as the “Ollie.”

With this trick up his sleeve, Jeeves takes the already utilizable world around him and manipulates it to the extreme, projecting himself over the shorter of obstacles.

Though all different in terms of mobility, one factor remained a constant: none of these fellows ever found themselves late to class.

So whether it’s scootering, bicycling or skateboarding that tickles your fancy, find what you like and stick with it. If you make it a part of your day to relax and ride to class with ease, opposed to running and exhausting yourself before your class even starts, you’ll be able to spend more time on a cloud, floating blissfully through a candy landscape with your beloved companion, Chuck Norris.