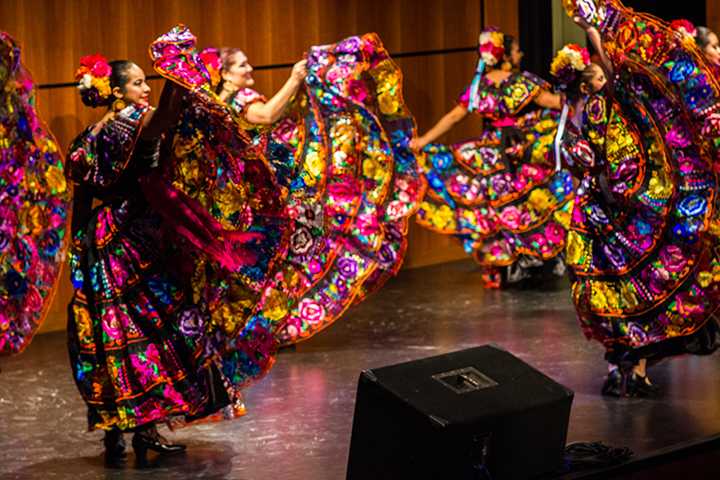 Lumafest came to life as a colorful celebration, which for many, stirred the unquenchable thirst of curiosity. Students, faculty and the surrounding community ventured to the grounds of Santa Rosa Junior College’s Petaluma campus Oct. 17 to engage in the  festivities and education booths.

The merriments of the day officially began at 11 a.m., lasting until 4 p.m., with an assortment of dance performances, workshops, tours, lectures and music.

Dances and music of different cultures graced the Rotary Plaza intermittently throughout the day. The dance crew Danza Azteca Xantotl kicked off the fair with its Aztec dance performance honoring the past and present.

Drummers and dancers of the group Windsor Bloco drew in a large crowd, performing their music and dance traditions of Afro-Caribbean Americas at noon on the plaza.

Windsor Bloco dancers Jacqueline Gaspar and Delilah Mendez, who have been with the group for over two years, said they would recommend people joining the group or watching the shows, which they have a lot of fun performing.

Gaspar said she decided to join the group after watching her sister participate. “Just by looking at her performing and having so much fun up there, that motivated me to want to join the group.”

Juan Gonzalez has been directing and dancing in Ballet Folklórico Paquiyollotzin for three years. “I’m double excited because I’m the teacher and I’m the dancer, too,” he said. “It makes me feel nervous a little bit, but this is part of it.”

Gonzalez said the dances represent traditions from different cultures and countries. “Every country has folklore,” he said. “It means something emotional. People can see it for the first time.”

Spectator Juan Solorio said he thinks the ballet group goes the extra mile in terms of originality. “I think they bring something different opposed to the traditional folklore dancing that other [ballet groups] usually do,” he said. “They’re more joyful…and they seem like they enjoy it more.”

“There’s this idea of being creative but adding your culture in it,” Briano said. “I’m not in competition with anybody. Very few people make the things that I make. I like to be unique that way.”

Her unique crafts include matchboxes, magnets, jewelry, purses, cards and Dia de los Muertos dolls, all of which were on sale at her colorful booth. The theme of Día de los Muertos pervaded the campus and festival attendees.

“I was happy and proud to celebrate my culture and its beautiful tradition,” said SRJC student Joshua Cortez, 23. “I remember very happily as a child painting the faces of the skeletons with my brothers.”

The festivities and celebration of Dia de los Muertos are a gateway to a deeper meaning. Those who honor the tradition do so by remembering their dead.

SRJC student Samantha Bien, 22, said she loves the celebration and respects the sentiments involved. “I lost my brother two years ago to a car accident, and I just wished there was a more deserving ceremony for him then,” she said.

“Everybody loses somebody they love; they need to be remembered because they were important to somebody,” Cortez said.

Venturing beyond the thrilling performances and exhibits by the Student Center and Rotary Plaza, one could meander through the large Green Area to learn about all things health, conservation and nature related.

California Native Plant Society  drew in nature lovers with plants, books and a plethora of information.

Virginia Steenhoven and Kerry Winniger have been a part of the California Native Plant Society for 10 and three years respectively.

Steenhoven said SRJC has native plants scattered throughout its campuses, which more people are taking note of on the Petaluma campus.

“I never knew there was another beautiful campus in Petaluma. I definitely will start taking classes here next year,” Cortez said.

Dr. Bruce Elliot currently teaches Renaissance: The Great Awakening on the Santa Rosa campus. He roamed around Lumafest dressed as a nobleman from the court of King Charles II in 1700s Restoration England.

In addition to Elliot’s unique dress, many other crafty individuals gallivanted the campus grounds in vibrant attire and traditional garb. Interactive information booths sprinkled the foundation, encouraging all walks of life to participate in the fun.

If you were unable to make it to this year’s mélange of wonder, remember Lumafest will return next fall.