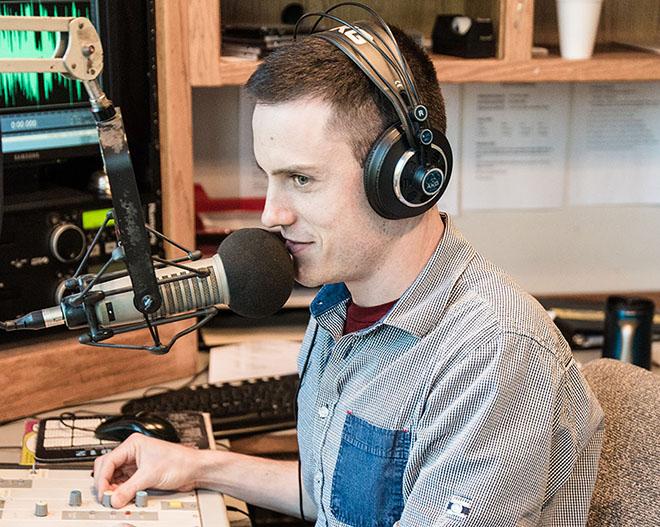 Radio Dano also has a passion for sports, specifically hockey, and co-hosts a sports broadcast at 4 p.m. Saturdays on KSRO 1350.

Daniel Weir stood in the hall of Burbank Auditorium in 2003 staring at a note on the door which said administration canceled the radio class he was taking at Santa Rosa Junior College.

“I was thinking, ‘Well, there goes my chance in radio,’” Weir said.

Today, although no one might know who Daniel Weir is, the name Radio Dano might ring a bell among local country music listeners.  Dano hosts the weekday afternoon show from 3-7 p.m. on Sonoma County’s radio station Froggy 92.9.

He had a childhood friend, also named Daniel, who nicknamed him Dano, a name that stuck. During his junior year at Casa Grande, he helped start the school newspaper, setting a good foundation for his job now.

“I have the most value here because what radio really can hone is local; talking about things that are happening. Having stories about Sonoma County. I have a ton of those,” Dano said. “If I picked up and went to Oklahoma, I don’t have any stories there. I don’t know anything about it. If I went there, no one cares. I can’t say I played Petaluma Valley Little League there and it matters; it doesn’t.”

He first attended SRJC in summer 2001 to take an art class while still in high school. After graduating from high school, he was a Chemistry major at California Polytechnic State University in San Luis Obispo for a year before figuring out it wasn’t what he wanted to do.

He returned to SRJC in fall 2003, taking general education classes until he found an interest in a radio class before the department canceled it. He then transferred to San Francisco State University as a radio and television major, with an interest in audio production.

One night he was in his room listening to Lovelive on the radio with Adam Carolla when a lightbulb went off in his head.

“I think I want to do that [host a radio]. I do that all the time with my friends, joking around,” Dano said.

He switched his major emphasis to radio and completed classes needed for his degree at SRJC in 2008. During that time he took two acting classes, one with instructor Reed Martin in fall 2007, who influences him even today.

“I’m so proud of what he’s doing. It’s heartwarming to hear what [alumni] are doing now,” Martin said. “I remember he was very focused, hard-working and diligent.”

These classes helped Dano in his job today, as they cured him of stage fright. Martin also teaches warm-up stretches and exercises Dano does before each show.

“What I love about the JC is they reach out into the community. You get people who are like ‘This is my passion; this is what I want to do. I don’t care if I can’t do it full time, I want to be here,’” Dano said. “The JC people embrace people like that. I have been a big fan of the classes I’ve taken there.”

When his internship ended, program director Danny Wright wanted to keep him around, so he asked him to be the back-up traffic reporter. A month into training, the main traffic reporter quit and within an hour Dano received a phone call from Wright offering him the position.

“That was really a make-or-break moment for me. Someone asking you ‘do you want to get up at 5:30 in the morning everyday?’ The answer to that is no, but do you really want to do radio? Yes, so you do it,” Dano said.

From there he started doing weekend shows on Mix 104.9, which turned into weekly night shows. He got to know Rob and Joss, who prefer to only go by their first names, from the “Rob & Joss in the Morning” show on Froggy 92.9.

In spring 2008, a spot opened for an afternoon show on Froggy and Rob offered it to Dano. Both Rob and Joss agreed he had potential when they met him.

“Dano is incredible to work with.  He has wonderful instinct, a million ideas and he’s great on the air.  He is one of those dream people you’d like working at your station,” Rob and Joss said in an email interview. “His work ethic is the kind you’d like everyone to have. Passion. Desire. A need to see that things get done correctly.”

To be successful in radio, Dano says it’s important to not just do your job, but also be a person “with your heart switched on.” If no one likes an intern they won’t be asked to stay afterwards. He described interning as different than a video game where you go through a checklist and move on to the next level, but it encompasses what you do and who you are as a person.

“He isn’t leading with his ego. Some people have really big egos and they’re big jerks about it. Dano is a good guy,” said Stacy “Splash” Hoblitzell, a Froggy radio host. “He came in with the same ego in his 20’s and moved up quickly.”

Once he moved into his afternoon show, he admitted having no interest in country and no clue what he was doing. “I just didn’t get it,” Dano said.

Eventually he came to love country and the way it positively brings a community together. While pop music is usually written about the singer’s personal life, country is about the community, he said.

“The cool thing about country music is its music is totally and completely designed for the listener. It’s a product that’s tailored to you personally,” Dano said. “It’s like an audio gift giving. Everything’s really positive. It’s a whole genre that’s a very positive, cool thing. Now I’m like not only do I get it, this is the best thing ever.”

His favorite part of the job is the listeners, whom he prefers to meet over celebrities. When he is in the studio, he is alone and doesn’t feel like he knows who’s listening, but getting out to meet people makes him see who he is talking to on air.

“You know the people who listen to Froggy work so hard and they just want to turn on Froggy. The fact that you can do that for such a quality person means a lot,” Dano said. “All the listeners I’ve met have very open hearts. Very real people, like they want to be friends with you.”

He always tries to make a connection while on air and be current. Genuinely seeming like someone’s best friend on air is a good way to make this connection, a theory called you-positioning. Broadcasting is versatile because the four hours on air aren’t the only part of the job.

“That is a misconception though, that it’s not work. It is work. People are like, ‘Oh it must be awesome to only work four hours a day.’ It’s eight hours a day; It’s a full on job,” Dano said. “You actually have to do like four jobs in radio, not just one.”

After a four-hour show, the total airtime of him actually talking is usually only six minutes. Radio is constantly moving, leaving only 15-30 seconds in between songs to talk.

It’s not hard to get into radio, Dano said. A “radio voice” isn’t always something someone is born with, but develops over time. In the beginning, he said vocal cords can be weak and strained because of stress, but can develop over time, as  his did.

“He’s one of the guys who was really meant to be in radio. He just got it. Some of us took longer,” Splash said.

Dano now lives in Petaluma with his wife and 14-month-old son. He loves his job and has no desire to move to another company or onto television.

“If you want to have a long career in TV, you have to start doing weird things to your face. I don’t want to feel like ‘Man I really need to have this plastic surgery procedure so I can continue to make my living,’” Dano said. “In radio, you can be as ugly as you want, and you’re all good.”