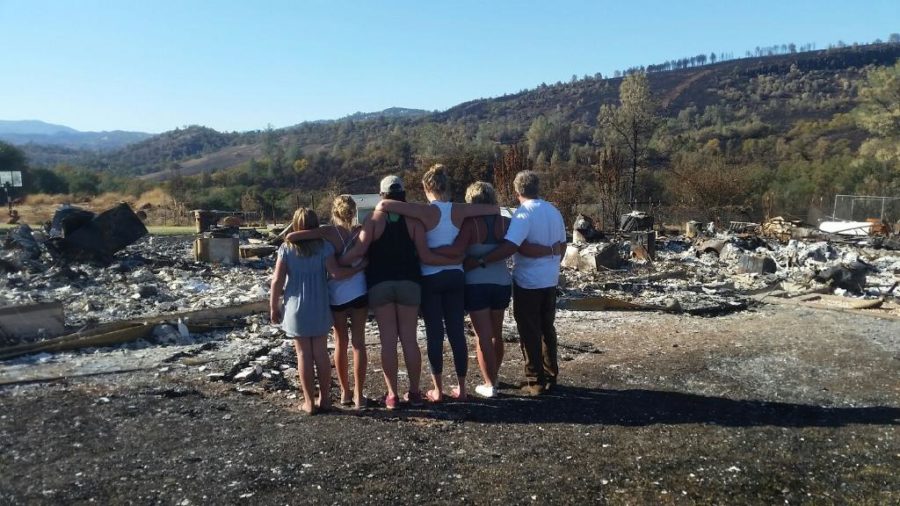 SRJC student and basketball player Ashley Hart and her family stand in front of the remains of their burned house.

Her heart raced and her breaths cut short as she heard her sister’s screams over the phone: “Fire, fire!” Ashley Hart panicked. The Valley Fire drew closer to her family home, and she was 124 miles away.

“I’ve been living there my whole life. All my memories are there. Everything,” Hart said.

She is one of many Santa Rosa Junior College students the 76,000-acre Valley Fire impacted when it swept through southern Lake County and destroyed more than 1000 structures.

After graduating from Middletown High School in 2014, Hart moved into her aunt’s Santa Rosa house last fall and enrolled at SRJC, majoring in kinesiology for athletic training.

She was attending her first football game as an athletic trainer when she first received news of the fire.

“We’re down in Butte,” Hart said. “I get this phone call from one of my closest friends who was like ‘Yeah, my house burned down. Everything is gone.’”

Assured that her own family house in Lake County was safe from the fire, Hart offered her friend their home.

“I’m like ‘Hey if you need anywhere to stay, you can come to my house,’” Hart said. She then called her mom. She called once, twice, 20 times. Finally her mom answered.

“I can’t talk right now,” her mother said. That’s when she heard her sister’s screams.

With half a state separating Hart from her family in Hidden Valley Lake, she began to unravel.

“I tell my athletic trainer ‘I need to go home. We need to get me home as soon as we can.’”

Hart bolted to her aunt’s house in Santa Rosa where she met her older sister. Unable to go over Mount St. Helena, she called her mother again.

“She’s like, ‘We’re on our way out. We’re driving through flames to evacuate. I only had three minutes. I grabbed as much as I could,’” Hart said.

Hart’s family also owned a family property in Willits and headed there, while Hart and her older sister spent the night in Santa Rosa.

“The next morning, we wake up together and my mom calls us,” Hart said. “She’s like ‘Everyone, deep breath. Here we go. Our house burned down. Everything’s gone. We’re in Willits. We need to be a family.’”

Ashley and her sister packed their clothing, got in the car and drove there.

With nearly 400 SRJC students residing in Lake County, according to enrollment records, many other students like Hart experienced the devastation of the Sept. 12 Valley Fire.

SRJC student Jerry Espinoza was cashiering at a local grocery store in Middletown when the fire ignited.

“People started coming down from Cobb Mountain crying because their houses were on fire and they were homeless,” Espinoza said. “People were bawling out and in tears, and at that time they hadn’t really told Middletown or Hidden Valley that the fire was really that strong. They had to shut down the store because the flames were too close to the town.”

Espinoza wasn’t able to get to his Middletown apartment due to road closure. “It was days until I knew how the house was, or if there was even such a house.”

Bracisco was at her house in Santa Rosa when she woke up to a text from her sister, saying they had to evacuate.

“I grew up in Lake County for the most part,” Bracisco said. “I’ve known that house since I could remember, since I was a baby.”

Espinoza, Bracisco and Hart experienced the fire in different ways, yet their fate was the same. Espinoza’s apartment burned down. Brascisco’s family home turned to ash. And the inferno scorched Hart’s property. Only memories remain.

On Sept. 21, Hart and her family were able to see what was left of their home.

“Me and my sister were walking on, holding each other’s hands and we just dropped to the ground,” Hart said. “We couldn’t see anything. All my photo albums, all my medals from sports, all my jerseys that I got, all my clothing, all that’s gone.”

Hart was overcome with all the support from SRJC and her community.

“Some friends I haven’t talked to in years are reaching out to me and it’s just so overwhelming. I’ve rekindled so many friendships. It’s insane,” Hart said. “And my coach, Lacy Campell, is being above and beyond. She’s like a second mom to me right now. Anything I need, she’s there, a phone call away.”

Since firefighters contained 95 percent of the fire and authorities lifted evacuation orders, SRJC students are picking up the pieces of their homes and lives.

“It’s so depressing to go back home and be with my family. I just want to try to get past this fire thing as soon as I can,” Hart said. “But we’re all trying to stay as positive as we can ‘cause we’re not going to let it tear us down.”