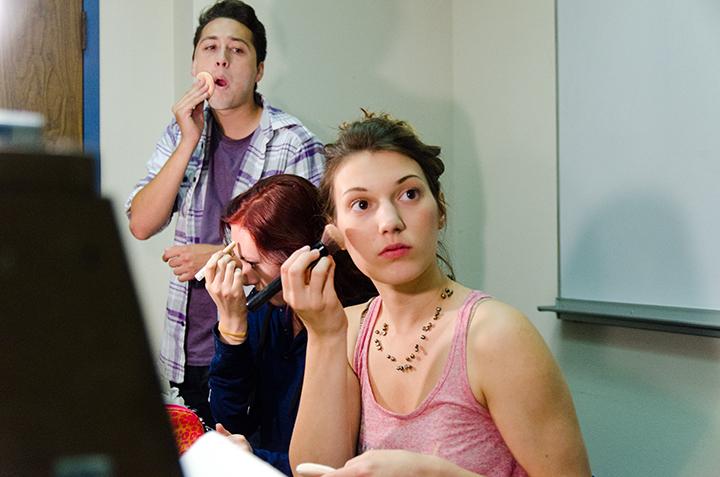 Actors Danny Medina, Christine Vondralee and Peyton Victoria apply makeup before rehearsal on Sept 22 in a backroom of Newman Auditorium.

Dealing with life and love is complicated enough; recreating it on stage is a whole other feat.

Santa Rosa Junior College’s rehearsals for the first fall theater production, “Almost Maine,” had a brief rehearsal window. The cast assumed their characters at the end of August and spent the entirety of September perfecting scenes, costumes and set designs.

“Rehearsals are important. In the beginning stages it was a lot of just don’t worry about saying the lines, it was more about try and relate with the character and who they are and where they are coming from,” Jacinto said. “I feel like with a lot of those rehearsals a bunch of characters got tapped into.”

Jacinto hopes students can relate their lives to the play. The entire show goes through couples dealing with their own stages of love, being out of love, falling in love and realizing maybe they should be apart. She said there is at least one scene in the show everyone can relate to and take personally their own life experience.

“Almost Maine” is a widely performed play. A North Carolina high school banned it due to a same-sex scene, but SRJC theater decided to leave the scene in. Theater student Danny J. Banales, 19, plays the role of Chad, a country guy who falls in love with another character, Randy.

“I think something has been lost in pop culture today and that’s love for humanity. Love for another individual, not necessarily focusing on sexual orientation or what they identify as,” Banales said. “I play a character who falls in love with a man and it really opened my eyes to how lost folks are these days, and how judgmental they can be.”

During rehearsal Banales said he connected with his character and learned new things about himself. He and his scene partner built more confidence together.

SRJC theater student Miranda Jane Williams, 19, thinks SRJC theater is a good place to challenge yourself and create new experiences with a group of people who are motivated to get quality theater done. “There is no such thing as mediocre theater here at SRJC. We really go full out,” Williams said.

She said rehearsals are the most important part. “The scene itself is pretty personal for me. So a lot of the rehearsal space is just me getting things out and exploring with what my limits are. We have worked a lot, so it better be going well,” Williams said.

Shillington said SRJC theater is about creating a community and seeing the students bond together. He created a space in rehearsals where students feel they can take risks and are safe to be truthful.

Shillington paused and took a moment to ground himself before expressing what he hopes the audiences take from “Almost Maine.”