An a-maze-ing place: getting lost on SRJC campus 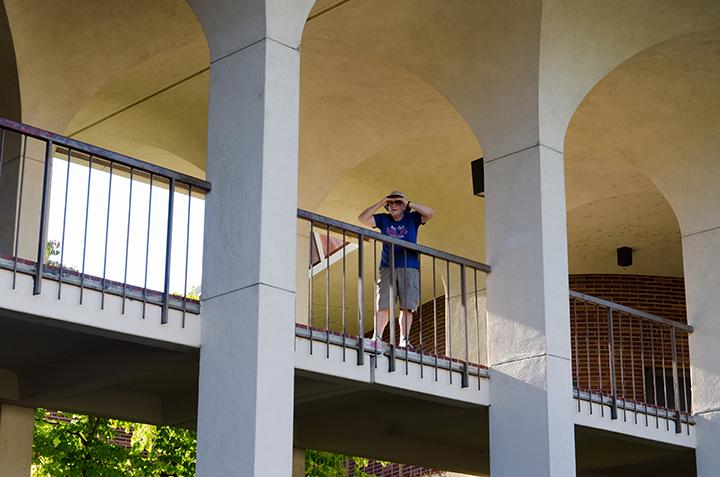 Writer Rita Losch examines the convolution of the Santa Rosa Junior College campus from above.

You’ve heard of college orientation. What about college disorientation?

It’s easy to get lost on the Santa Rosa Junior College campus. Classically beautiful, it is also serpentine, byzantine, elusive and downright baffling, particularly on your virgin visit.

Do not be surprised if you continue to get turned around, over and over. You can get lost every single time, week after week, even in the final week of the semester. The wrong route can be different each time. Or, the wrong route can be identical each time, imprinting the mistake more and more deeply on the hapless late student’s harried mind.

Here are some student reactions to the curvy enigmatic layout of the campus.

“I’ve gone to the SRJC for three consecutive years and every semester I still get lost. If you ever end up in Lark Hall in the Life Sciences Department, whatever you do, don’t follow the wall: it will lead you in circles,” said student Nora Milton.

Victoria Rose of the SRJC Anime Club said, “My first semester, I had to carry a map with me wherever I went.” Her fellow student and Anime fan Richard Rose says, “The map is still disorienting since the maps are not always relative to your position.”

“My first year at the JC I took my first class in the biology and life sciences building, the odd shaped one, that has a round central building and three spokes off of it,” SRJC student Ashleigh Hess says. “Every time I went to find the bathroom, which was on another spoke of the thing, I would circle the hub building several times before I found it.”

Campus experience does not necessarily lead to enlightenment or even familiarity.

“This still happens to me, “Hess said. “The campus is huge and sprawling and separated by parking lots and gardens, there are paths that lead to locked doors, and when the foliage changes with the seasons you lose your markers.”

Perfectly intelligent people can find themselves standing between Baker and Lark, scratching their heads and feeling panicked, ashamed and stupid about once again misplacing the disappearing Bussman Hall. The student, otherwise prepared, is now entirely farblondzshet, which is Yiddish for “bewildered.”

“Our way-finding on campus needs to improve. We will be developing a new signage plan as part of the Facilities Master Plan,” said SRJC President Dr. Frank Chong.

The college experience is fundamentally about the “where” of who-what-when-where-why-and-how. Stroll along the winding pathways with a pile of books cradled in your arm or heavy in your backpack. Or recline with Sophocles under a majestic Quercus Suber oak. But, you will have trouble finding the proverbial ivy-covered hallowed halls and the idyllic ivory towers.

Signs are everywhere, but the signage is confusing and inadequate. “You are here,” it insists. But, where is here? And, how do you get from here to there? The distance between two points should be a straight line, but the campus has no straight lines.

Who cares that the library is the second largest facility on campus at 145,000 square feet, housing nearly 130,000 printed books and that the website says it “incorporates a white noise generator that block [sic] ambient sounds,” if you cannot find the restroom or the drinking fountain?

Then there are the building codes. Say you have miraculously figured out, by bumbling around, that 2803 means Maggini Hall, Building 28, Room 3. Just wait until you realize that Maggini’s ground floor is 27, its second floor is 28, and its third floor is 29. Nobody has explained this to you. It’s enough to make you scream.

Why does journalism meet in a science lab, complete with individual sinks? Perhaps it is the closest location to The Oak Leaf campus newspaper’s bungalow — called a “hut” on the 1950s mimeographed archival map you came upon — in Analy Village. But why is Analy Hall so far afield from Analy Village? And how do you pronounce “Analy” anyway?

And, is Charles D. Belden, the College’s first Dean of Occupational Education from 1965 to 1981, for whom the Belden Center at SRJC’s Shone Farm was named, related to journalism instructor Anne Belden? Will mysteries and coincidences never cease?

The 1996 Call Center is not for placing telephone calls or practicing your ornithological birdcalls: it houses the Child Development Department and the Children’s Center. Why? Because it is named for Robert Call, Trustee during the early 1970s. Who knew?

Why is this campus so difficult to navigate? Seeking control over chaos, you beg for a campus tour from one of the student Ambassadors. Alas, your request seems to be denied: tours are only for new faculty and staff, and prospective students. You are already a student. A lost student.

In the Library, the academic temple where all answers dwell, a reference librarian just happens to mention Amy Malaise, SRJC Library Technician in the Archives. You make a beeline to secure an appointment to peruse the College’s historical materials with her. Deep in the back rooms of the library: paydirt! Finally, you get a reality check.

“The Santa Rosa campus can be so perplexing because it has done a lot of growing in the last 85 years. Since the original acquisition of Burbank Park in 1930, the campus has gone through several ‘building spurts’ as the College has acquired new land through purchases made possible by various bonds and other money sources,” Malaise says.

The same architects built clumps of buildings in the same era, which explains why one building is often the mirror image of another in this verdant hall of mirrors. But, which curved archway belongs to which edifice?

To exacerbate the confusion, Shuhaw Hall, Doyle Student Center, Barnett Hall and Bailey Hall, each designed in the 1950s and ‘60s by Clarence Feliciano, are also similar but different nonetheless.

You are tricked by the illusion and the hope of a meaningful pattern, when in fact the school layout is rather willy-nilly and scattershot.

“Since the campus is spread out and is now even separated by major streets, it doesn’t have an overall unified feel,” Malaise says. “There is no real central area around which the buildings are clustered, with the exception of the open space between Pioneer, Bertolini, and Doyle Library. There also isn’t a major focal point to help orient visitors, such as a bell tower or other tall structure. This can make the campus sometimes feel difficult to navigate.”

SRJC Past President Brook Tauzer’s Historical Report lists campus landmarks like: the Engineering Stones which name retired Engineering faculty; the Legion Gate, dedicated to Luther Burbank by Theodore Roosevelt in 1935; the Art Gallery Dogs, two identical male Great Pyrenees; the Carillon, a 1971 gift from businessman Hymmie Jacobs and Joe’s Rock, in memory of Joe Smythe, a mathematician at SRJC from 1965 to 1982 who was killed in an automobile accident. It bears the inscription “Unauthorized Personnel Only.” Even these quirky and cute landmarks might not help you find your way.

Floyd P. Bailey, SRJC President from 1934-57, in his “History,” said he was “locating the buildings, began to plan the layout of the school, walking up and down the forty acres, stopping and turning and pacing off walkways and buildings, athletic fields and roads.” Anecdotally — according to Malaise — Dr. Bailey carefully observed the patterns of students criss-crossing the campus, before having pathways and sidewalks laid out.

In spite of these intuitive, organic beginnings, there is no scheme to make sense of what is where on the SRJC campus.

So, dear lost student, to leave you with some advice to the campus-lorn:

Always carry a campus map. A compass wouldn’t hurt, either. And, notice where the sun is rising or setting.

Memorize and make friends with landmarks, such as the two-dog museum or your favorite bench or trashcan.

Use whatever mnemonic devices you can find or invent.

If asking for help or directions, approach an older person, probably a teacher, maintenance person or gardener, who is wearing long pants and not carrying a skateboard, and who looks like she knows where she is going and how to get there.

Do not ask students for directions. Sadly, most students you ask will not have a clue. “The student center? I didn’t know there was a student center,” or “I just use my phone’s GPS; it even gets me to the room number,” wrongly presuming everybody has a smartphone.

Try not to pathologize your absolutely nonexistent sense of direction.

Give yourself permission to get lost. Try to enjoy the adventure of getting lost.

Blame the designers of the campus.

Blame the campus itself for its impossibly cryptic, arcane configuration.
Love the campus, in spite of itself and yourself.