Good vibrations provide a rush of adventure from A to B 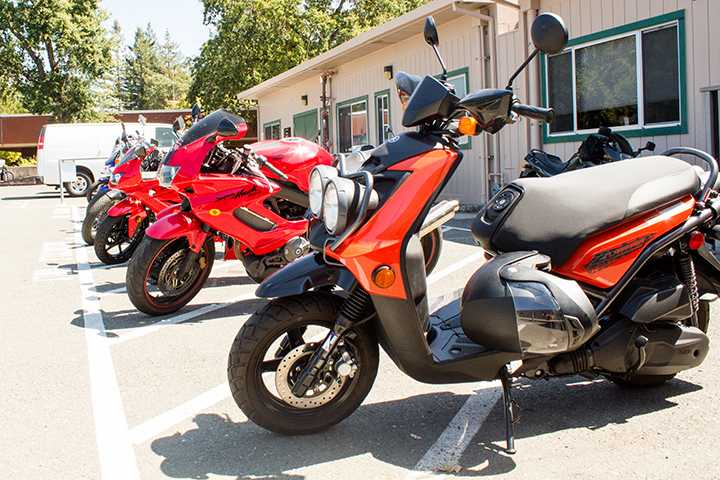 Students who ride motorcycles have designated parking spots on campus where parking is readily available.

Enticement all over, you pull the throttle in harder, knowingly feeding your unquenchable urge.

Looking ahead, the path falls clear before you; to your side, a cosmic blur of visual intangibleness. The vibrational fury that is your seat cushion boisterously purrs along through the wind that so indignantly engulfs your body and you come to the subtle realization: motorcycling is something much more than transportation.

Riding on the back of this modernized steed, the operator has the freedom of becoming part of their environment, as opposed to naively navigating through it. The author of the classic 1974 book “Zen and the Art of Motorcycle Maintenance” Robert M. Pirsig stated it best, “In a car you’re always in a compartment, and because you’re used to it. . . you’re a passive observer and it is all moving by you boringly in a frame. On a cycle the frame is gone. . . you become in complete contact with it all.”

Initiation into an interest such as motorcycling isn’t necessarily seized overnight. For Santa Rosa Junior College student Brian Meyer it was one that started when he was much younger.

“Since [I was] a child, I’ve always been interested in motorcycling as a recreational activity. It’s just nice to be out and more involved in the environment,” he said.

For many, the aspiration to ride comes from a various set of causes.

Some people motorcycle directly because their parents did, some strictly ride for the economical advantages that come with riding and others only ride for the sex appeal that comes with owning a bike.

An SRJC student who wished to be named under the alias, “Danger Dude,” attests to the dangerous sex appeal aspect.

“Man, I only ride for the ladies, man. . . when I put on my leather jacket and my leather boots and cruise down the street, I definitely see them catching eyes man,” he said.

This more than eccentric, egotistical-leaning view towards motorcycling isn’t unjustifiable. For many who seek the thrill that comes with danger, or even appearing dangerous, they too might find a rapturous release through cruising down the street and catching the gaze of the voluptuous and the majestic.

On the opposite side of the spectrum, a more pragmatic reason for motorcycling is presented through the perks that come with this bi-wheel transport.

Motorcycles and cars differ in a range of monetarily beneficial aspects. The gas tank of the motorcycle, though smaller in size, requires the use of more constant, cheaper fuel. This means that though gas is purchased more frequently, it is only needed when the cyclist knows they will be operating the bike and for a price hardly ever ranging into the double digits.

It doesn’t end at gas prices either.

“I started really getting into motorcycling ever since I found out that the parking pass was cheaper,” said SRJC student Michael Morley. The motorcycle parking pass cost $10 opposed to the car parking pass, which costs $60.

“The parking here is so nice,” said SRJC student Andrew Ferguson. “At my old school, they didn’t even have designated motorcycle parking, so this was a great surprise.”

Parking becomes a task deemed less stressful, especially for the SRJC cyclist who gains the option of parking in a car parking spot or the designated motorcycle parking spots provided on campus.

The passion for motorcycling may or may not arise for many of those who seek its transportation, considering it simply a tool of getting from point A to point B.

However, those who do hold it in high regard hold it so radiantly and endlessly as they choose to cruise down the street or race like a bat out of hell. Eventually the subtle realization will be made: motorcycling is something much more than transportation.