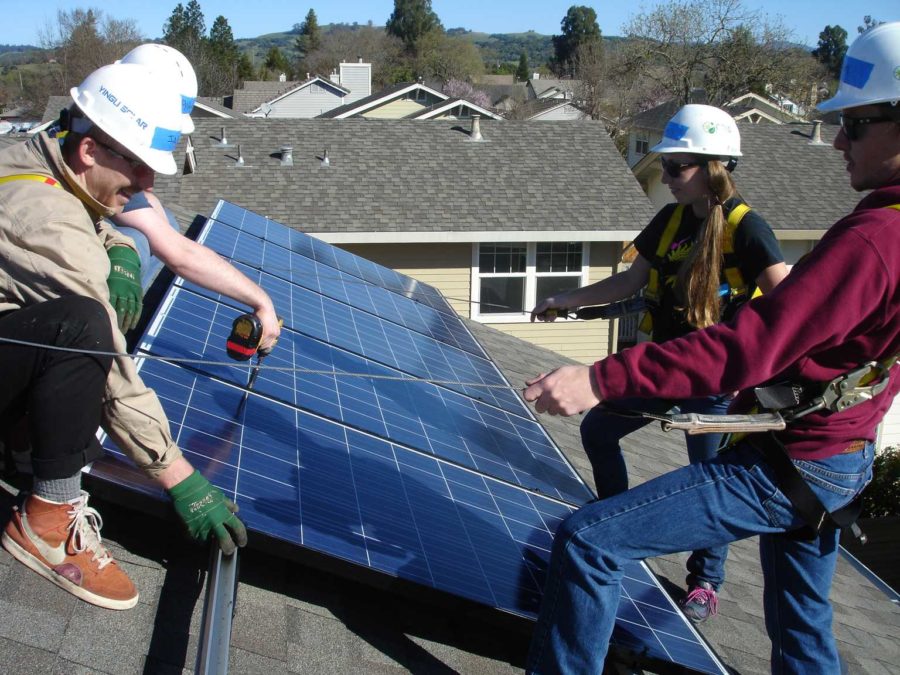 Students checking one of the solar panels on the roof of an SRJC building.

Gizmos, gadgets, conductors, circuit boards, and a flux capacitor for all is known are bolted against the interior walls of Professor Byrne’s SRJC’s Solar PV bungalow at its Southwest Center location off of South Wright Road, Santa Rosa.

Kevin Byrne, former Marine, licensed electrician, SRJC graduate, OSHA certifier, bicyclist activist, and SRJC’s professor of Solar PV installation and certification, has been the instructor at this location for the past seven years. In fact, Byrne not only played an essential role in the creation of the solar PV certificate program, but he is the only solar PV instructor here at the SRJC.

Byrne has been a part-time professor since 2008 and specializes in solar PV installation and electricity. Although he is a part-time electrician and teaches courses in OSHA certification, his favorite subject to teach is solar PV technology.

“He’s super hands on, super passionate about the subject and is totally into it,” said SRJC student Brandon Long.

Another student, Mike Ramey, said, “Byrne is super engaging, relatable, and really goes out of his way to find employment opportunities for students after they’ve finished the certificate.”

Professor Byrne took some time out of his day to talk to an Oak Leaf reporter as he dismantled his solar panel outside of the Southwest Center bungalow on the afternoon of April 4.

Q: You told me you were an SRJC graduate, when did you go to the JC? And what was your major?

A: It was Journalism. Just like you, I was an Oak leaf Staff Writer. I started at the JC in ‘96 after I got out of the Marine Core and transferred to Davis in ’99. I ended up being a political science major and then I transferred to the California Energy Commission through an internship, during the California energy crisis of 2001, where I learned a lot about energy and realized that solar was going to continue to grow indefinitely.

Q: What’s the employment turnout of those students who have completed the program?

A: I don’t keep track of every student, but I know of at least 12 former students who work for solar companies in Sonoma County now. But that’s saying a lot, seeing as the program has only been for three years and I can’t keep in touch with every student.

Q: How long has the SRJC had the Southwest center for? About how many students take classes out here and is there vacancy for more?

A: Well most of its all ESL and GED. I’m the only technology course out here. Some of the other buildings are red-tagged, but in my classroom, we have room for more solar PV students, now that the economy is doing better and less people are taking vocational classes. Students and I hope we can one day be an integral part of the technology department on the main campus.

Q: I know Doyle library on the SR campus has a rooftop array of 77 KW photovoltaic solar panels. Were your students/program involved with that installation?

A: No. They were building that in ‘09, just before the Solar PV certification program actually began. Unfortunately, it’s an inefficient design that hopefully, with measure H funds, they’ll do a better job next time because we owe it to the taxpayers to do better.

Q: You attended the John Perlin seminar on 6,000 years of solar energy. What was your opinion on the information given at the seminar? Has he been a figure in your career?

A: Yeah. I thought it was interesting. It was mainly about passive solar design rather than photovoltaic, so slightly different application, but just knowing about the history of solar was inspiring to me. He also wrote another book that inspired me on how PV beat out atomic energy in the space race and how NASA went solar, so in terms of off-grid systems that’s, I mean, the epitome of off-grid.

Q: What do you say to the off-grid skeptics that think Solar PV installation is too expensive?

A: Given that the price of modules are now 25 percent of what they were 10 years ago, they’re actually really cheap now and really powerful so the technology has really matured. So many of those talking points that skeptics have, are outdated.

According to Energy Informative.org, “Nitrogen tri-fluoride and sulfur hexafluoride has been traced back to the production of solar panels. These are some of the most potent greenhouse gases and have many thousand times the impact on global warming compared to carbon dioxide. Transportation and installation of solar power systems can also indirectly cause pollution” (EnergyInformative.org).

Q: What do you think about that statement? Do you believe it to be true? And if so, what’s your rationale?

A: Most of the stuff going into residential and commercial systems in the U.S. is all fairly environmentally benign. Silica is the primary ingredient in PV solar and in my opinion is far less environmentally harmful than some of the other technologies we have like cellphones and laptops. The modules made in the U.S. you can be sure are a lot more environmentally responsible than foreign modules. Where the modules are manufactured, says a lot.

Q: How is the Solar PV certificate program funded?

A: The PV program mostly pays for itself. I’d say that the major sourcing for this program comes from grants that I personally underwrite to CTE and Prop 39 funds.

Q: With the passing of 2014’s Bond measure H, can you state whether or not your program and/or students will be involved with upgrading and improving any facilities on campus?

A: We’re probably not going to be involved with any construction, most likely. Hopefully there’s going to be a requirement for local workers to be used though, in which case, maybe my students can have the chance to be hired on and employed.