A journey into understanding an expert on myths and the devil 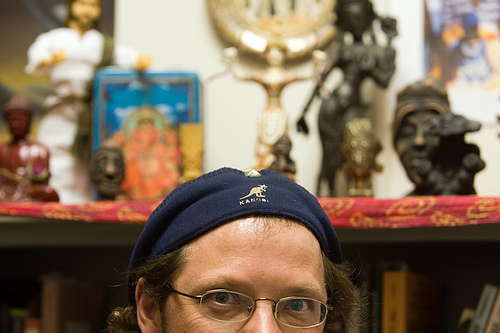 SRJC professor Eric Thompson poses for a picture in his eccentric office.

You can see professor Eric Thompson around campus riding his bike to or from school every day, or find him in his Emeritus Hall office, but make sure not to come in without knocking as he might be changing out of his bicycle gear and into his teaching clothes. Inside the office, amusing stickers that border on the verge between sacred and profane are plastered all over the desk. Awards from scholarly pursuits hang above where he sits; pictures from student projects and posters of Egypt dot the walls. There is a Kippa, a Jewish hat more commonly known as a yarmulke, and a scarf with the Star of David hanging off a vaguely menorah-shaped coat rack in the corner.

His bike leans against the side of the office, with the helmet dangling off the handle bars. When asked why he rides his bike everywhere, Thompson said, “Commuting on a bike puts all my sensory organs in direct contact with the world—air, wind, sun, rain—as opposed to a car, which separates my senses from the world in a little plastic bubble. I have been riding a bike as my major source of transportation on and off my whole life.”

Thompson hails from Seattle but settled in Healdsburg in 2009.

As a young man, he couldn’t have been further from the career path of college professor. He spent time during his youth at the Pike Place market; an open marketplace right by the bay, which also happens to be the birthplace of Starbucks. “It was a hippy hangout; it was my home-base,” he said.

His parents did not raise him to be religious; in fact his father is an atheist. He said of his mother, “If she had any kind of religion, I would say that it would be astrology.”

She was into psychic and spiritual phenomenon and would do card readings rather than talk to a priest or rabbi to get guidance. “She actually trained me and my siblings in ESP,” he said. “We would take an object and we would close our eyes and fondle it and see what kind of images came to us. Then we would try and interpret the images. She would test us because she knew where the object was from and its history but we didn’t. She would try and develop our ESP and it was the closest thing I had to religion growing up.”

Thompson’s first pursuit was as a fine artist, but he veered away from that as adolescence set in. He developed a strong interest in acting due to the exposure to the acting world from his uncle, who ran a company called Bath House. He was cast for a few roles in plays and recognized by talent agents. Acting consumed his life, and he was geared up full throttle on his way toward an acting career.

At age 15, he got professional credentials and joined an Actor’s Equity union. Thompson practically dropped out of high school to be a full-time actor. By the time he was a teenager he had been in 50 plays, TV nine times and even in a film.

At 17, Thompson went out one day for what he thought was another acting gig. He was decked out in torn army fatigues, with hair down to his waist, an ounce of marijuana in each pocket, possibly even a baggy of mushrooms, and a backpack with a toothbrush and a change of clothes.

He came back to his family a few days later in a dramatically different manner, as a born-again Evangelical Christian. His once long hair was chopped short, and he was dressed in a polyester suit and tie. Thompson had never before worn a tie of his own accord, apart from acting gigs. He carried a big thick Bible and told his family they would end up in Hell unless they accepted Jesus into their hearts and lives.

After this drastic conversion to a pious life, Thompson spent time teaching at Fuller Seminary to train others to be ministers and even preached in prison ministries. While teaching at seminaries, Thompson discovered his ambition to learn and developed a fascination for ancient languages. Thompson can speak German, Modern Greek and Modern Hebrew. He can read Ancient Hebrew, several dialects of Aramaic, Ancient Greek, Latin, Ugaritic and Arabic.

Thompson married at age 20 to a woman who shared the same religious beliefs. They spent 14 years together. He became involved in academia, and his wife followed to Pasadena while he earned his master’s degree. He steadily drifted further away from the strict religious views that had consumed him for years. When he and his wife separated, she wanted to keep the church they attended, and that was fine by Thompson, since he basically stopped believing in the religious doctrine. His love for religion flourished for 17 years, until academia seeped into his mind and disintegrated his faith.

Thompson then married Rhonda McKinnon and they’ve been together since 2007. The couple deciced to marry in 2012 once gay marriage  became legal in California. He has three children from two previous marriages: Christopher, 26, lives in Washington and is a glasser (cuts and installs glass), Carina, 21, an SRJC student, and Orion, 13, a Santa Rosa Middle School student.

Thompson’s studies led him into myths and eventually into Hebrew and Judaism as his main focus. He got his doctorate degree at U.C. Berkeley and was a research assistant at The Center for Jewish Studies. Near the tail end of finishing his Ph.D., he moved to Santa Rosa to become a full-time SRJC instructor.

SRJC student Nora Milton said of Thompson’s teaching style, “Every class is like a movie or a play. His passion for the history of the truth and his experiences as an actor pays much respect to his animation that leaves every class without a dull moment. His ability to translate biblical passages in a more contemporary way allows students to gain a better understanding of the Bible and makes it way easier to understand.”

Thompson loves all the classes he teaches for a variety of different reasons. His favorite class is the History of Satan. “I think it’s the most profound, and the most interesting and the farthest reaching. Studying Satan, teaching Satan is an opportunity to teach everything about all religions and cultures; the pursuit, what we fear, the way we pursue evil and the way we critique our surroundings is all in Satan,” Thompson said. The course’s section number is 6.66, a number associated with not only the devil, but with the Greek Goddess Aphrodite as well.

While Thompson does not actively practice religion, he enjoys such celebrations as the spring equinox and Beltane, a fertility festival celebrated on May 1 but astrologically happened on May 5 this year.

Thompson’s favorite holiday is New Year’s Eve. “At midnight on Jan. 1, I love to be with a small group of intimate family or friends, have some sort of libation, and talk about life. Talk about how we’re changing, and what’s next, and things like that. I have done celebrations and rituals for holidays for almost every religion,” he said. It might seem like Thompson has all the accoutrement of a religious man, but he just loves to be connected to family and friends and the seasons and cycles of life.