Brothers who rock climb together stay together 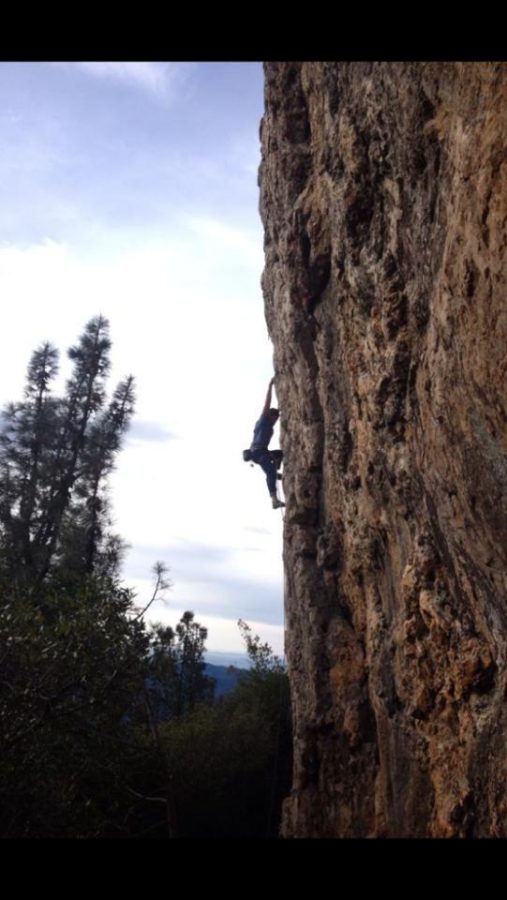 Brothers who rock climb together stay together

Santa Rosa Junior College student Nathan Johnson who has found himself in risky situations. Johnson recently took a trip to the coast where he decided to climb a cliff he’d never climbed before.

“I made it up the cliff, but when I got to the top I realized I couldn’t get off of it without climbing down. I stepped on a really slippery rock, so I slipped and I fell off that cliff,” Johnson said. “I fell in the sand, but it was a pretty good fall. Maybe 20 feet. I chipped my tooth.”

Johnson is no stranger to rock climbing, often coming home with aching arms and clothing dusted with white chalk.

The 18-year-old SRJC freshman spends his afternoons studying for his next big exam or clinging to rocks with all his might. Johnson has been rock climbing for over two years. He first began this hobby after an Analy High Scool friend brought him to Vertex. “It is definitely something that just kind of happened. I didn’t know a lot about climbing until my friend brought it up to me,” he said.

Johnson said there is no precise way to describe the feeling he gets when he climbs but, always ends his climbs with a feeling of accomplishment and relief. “After completing a route that I have been working on, it’s unbeatable. It’s definitely satisfying getting to the top. I think it’s fun to see how strong you are and push yourself,” he said.

Most people would never guess that Johnson was overweight as a child. He pushes himself to climb every day he can and also regularly participates in an array of physically demanding activities. Johnson recently ran a half marathon at Annadel State Park, over 13 miles of running on a rugged mountain trail.

Johnson’s older brother and climbing partner, Taylor Johnson, 20, said his younger brother is one of the most determined people he knows. “With everything he has done, he has changed himself,” Taylor Johnson said. “When he was young, he was a little bit bigger and got made fun of a little bit, but that only made him stronger. Now he works out every day and he wants to be the best he can be.”

Taylor Johnson believes that rock climbing has strengthened the relationship between them. He also expressed the motivation that his younger brother has shown towards him. “Every time we climb he pushes me to my full potential and he pushes me to climb harder,” he said.

“Every time I see him climb, he pushes himself and always does really well,” Taylor Johnson continued. “He has taught me that independence is really important, but relying on other people is also a much needed quality. This is the sport that brought my brother and I closer together.”

Nathan Johnson has many long- term goals, including getting degrees in radiology and human physiology. He plans to continue attending SRJC and then transfer to a four-year college but wishes to continue his pursuit of rock climbing. “My dream trip would be to climb around the world, but I really want to go to Bishop and maybe someday go to South America,” he said.

To Johnson, the most important characteristics of a good rock climber are perseverance and the ability to stay calm. To learn more about rock climbing, he suggests going to his favorite website, www.rockicemountain.org. or stopping by the local climbing gym, Vertex Climbing Center, where he can often be found climbing or working out.