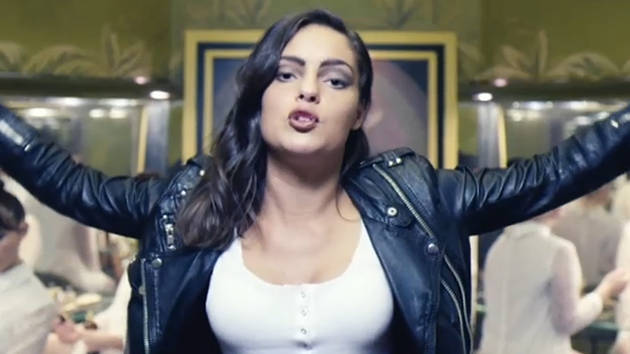 Nora Ekberg performs in her brother Aronchupa's video "I'm an Albatraoz." The video has over 160 million views on YouTube.

For Nora Ekberg, fame was not something she was aiming for when her brother asked her to sing vocals for his new song “I’m an Albatraoz.”

Ekberg currently attends the Santa Rosa Junior College for the five-week exchange program from Sweden. “I love being in California and Santa Rosa, I am enjoying every minute of it,” Ekberg said.

Just before arriving to Santa Rosa, Ekberg sang at the Ultra Music Festival in Florida, arriving later than the 20 other Swedish exchange students visiting.

Her success began thanks to her brother, Aron “Aronchupa” Ekberg. He gained fame when he and his friends released their first hit, also called Albatraoz. After touring Sweden, they began to write a new song, and with the help of his sister doing vocals, it blew up. “Since he wasn’t really in the business like he is now, it was just a natural thing that they would ask me if I wanted to join in and sing on the track, so I just did,” Ekberg said.

“Me and my brother have always been working together. We grew up in a family full of music and my dad was a musician. I’ve been a good singer and Aron has always been a good producer and it’s kind of a good combo.”

After releasing the song, its popularity spread fast, first in Sweden, Denmark, Norway and then Germany. “Our label picked it up and they said they needed something to make it go more viral than it already is and they said we need a music video. So we did it. We went to San Francisco and we rented this theater in Oakland and recorded it in three days,” Ekberg said.

That video currently sits at over 141 million views on YouTube. Also, it is No. 10 on the U.S. Billboard charts and is still on the top charts of most of Europe. With all the popularity this song has garnered, it is amazing to see someone handle the fame so gracefully.

“I’m still waiting for it to blow up in the U.S. ‘cause it’s been pretty big in Europe and Australia. So I’m hoping that it will blow up here, more than it already has,” Ekberg said.

Though Ekberg is currently studying entrepreneurship, music seems to be in her future. “I love it. I love music and I love being on stage,” she said.