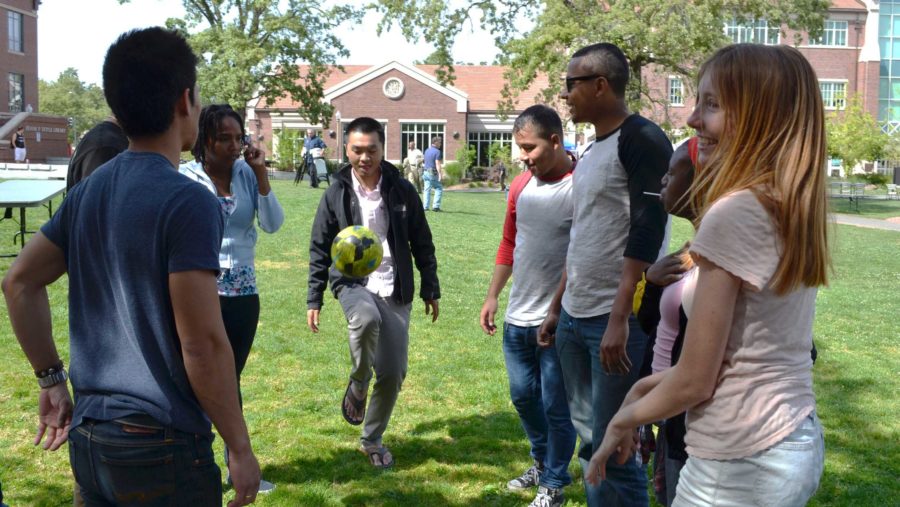 SRJC student Huy Pham participates in an informal soccer practice with friends, all members of the International Club

His manner is calm. He tightly pulls over his North Face fleece jacket that helps him withstand a chilly Tuesday morning, ready to discuss how much he has changed since attending school in America.

Huy Pham, 24, represents a jovial member of the international students studying at Santa Rosa Junior College who wish to excel in educational opportunities that may not be found back home, wherever that may be. Pham is from Ho Chi Minh City, Vietnam.

Despite his home country’s violent past with the U.S. Pham still wanted to study overseas.

“The popularity of American culture affected me. What I know about the U.S. are the popular images, like New York City, Hollywood,” Pham said. “Movies, TV shows and stories from Vietnamese Americans coming back to visit. I once visited Japan before and expected it to be similar, but it’s very different.”

Pham pursued his dream to study in America and ended up at a small private school in Texas at age 18. He spoke little to no English and enrolled in an English as a Second Language program (ESL). Even through all the struggles with ESL, Pham’s conversational English excelled at the Texas University. Yet he felt his expectations of America fell short.

“Some people will be rude to me here. I remember coming to a rodeo concert to see Kid Rock,” Pham said. “I was with five of my Vietnamese friends, and we heard a loud voice in the crowd yell ‘I didn’t know Asians like Kid Rock!’ I was just amazed that someone actually said that.”

Despite the rude comments, he says he rarely felt uncomfortable or in danger among locals in Texas. What bothered him was his experience felt bland in comparison to what he expected. With over 3,000 international students, Pham felt he could not gain an authentic experience. He wanted to see less of international students and embrace the fantasies he saw depicted of America as a kid.

After stumbling upon the SRJC website four years ago, Pham decided he needed to come to California and move to Santa Rosa.  He liked that SRJC looked like it was a smaller school than the one he was currently attending in Texas and liked that it offered the feel of a private school from the photos he saw online.

“I emailed a staff member, and she responded very quick, very professional, and made my experience easy to get me moving,” Pham said. “They’re [SRJC international counselors] there for you, and I can see the population of students from different countries at SRJC, even for being such a big school population, I can see maybe only 70 international students. Ok I asked myself, ‘Why don’t you move here?’”

Pham said he feeke he fits in with California culture. “Even though I’m from Vietnam, I feel like everybody thinks that I’m from here already. They recognize the diversity in California,” Pham said.

“I’m very proud to be mixed in with American people, witnessing their culture, how they live day to day, how they approach problems. It is an achievement for me to even be here,” Madigoe said.

Madigoe eventually leaves after a firm handshake and a cordial smile, telling Pham he hopes to see him later in the day.

Pham plans to transfer to either one of the several UC’s he applied to, or travel across the country to attend Cornell University in New York. The reasons why people have interest in moving from region to region fascinates Pham, which is why he chose to major in anthropology.  He said he doesn’t mind going across the country to a state he is unfamiliar with to study; he is interested in the movement of people and plans to major in cultural anthropology.

He wishes to travel across North America before he reaches a point in his life where moving long distances becomes a grim task.

Besides studying for all his classes, Pham is heavily involved with the international programs at SRJC, and likes to help new international students transferring to the school feel more involved in a foreign setting. “I’m currently president  of the International Club of Events,” Pham said.  “I want to give some other students chances to head the club. I will be leaving soon anyways.”

The club offers informal activities, like hanging out outside of class or going on group field trips around the area. Sometimes the club has formal events like inviting the U.S. ambassador in Senegal to visit. The club also hosts a gala where international students perform, according to Pham.

With all the work he has put into making international students get more involved, Pham will eventually move on next semester. Moving on is what cultural anthropologists do best. Pham’s friends and family in Vietnam urge him to stay put in the U.S. and find the best work available after graduating. Pham understands, but he will not necessarily follow the advice. What Pham has learned most while being an SRJC student is to follow his dreams and travel where his heart desires. His demeanor rings with an undeterred confidence, he will pursue his passions  relentlessly. Pham can thank the once-in-a-lifetime experience SRJC gave him for that.