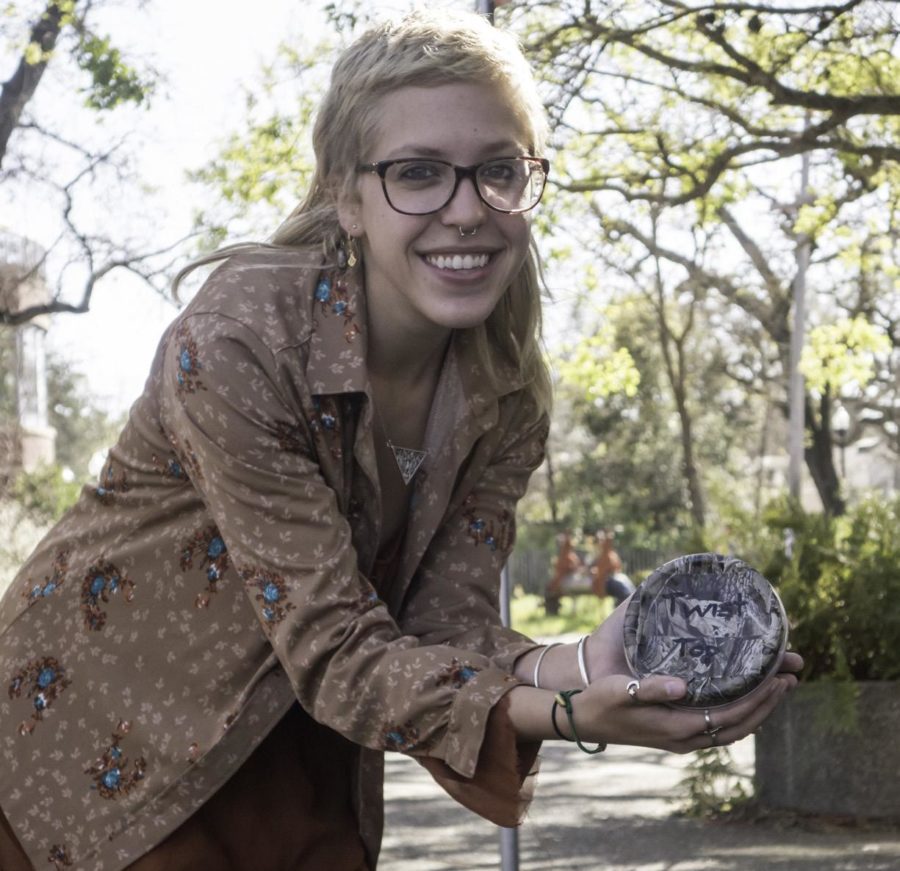 An SRJC student picks up a letterbox outside Emeritus while on her way to class.

I crossed the rickety boardwalk to its end, then counted back the planks on the walk until I found the specified board. I knelt down, but hesitated to reach blindly into the dead weeds that tufted out from beneath the end of the board. Who knew what loathsome critters lurked in that darkness? Steeling my resolve, I plunged my hand into the weeds and felt hard plastic. I’d found the letterbox.

This treasure-hunting hobby involves people following clues from websites to find hidden boxes. Each box contains a rubber art stamp, often hand carved by the person who planted it, and a small book of blank pages. Letterboxers take imprints from the box’s stamp in their own logbooks and leave imprints of their “signature” stamps in the box’s logbook.

The mission each letterboxer must remember is to be discreet when finding and rehiding boxes, which can go missing when non-letterboxers find the box and tamper with it. People plant boxes in sites ranging from urban storefronts to miles-long hiking trails, so people can choose the level of activity required to find a box.

I first learned about letterboxing from an internet search for rubber stamp carving. It appealed to my love of rubber stamp art, and offered lots of little adventures that would help me learn about the area in which I live.

Letterboxing is also a health aide. I’ve never been interested in going for a walk just for the sake of walking. If there’s no destination, there’s no point in my mind. Letterboxing gives me a destination and gets me moving.

Unfortunately, the contents of the box I’d found under the boardwalk were soaked from rain. Uncertain which of the two stamps inside actually belonged to the box (the extra stamp may be a “hitchhiker,” moving from box to box) I took imprints of both in my logbook. The wet book made it impractical to leave my stamp image in it, so I decided to bring the box home with me to dry it out. When I got home I would post to the website on which I’d found the clues, letting other letterboxers know I had removed the box from its hiding place.

I drove to the next letterbox site with my dad and his dog. As we approached the location I wondered how I could be discreet about this hunt. It was next to a post office and there were people coming and going.

After waiting in vain for foot traffic to thin out, we decided to let the dog out of the car for a stretch. That turned out to be the trick. While Dad took the dog around to greet and distract people, I searched under the tree beneath which the letterbox was supposed to be hidden, but I couldn’t find it.

Looking at the area in general, Dad pointed out that some dirt and rocks had been moved recently, probably to clear them out of the parking lot. The letterbox may have been buried or discovered and removed. Disappointed, we drove home where I posted about the missing box to the website.

I still wanted a fully successful letterbox find, so the next day I talked my cohort Matt into going with me to find at least one of three letterboxes hidden in a local cemetery. The directions for all three boxes started from the same point, but I found them all frustratingly difficult to follow. The landmarks were names on gravestones, and both Matt and I found it hard to read most of the grave markers in the diffuse light of the overcast day. As we reread the clues for one of the boxes, we realized we had stumbled upon a marker— a large cross that appeared halfway down the directions, so we went back to that point.

The clues said to continue on the path until it turned to the left, but we didn’t know which direction we were supposed to have come from. We decided that only one path met that criterion. We followed it to the curve and looked around for the next landmark, behind which we found the final clue.

I moved aside a suspicious looking rock to find our treasure. The box was well sealed, the contents dry and intact. I happily exchanged stamp imprints with the box and re-hid the box under its rock, satisfied with a successful hunt.