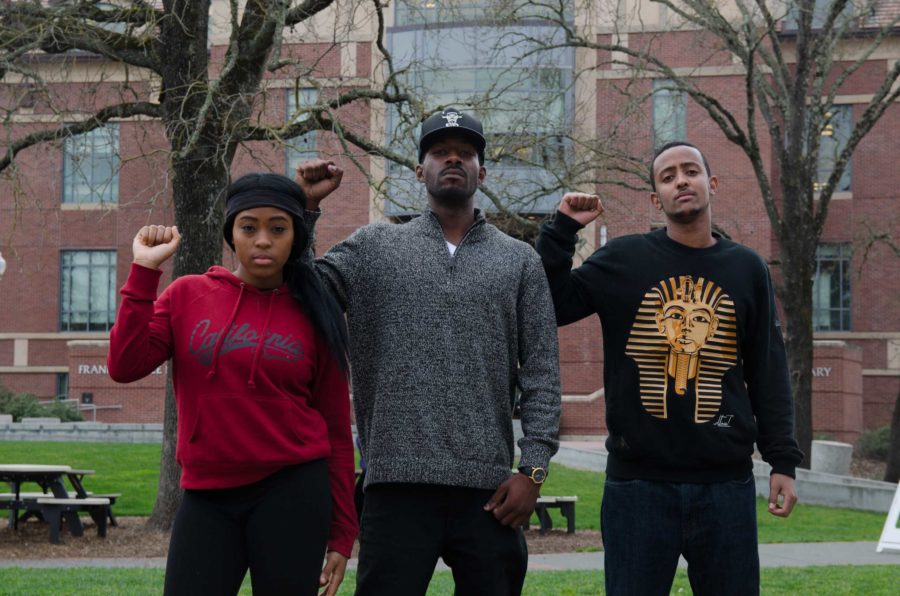 From Left to Right: Darika Ramsey, Damion Square and Elias Hinit standing proud in the Doyle quad at SRJC.

February is Black History Month, an opportunity for all people to learn about the contributions black Americans have made throughout history. At Santa Rosa Junior College, the Black Student Union hopes to embrace and enhance that opportunity and spread it throughout the year.

The BSU wants to be a resource for students to learn about black culture, history, philosophy and politics within a safe, accepting environment. The 13-member club is currently co-chaired by Elias Hinit, 21, Darika Ramsey, 20, and Damion Square, 28.

The BSU was founded in the ‘60s. “It had a very long hiatus until it had a good group of students – smart, intellectual warriors – to come together and form this much-needed organization on campus,” Hinit said. The students who resurrected the club in the fall of 2012 included Square, Mark Goitom, and Angela Webb-Pigg.

Hinit believes Black History Month is an important reminder of a complete history. As Reverend Ann Gray Byrd of the NAACP said, “It’s a reminder of how our history books do not reflect the diversity of the students they serve.”

Square, one of the co-founders of the club, has a different opinion. “Every month is Black History Month,” he said. “It’s no coincidence that the month that was chosen to give to African-Americans just so happens to be the shortest month on the calendar year. For all the contributions that we’ve made to this country to be bundled into one month in which we show appreciation to black leaders and heroes, I think it’s kind of a slap in the face,” he said.

For Hinit, the BSU provided a way to not only get in touch with black history, but also with himself and regain confidence. “The Black Student Union changed my life. It really enlightened me and made me a much more critical thinker,” he said. “We follow the practices of many revolutionaries. We are working for all the people who came before us and fought for us, and the people who are continuously trying to fight for us. We’re working for equality for all people.”

Square said the club provided a way to achieve a higher purpose in life by sending five of its students to Tanzania. They put together a fundraiser and raised almost $17,000. “We broke every single fundraising record at this campus. I think we were the first student club to ever raise enough money to send a group of its own students to a third-world country.”

Growing up without a father figure, Square found his voice and his passion through the club. His aim is to truly change the way people think when they see a black person. “Now is the time for change,” he said. “I’m not talking about some hopeless, grandiose detachment from change. I’m talking about radical, revolutionary change on a fundamental level.”

Square’s philosophy is that racism is bred in one’s environment. “If you grow up in an environment that embraces racism, that embraces hatred, then you’re probably going to grow up bringing up those same beliefs,” he said. He added that if you don’t grow up in this manner, then it’s easier to not see skin color as a factor.

Square also calls for black self-respect. “Start to love yourself,” he said. “It’s about black love, unity, respect and power. Once we start loving ourselves, who we are, where we come from, our dark complexion… once we start to embrace ourselves and our culture, it will be easier for other people to embrace and love who we are.”

Although Hinit was elected co-chair in 2012 he admires what co-founders Square and Goitom contributed. “They’re the ones who really put it together,” he said. “They found the faculty adviser, had a great structure and taught themselves how to be leaders. They were unbelievably intelligent and were master multi-taskers. They got their goals accomplished by any means necessary.”

The BSU currently meets twice a week in the Student Leadership Center at Bertolini.