The Shoe Surgeon: A man with a sewing machine and a dream 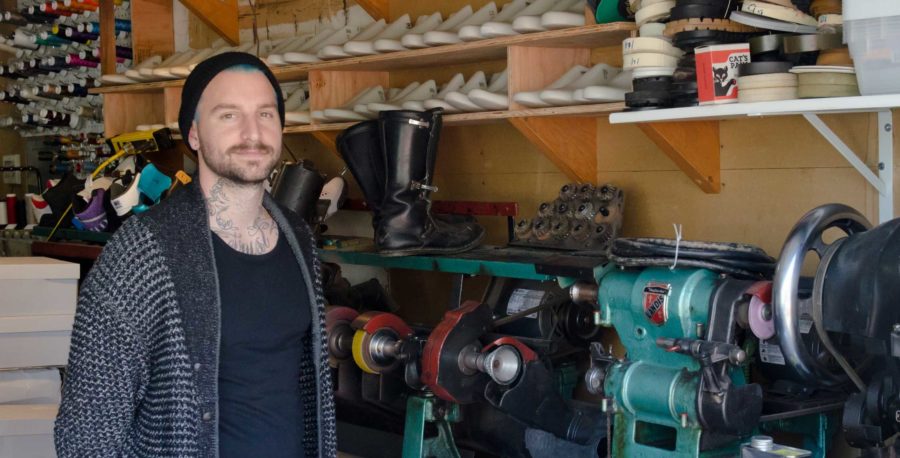 Dominic Chambrone, The Shoe Suregon, at his Santa Rosa studio where he designs unique footwear for celebrities like Will.i.am and Justin Bieber. Chambrone is a former SRJC student.

It’s hard to find shoes with studs, leather fringe or stylish zippers that go in different directions at a normal store. These custom-made shoes are worn by top celebrities. The hand-made, one-of-a-kind alterations The Shoe Surgeon does to everyday shoes are unlike any other on the market and have grabbed the attention of  big names like Justin Bieber, Fat Joe and Will.i.am.

“I made shoes for Will.i.am to perform at the MTV Video Music Awards,” he said. “When I went down there, I hand-delivered them and I met Justin Bieber’s stylist and we just kind of connected.”

Each pair of shoes takes up to 60 hours to complete and retails from $1,000 a pair and up. The man behind the shoes, Dominic Chambrone of Santa Rosa, 28, built his company on a passion for design.

The idea that school isn’t for everyone isn’t an idea many students at Santa Rosa Junior College can relate to, but for the Shoe Surgeon, it’s a reality.

“I took classes at the JC for fashion, pattern making and fashion studies. I was seriously there for a half-hour, maybe an hour and I had to leave,” he said. “I just can’t go to school I guess. I can’t be locked down to anything.”

At first glance, the garage Chambrone converted into his work studio consists of a variety of giant machines, a whiteboard full of orders and dozens of shoes scattered throughout the space. Most would assume the owner took classes to learn how to operate all the machines inhabiting his studio, but for Chambrone this was not the case. “It was mostly trial and error,” he said.

From a young age, Chambrone was fascinated with shoes, but the first time he recalls altering a shoe was during middle school when he wasn’t allowed to wear red or blue because of the colors’ gang affiliation.

“I had to wear a lot of orange,” he said. “I would color my shoes orange to match my shirts.”

In high school, Chambrone graduated to airbrushing. He would often get the newest pair of Jordan shoes before they hit the stores. The latest pair of sneakers weren’t enough for him after his friends also started to acquire them early. His need to have unique items prompted him to airbrush his first pair of shoes. “I like to have stuff no one has and I like to get it before it’s even out,” he said.

The next day he wore his freshly airbrushed shoes to school and the reaction he received motivated him to continue. “Everyone started freaking out, all my friends were like ‘can you paint mine,’” he said. “I was like ‘sure,’ I just kind of did it.”

Chambrone realized his need to have custom made footwear wasn’t the only reason he liked altering shoes.“I love the feeling of someone else having something that I made them, and them being super stoked about it, and it being one of a kind,” he said. “After that it was just how to keep going further and make it unique and do stuff that no one else was doing.”

The problem with airbrushing was it didn’t last over time. Chambrone was determined to come up with a new way. After high school, he received his first sewing machine from his grandmother as a graduation present. “I was making shirts and getting pieces of material and gluing them onto the shoes,” Chambrone said.

The passion to develop long-wear designs led Chambrone to take a private shoe-making course in Ashland. The school only took six students at a time to provide an intimate learning experience, but he felt it was the oposite for him. “I went there and I left and felt like I didn’t learn anything,” he said. “I just had to start doing it. That’s how I learn just messing a lot of s*** up.”

After enough attempts to alter sneakers on his own, Chambrone searched for shops to help him learn the shoe repair process, what different machines did and what he would need to get started.

“The first guy I asked was on South A Street; he was at the Old Russian cobbler. He cursed me away,” Chamborne said. “He seriously was like ‘get the f*** out of here. You’re going to take all my business.’”

Chambrone didn’t have any luck until he went to The Cobbler in Windsor, where Daryl Fazio became his mentor. Fazio was hesitant at first because he didn’t want someone without any prior experience behind the counter, but Chambrone persisted. The next day he returned and told Fazio he just wanted to look from the counter.

Fazio found himself breaking his own rule after seeing the determination the future Shoe Surgeon had. “He realized that I was actually really interested so he let me come behind the counter and I would just watch him. He saw the passion,” Chambrone said.

Chambrone is thankful for all he learned as Fazio’s apprentice. He eagerly offered to help whenever Fazio was backed up as a sort of thank-you for allowing him to learn the trade.

“I asked him ‘what can I do to help you out?’ so I would sew stuff for him and watch him sand, then he’d let me sand stuff,” he said.

Though Fazio was patient, Chambrone realized he learns best from his own mistakes. “That’s just how I learn,” Chambrone said. “He was like, ‘do it this way’, but I would still do it my way like 10 times.”

The support Chambrone received from Fazio was life changing because it gave him the tools he needed to start his own business. Thanks to Fazio, Chambrone was able to learn what machines he would need to perfect his home studio to create products he would sell online.

“He was willing to share the craft. Most people who are making shoes that are my age, they don’t want to share [because they are] greedy or whatever it is,” he said.

At first Chambrone didn’t make any money with his designs. “It wasn’t easy, I was giving away free shoes. I couldn’t eat. I couldn’t really do much, but I had a sewing machine and I was just making stuff,” Chambrone said.

What kept him going was the feeling it was his niche, what he was meant to be doing. “It was the only thing making me happy,” he said.

Having started his brand with only a small sewing machine after high school,  all his hard work paid off  after  various music artists and professional athletes took notice of his creative designs. This attention brought Chambrone more buisness and now has more than 80 orders to keep him busy at his workshop.

Chambrone recently brought on a business partner, Kyle Riggle, so he could focus on his designs. With marketing help from Riggle, the pair plan to expand  their brand with a small shoe factory in Sonoma County.

Chambrone now speaks to  school children about following their dreams. He feels the need to give back   and spending his free time talking to kids is worth it, as long as he can make a difference in just one of their lives.

“I go to speak about my trade, but also how I got started to actually find my passion and make a living doing it,” he said.

Chambrone doesn’t want students to drop out of their classes or say, “Oh yeah he didn’t go to school and now he’s killing it.” His main message is for students to follow their passions.