Tinder: to use or not to use? 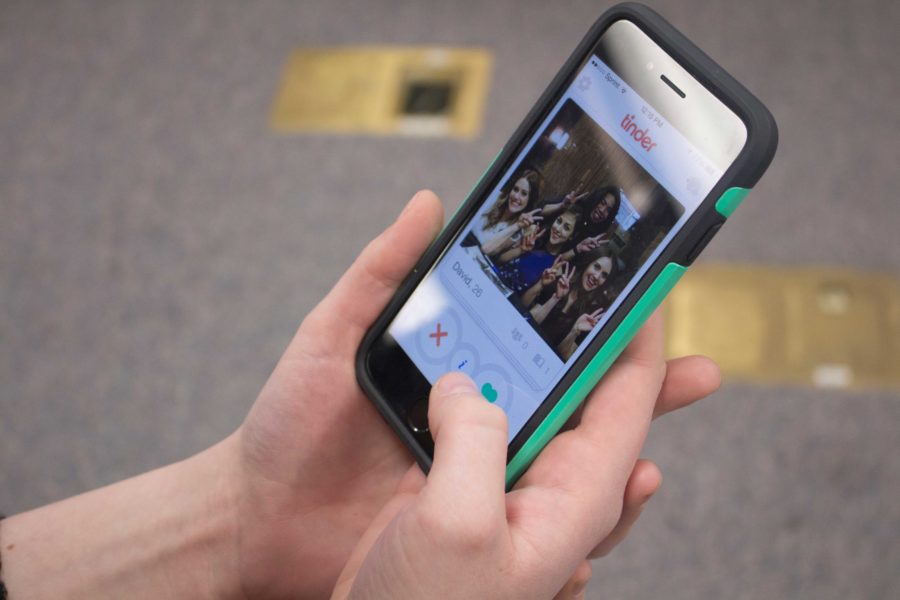 Kelsey Matzan swipes through Tinder, an app that lets you search through other nearby Tinder users, on her phone in search of a date.

Have you been looking for love in all the wrong places? Maybe you should try Tinder.

Tinder is a free app you can download to your smart phone. It allows you to search for fellow Tinder users in the area, which you can define with the app’s settings. You can also select age range and preferred gender.  The app searches for people within your set preference and shows you pictures of potential matches. You can then swipe right or press the “like” button if you’re interested and want to meet the person, or swipe left or press the “dislike” button if you’re not interested.

Tinder was designed by Sean Rad, Justin Mateen and Jonathan Badeen. It launched in 2012 and has since become one of the more popular dating apps with a plethora of users. It’s uncertain how many people use Tinder on a daily basis because the app’s designers have yet to comment on the actual number of users.

Santa Rosa Junior College students have had mixed experiences with the app, but a few have had positive ones.

Kyle Obranovich, 28, feels it’s a good way to meet people. “A lot of people are very introverted. Tinder allows a way to seek people out of their little internet bubbles,” he said.

The app can bring two unlikely people together. Obranovich has met a few women through the app, one of which happened to come in to the coffee shop where he works. The two had matched four hours earlier.

Cyrene Howland, 18, views Tinder as a tool for people who can’t find people their age. She sees it as being useful for professionals or those who can’t necessarily go out and date as often. Howland added that she might consider using the app when she’s older.

Neil Canon, 20, has had a different experience. “When I would match people, I’d only get matched with [women] I think were prostitutes,” he said.

Canon complained that he’d get sent to obscure websites, and he chose not to respond to these women as a result.

A majority of students were skeptical about using the app. Joshua Woodruff, 20, claimed that Tinder is full of fake profiles. “Of all the actual encounters on there, out of maybe 10, two are real,” he said.

Rose Kitchel, 20, has never used Tinder and refuses to try. The app is “like a cesspool of humanity waiting to get laid,” she said.

Tinder seems to have a reputation for being sketchy, but is it really deserved?

Benjamin Howard, 20, doesn’t think so. He thinks technology is convenient. “It can find someone quickly and easily for someone who maybe does not want to find a potential partner in a more conventional manner,” he said.

Regardless of what students think, it’s hard to argue that Tinder is not a potentially useful app. It’s a quick tool to find someone in your area. Though the connection between you and this person is initially based on a picture, it remains a useful tool to find someone with whom you may form some sort of connection. Just be aware of the potential pitfalls.