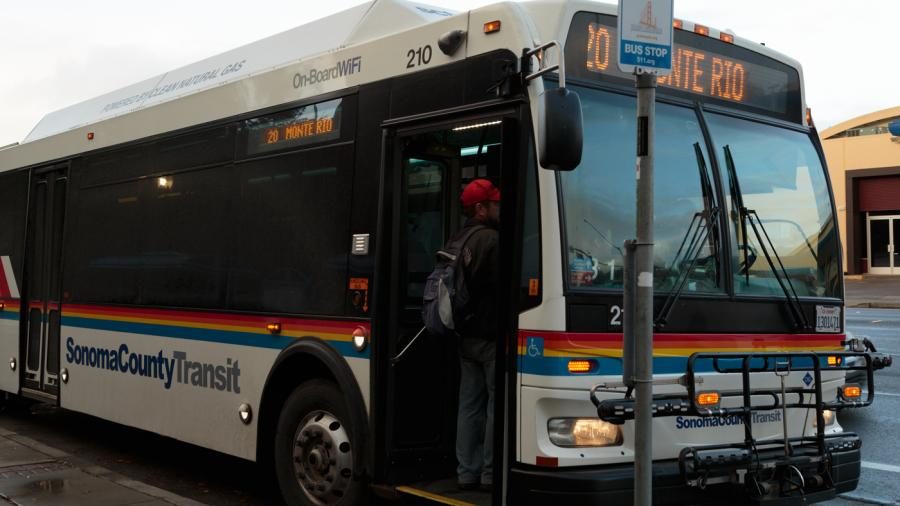 The use of public transit systems by college students is growing, according to the Transportation Research Board of the National Academics. Sonoma County Transit is free to ride for students and veterans.

On a Thursday morning, Chris Beebout waits at a Santa Rosa Transit stop for a bus in route to Santa Rosa Junior College.

A stranger walks up to him and promptly says, “The world does not fully understand how trees take water from the ground.”

Taken aback, the confused Beebout returns with the natural question,  “what?”

The stranger proceeds to babble about scientific conspiracies and lies, for what seems like an eternity for Beebout.

Beebout, like hundreds of other SRJC students, has experienced the weirdness of public transit – a realm where encounters like these are not only commonplace but expected.

According to the Transportation Research Board of The National Academics, the use of public transit systems by students in college communities are growing.

The TRB also states college communities are encouraging use of public transit to lower vehicle emissions, especially in high population centers like the Bay Area.

These and other socio-economic factors lead hundreds of SRJC students to regularly ride the bus to school. Only a few escape the seemingly inherent odd situations that characterize bus rides.

Students who ride the bus usually have to have a strong stomach to get to and from school without becoming squeamish. The smells of the bus are many and mostly unpleasant.

Thomas Sisson, an SRJC student recalled a bus ride where he witnessed a fellow passenger urinating on himself.

The rest of the bus soon smelled the soiled passenger and the driver asked him to leave, Sisson said.

“I felt so embarrassed for him, it was so bad,” he said.

Urine is  not the only unfortunate smell SRJC passengers have to endure. Beebout said a man who he describes as “really fat and smelly,” consistently sits next to him on his route to school and “stares at me.”

“I try to stare out the window but I know it’s happening,” Beebout said.

The personalities that occupy the bus can be colorful and entertaining, but they often keep SRJC students on their toes.

On one bus ride, SRJC student Daniel Straub was riding home when he noticed a transient looking passenger staring obsessively at him and his girlfriend.

He never spoke to them, just stared intently with an angry look, Straub said.

When the staring passenger eventually reached his stop he stood in the doorway of the bus, turned to Straub and his girlfriend and started screaming at them and explained in a stream of violent profanities what he thought was wrong with them, Straub said.

“It was pretty nasty, he really supremely had a problem with us,” he said.

While some bus experiences can be unpleasant and violent, others can just be strange.

A few weeks ago Sadie Bramlette, an SRJC student, overheard an old man talk about “how he wants a 25-year-old child bride to have another child with because all of the woman his age are past their prime and therefore not suitable to date,” Bramlette said.

He then quoted scripture a few times and said something about one of the followers of Jesus impregnating a 97-year-old woman, she said.

Bramlette’s experience is one shared by many who ride the bus. Peculiarity is simply an accepted part of using public transit.

Not all peculiar bus encounters are bad though – some can be pleasant and informative. SRJC student Mason Gilligan has experienced the positive ends of bus rides.

“There is this socialist activist guy named Herold who is always riding the bus back and forth,” Gilligan said.

“He’s always talking about politics,” Gilligan said, and passing out pamphlets to people and talking to anybody who will listen about; police militarization, the 60s socialist revolutions, contemporary Americas political inactivity and how he thinks
Castro was a good guy.

“He’s in his 80s,” Gilligan said. “And you can tell that he’s actually a pretty educated guy. I enjoy talking to him.”

Straub described these sorts of characters as “transient philosophers,” people who share their version of wisdom to people on the bus and “hold court even though there is none.”

Straub went on to characterize the bus as the “gift basket of humanity” and that its passengers are made up of “people from all rungs of life.”

For hundreds of SRJC students this “gift basket” is a daily dosage of strange. They see it all, from disturbed homeless people, to screaming veterans, to sketchy junkies, to weathered drifters.

Every Thursday morning Beebout is greeted by the strange man at the bus stop, talking about how God’s Kingdom will destroy all forms of government, and how mankind can have no way of figuring out photosynthesis, and other notions of the mysterious “Transient Philosophers.”