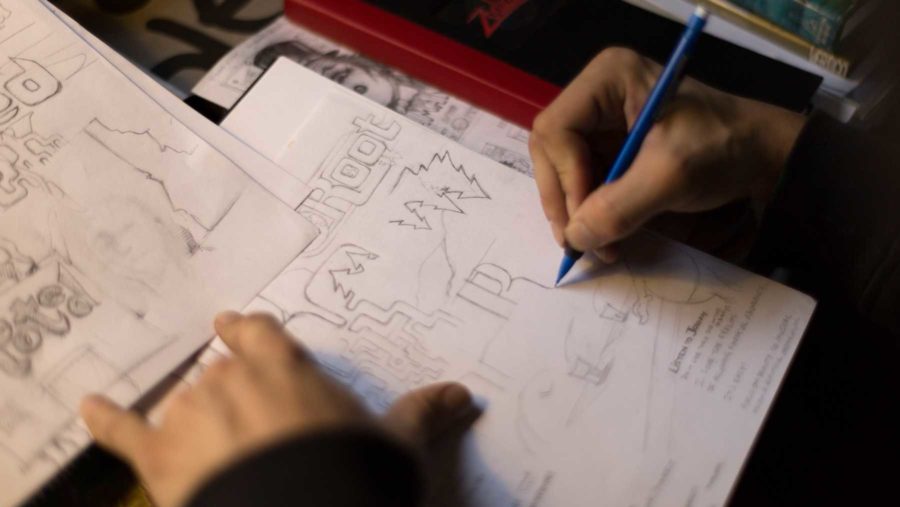 Local artist and former SRJC student Dan Katra opens the doors of his Santa Rosa studio to show samples of his artwork, including album covers and restaurant menus.

Former Santa Rosa Junior College student Dan Katra creates art that is difficult to categorize as he has carved out a niche easily overlooked by a generation raised in the digital age.

He is both designer and fine artist, drawing inspiration from psychedelic poster art of the ’60s with the jovial or somber quality of Chicano art. He produces his initial sketches organically with pencil and paper then primes them using digital software.

Q: What classes did you take at SRJC?

A: I started going there in 2005, maybe. I had already been living here for a year and had started apprenticing with Stanley Mouse. He got me going to a lot of figure drawing classes in the Bay Area in general. I was a complete novice along those lines. He didn’t specifically tell me to go to the JC, but I enrolled anyway and met my other mentor pretty early on in that process through the art department: Alan Azhderian, who is a legendary figure drawing instructor who only teaches one section a semester.

This guy has the entire class standing up drawing on large sheets of paper with the charcoal and cutting back into it with the eraser. It was just an entirely different form of drawing than I’d ever seen before, and he is just like the most brilliant poetic guy. So that was huge. I think I did four semesters with him. During that time I think I took all the other foundation art classes too.

Q: How did Stanley Mouse become your first mentor?

A: He had done like half the [Grateful Dead] record covers. I was too young to really comprehend. I didn’t know him by name until I was living in Colorado years later.

Q: Why did you move to California?

A: I was kind of trying to finally make my West Coast break then. I’ve always traveled out here since ‘97. I spent two summers in Oakland as a kid. My dad rented a house there. I’ve just always loved everything about California. But I was jaded too in that I was reluctant to  [move] and kind of a little scared honestly.

Q: What do you mean jaded?

A: The same reason a lot of people don’t. There are a million weird things associated with California — half of them true. Still to this day I mean there is a certain level of people resent[ing] you for being out here on some level. Like, “Oh that must be nice. Are you selling weed and stuff?” Or, “How do you afford to be out there?’ And all this stuff. And it’s like yes, well it’s not easy, but you know. It’s as easy as anywhere else. It’s just funny. For years I’ve just thought the people who are meant to be out here are here and the ones that aren’t just aren’t so.

Q: Why did you choose drawing and painting as your medium?

A: That is just the foundation of art, to be able to draw what you see. Stanley or somebody said it. If you can draw what you see, you can draw anything. People focus too much on the outline. If they are trying to draw a tree they get it all wrong because they are set so specifically on one thing. But if you view it more like a shape, you know, do the artist squint, the shaded areas become a mass like a shape. Rather than seeing a hundred branches, if you squint you’ll see it’s just a general shape and not just a shape. But it has kind of a flavor to it. It has a gesture. It’s like a person. A tree has a vibration. Some trees seem very confident in the way they’ve branched out, and there is some logic to it and some trees have this amazing sort of chaos to them.

Q: What is your favorite thing about making art?

A: It’s just magical. It just defies all reason. You cannot only give yourself this crazy joy by seeing the image come into being; then you start to tap into these weird realms of higher consciousness where it’s almost like you know what needs to be done. You start to see things before they actually happen. That is some crazy stuff. It’s like being in sports and all of a sudden you know it’s going in before it even leaves your hand. It’s like the weird higher state of consciousness.

Q: What advice do you have for aspiring artists at SRJC?

A: Be conscious about artists you admire. Go ask them. Go to the source. I think people are too content with receiving information third-hand. They take a class in something art-related and hear about artists that are around. Basically because people don’t have confidence or don’t want to embarrass themselves to go knock on this guy’s door or call them up. I think that’s the only way to really learn a trade  is to have some. Be really conscious about who your inspirations are. And go try to talk to them, basically, and watch them work.