‘The Spice’ Flows From Santa Rosa 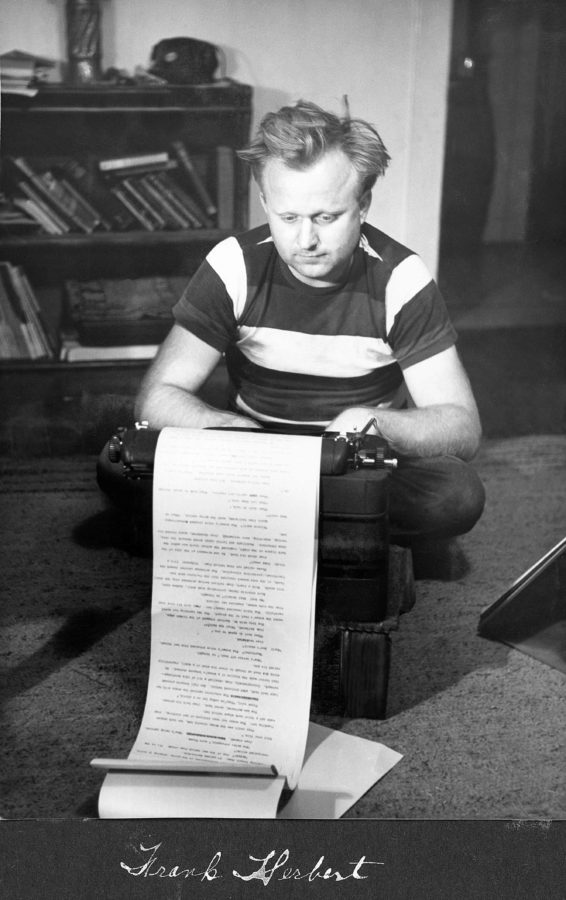 Santa Rosa is world-famous for its plant wizards and beer alchemists, but few people know its place in science-fiction history. Long before Frank Herbert published his masterpiece “Dune” in 1965, he lived in Santa Rosa when his first sci-fi short story got printed in 1952. Traces of Santa Rosa can be found throughout his later books, including “Dune.”

Frank Herbert moved to Santa Rosa in April 1949, after The Tacoma Times folded, with his wife Beverly and 2-year-old son Brian. They were soon joined by Bruce, born two years later. Herbert worked for The Santa Rosa Press Democrat for four years as a photojournalist, writing a wide variety of features, columns and news articles – including one about the very first Doyle Scholarship Fund check presented to Santa Rosa Junior College. The Herbert family moved to Lake Chapala, Mexico with sci-fi writer Jack Vance in September 1953 to start a writer’s colony.

My search for this lost archive of Frank Herbert articles started when SRJC journalism instructor Anne Belden took our News Gathering class on a field trip to The Press Democrat last year. I asked the editors if they had an index of the articles Frank Herbert wrote while working there.

“We haven’t digitized issues going that far back,” editor Jim Sweeney said. “But I, for one, would be interested in seeing that. Maybe we’ll have an intern do that some day.”

“Okay, you talked me into it,” I quipped. At the time I was just joking, but later I started taking the idea seriously. My research began last summer when Jim Sweeney let me access The Press Democrat’s newsclipping and microfilm archives, but that fall I took a break for two more semesters to write for SRJC’s Oak Leaf News.

My assignment: covering the trial of the campus cop caught pilfering a quarter-million dollars from SRJC parking meters. I attended each of Jeffrey Holzworth’s courtroom appearances for three semesters, up until his May 29 sentencing. While I never got paid, I earned a total of three News Writing awards.

With Holzworth behind bars, I headed to the Historical & Genealogical Library to finish scrolling through rolls and rolls of microfilm. In total, my research uncovered 138 articles and over 200 photographs “by Frank Herbert” during the four years he lived and worked in Santa Rosa.

The Press Democrat’s first Frank Herbert byline appeared April 25, 1949, “14-Year-Old Bride Misses Death by Hair’s Breadth!” His first photo-feature appeared May 22, 1949 with the epic title, “The Things You Find In The Garbage… Old Automobiles, a Human Skull, Money, Silverware All in Day’s Work at the Dump.”

Frank Herbert wrote news articles with spicy titles like “Location of Freeway Signs Confuses Many Motorists” and “Judge Greene Dislikes Courtroom.” Several of his articles highlight local features of Sonoma County: the Gravenstein apple crop, the drop in egg prices, the county spelling bee and a series of articles about the telephone company’s plans to upgrade to dial-phone technology. There is even a photograph of Santa Claus sitting on Frank Herbert’s lap!

SRJC is featured in five of Frank Herbert’s photos and articles. He photographed a Day Under the Oaks fashion show and a visit to the Bear Cubs football team by Frankie Albert, 49ers quarterback and later head coach.

The craft beer movement in Santa Rosa is older than people think, and Frank Herbert documented it himself. His photos of Courthouse Square shows the old Grace Brothers Brewing sign, proudly boasting: “A Sonoma County Product.” Herbert’s photo of a harvester is captioned, “Truckload of hop vines is swung into automatic stripper at W. G. Dutton Ranch on West College Ave.” The hops must flow!

Frank Herbert explored a “surrealist extension into the fourth dimension” in his Aug 25, 1950 Press Democrat article, “To One Part Verne, Add Galley of Zomb, Drop in Heathcliffe and expect Occidental.” Frank Herbert’s twist on a drive in the country could be considered his very first sci-fi story, years before his “Looking For Something” got published in the April 1952 issue of “Startling Stories” magazine.

Santa Rosa’s influence on Frank Herbert shows in his later works. Before “Dune” became a best-selling series, he published “The Santaroga Barrier” in 1968, about a small town in Northern California with the oddly familiar name of Santaroga.

Elements or characters in “Dune” are foreshadowed in Frank Herbert’s early Press Democrat articles: a family of model train enthusiasts voice-controlled their train set in December 1949 with a “weird device” – like the Bene Gesserit controlling people with “The Voice.” That same month he wrote about decorating and lighting the Cedar of Lebanon tree at Luther Burbank’s Home & Gardens, where the “plant wizard” is buried by his greenhouse – like Dune planetologist Liet Kynes, buried in the same sands he tried to transform.

Frank Herbert rode in an Air Force jet May 1950 and said the distance from Santa Rosa to the airbase that took 45 minutes for him to drive only took four minutes by jet. “I am still trying to accustom my mind to a new conception of time and distance” – like Dune’s Guild Navigators folding space.

Most prescient of all these lost archives is Frank Herbert’s July 1952 photo of 685-pound ‘Tiny’ Atkins, bedridden after a car accident, loaded bed-and-all by five men into a moving van. Watching their efforts, the budding sci-fi writer must have imagined some sort of gadget to help lift the man – just like Baron Harkonnen’s anti-gravity suspensor belts.

I could write a book about all the fascinating Frank Herbert articles I discovered. In fact, I’m calling it “Frank Herbert’s Lost Archives, vol.1: The Santa Rosa Press Democrat 1949-53.” It’s dedicated to my brother Robert the Magician, who died this summer after surviving AIDS for 18 years.

The sands of time forget many things, but now people will remember that Frank Herbert’s spice flowed from Santa Rosa.