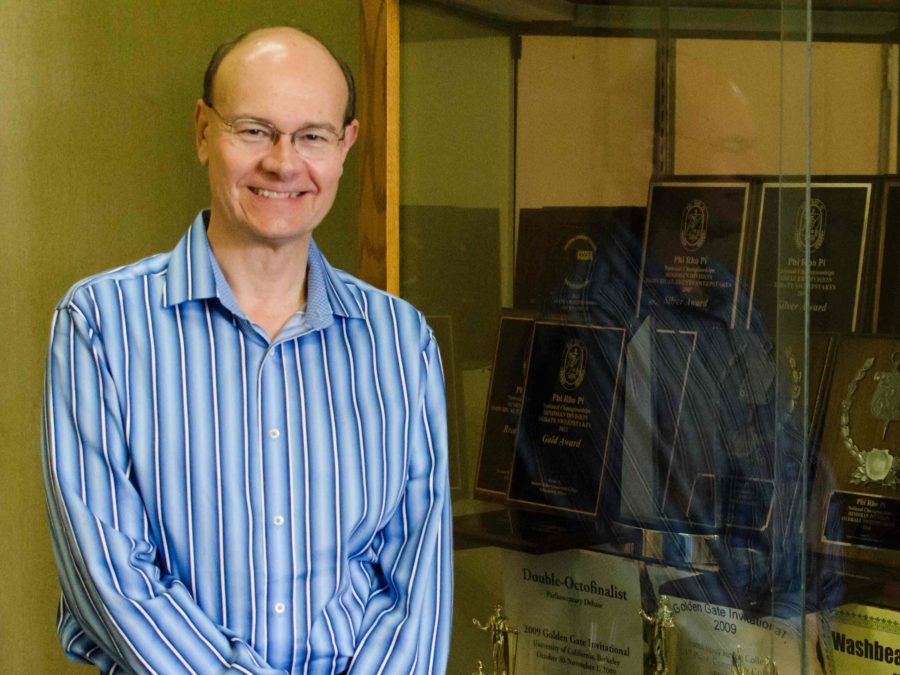 A proud coach, Hal Sanford leads the debate team to several victories since 2012.

Sanford brings life into his classrooms and creates a safe and fun environment for his students so they approach a subject as intimidating as public speaking with open arms.

Sanford inspires many of his students with his upbeat attitude and dedication to teaching – the same teaching style that inspired him. The biggest influence for Sanford was his motivating high school debate coach, George Stege. “I sensed with him that he cared, and you can’t fake that,” Sanford said. “What I try to do with my students is transmit that same genuine concern.”

Before landing his teaching position at SRJC, Sanford started his educational career earning his Bachelor of Science in speech at Northwestern University. He attended the University of Southern California School of Law where he received his Juris Doctor. With a lawyer for a father Sanford drew a correlation between debating and litigating, and saw being a lawyer as a “prudent course of action.”

As a civil litigator, Sanford handled critical business cases. While he admits that the high-stakes cases had a certain rush and emotional component, the overall stress and demanding nature of the job simply was not fun. Sanford described himself as being more wired to teaching and would rather focus his interest on the students.

After he left his law career to pursue his passion for teaching, Sanford started working at Sonoma State University in 1992 in the Upward Bound program, teaching debate and English to first-generation college students. In 1994, Sanford received a part-time position as a speech instructor at SRJC, which gave him time to spend with his 5-year-old daughter.

When his daughter was in high school, Sanford increased his workload at SRJC, and in 2007 began traveling with the debate team, volunteering his assistance. In fall 2012, SRJC instructor Mark Nelson stepped down as director of forensics and gave the position to Sanford.

In the last seven years, the SRJC forensics team finished in the top six parliamentary debate schools, even beating out four-year colleges and Ivy League universities.

In 2013, the team placed second in the nation in the debate tournaments. Sanford said the key elements involved in the team’s success is knowing debate theory, having time management skills and staying up-to-date on contemporary issues.

Sanford could not speak about his work without mentioning his immeasurable gratitude for Mark Nelson and Susan Houlihan, SRJC faculty members and former directors of forensics, for their outstanding coaching assistance. “Hal is wonderful to work with on the speech and debate team. His wit and humor keeps everyone laughing,” Houlihan said.

Sanford also voiced his appreciation for Anna Szabados, dean of humanities and fine arts, and her support of both the speech and debate programs and his teaching. “The support of the administration is what enables me to best serve my students,” Sanford said.

Despite his hard-working nature, Sanford does not believe in all work and no play. He brings a positive attitude into every class to share his happiness with others. Besides feeding off the energy of his students or listening to rock ‘n’ roll, there’s another component to Sanford’s life that fuels his passion: models.

When the topic of models came up, Sanford cheered, jumped up out of his chair and grabbed his plastic plane model kit to display with all of the fervor of a giddy child showing off his highly valued new toy.

Since his childhood, when he started building models with his father, Sanford retained an everlasting zest for building and collecting plastic planes, tanks and figures.

Back in 1988, Sanford published a book about miniature model-making titled “The Illustrated Modelaholic: A Guide to Modeling Enjoyment,” which he said was a fun adventure to work on. In the midst of his busy schedule, Sanford still manages to make time for his passion by going to the annual Eagle Quest miniature model convention in Texas.

The enjoyment Sanford gets from model building helps to animate him in his daily life, which translates into his teaching career. Sanford notes the importance of being energized by what makes him happy, whether it’s from hobbies, teaching or his loving and supportive marriage of 35 years. He advises everyone to find something in life they enjoy, and to “follow your bliss,” as writer Joseph Campbell said.

Sanford speaks of his job and students with passion. “I believe in this place. I believe in the students,” he said. “This is literally the one job on the planet that I want, and that I will keep.”