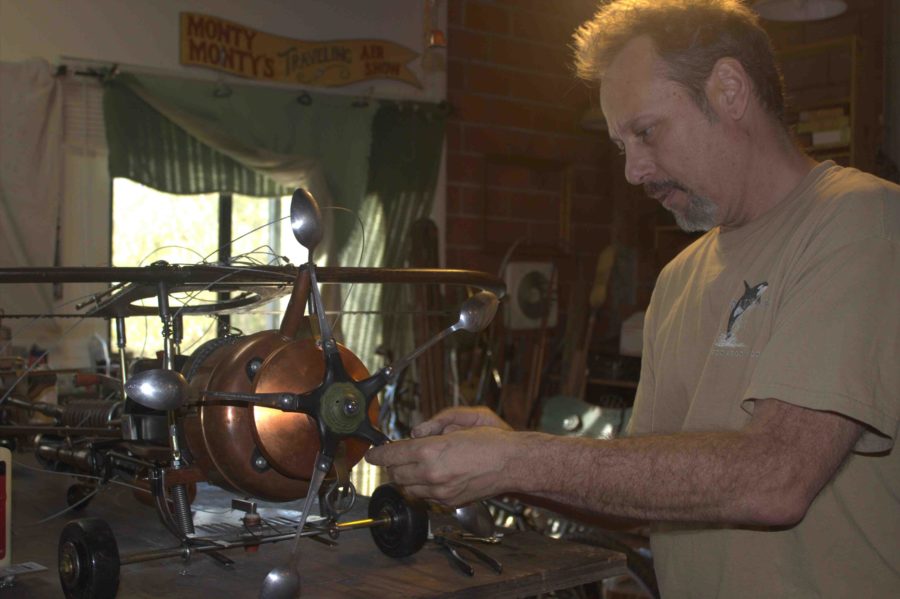 Monty Monty working on “Big Boy” in his studio at Graton. Monty Monty’s vintage collectable sculpture is on display until Dec. 7 at the Christopher Hill Gallery, 326 Healdsburg Avenue, Healdsurg.

A curious sea monster silently scrutinizes students who meditate on their next assignments at Santa Rosa Junior College Doyle Library. Moored to a wall on the fourth floor, “The Whale” is an impressive sculpture made of miscellaneous objects, such as an oar, keys and a vintage camera. In the heart of the machinery of its entrails, the clock has stopped at 3:18, while life goes on around it.

Its creator Monty Monty didn’t spare any effort to make it emerge from his imagination. “Sometimes I start in the morning and I don’t go outside until it’s dark and I realize, ‘Oh my gosh, I haven’t had lunch yet!’” said the former SRJC student.

Standing in his Graton studio with an intense alert look and his hands in motion, he twirls around a sculpture in progress, a plane called “Big Boy.” He speaks loudly with the objects that will create the story he will tell. “I write stories with my sculptures and I tell myself stories while I am putting it together,” he said. “So, the story comes to life and the idea is that I am giving life in a story.”

Monty Monty’s own story is that of a man who, as a child, put pieces together to build models. He continued to study art in high school and at SRJC, where he majored in commercial art and graphic art in the late ‘70s. “That was eye-opening because I was exposed to assemblage and different types of art, putting things together. It was a great experience and made me think of doing things differently,” he said.

His friend Natalie Seagraves said, “The way his mind works is so strange. He can see a horse in a piece of wood. That was always fascinating to me.”

His teachers recommended that he become a graphic artist to make a living. Born in Healdsburg, he moved to Washington state to pursue his career for 20 years. However, he never stopped working on sculptures during his free time, day and night.

He joked that he was tired of having to break the Washington ice with a broomstick, so he decided to move back to the sunnier climate of Northern California in 2001. Above all, he didn’t feel like himself anymore by keeping up with the transformation of the graphic industry. “The whole industry changed to desktop computers. It became less fun because I wasn’t using my hands,” Monty Monty said.

Back in California, he devoted himself totally to his art. This personal revolution coincided with the psychological and economical upheavals caused by the terrorist attacks of 9/11. “That was a scary time, everybody was afraid, nobody was thinking about art,” Monty Monty said. The art market collapsed, but he persevered because art can make peoples’ lives more beautiful and nourish them with something other than fear.

Monty Monty’s art is a poem of today, an homage to the past. Driven by his taste for history —especially early modes of transportation — and for antiques, he uses old, broken or forgotten objects.

“It’s a recycling process,” he said. “It’s environmental art in a way. I thought it was really appropriate that ‘The Whale’ was in the library because it’s an eco-friendly building with a lot of recycled material.”

He often uses objects from his own past in his work. Some of his father’s fishing items are part of “The Whale”. Spoons that previously belonged to his mother are in the propellers of the plane under construction. “She is not here anymore to support me. This is the way I can be supported,” he said.

In the context of a commission, people may give him personal objects or objects that belonged to dead relatives. In the artistic process, Monty Monty reinvents their usage to deliver a personal and commemorative creation. He gives life back to objects from the past while celebrating the memory of those who have died.

His sculptures look like an attempt to stop time. “I don’t know any other way to make time stop,” Monty Monty said, punctuated by a silence. But maybe it is not time that passes, but we who pass in time — and “The Whale” keeps watching students pass.