The only f-word that matters 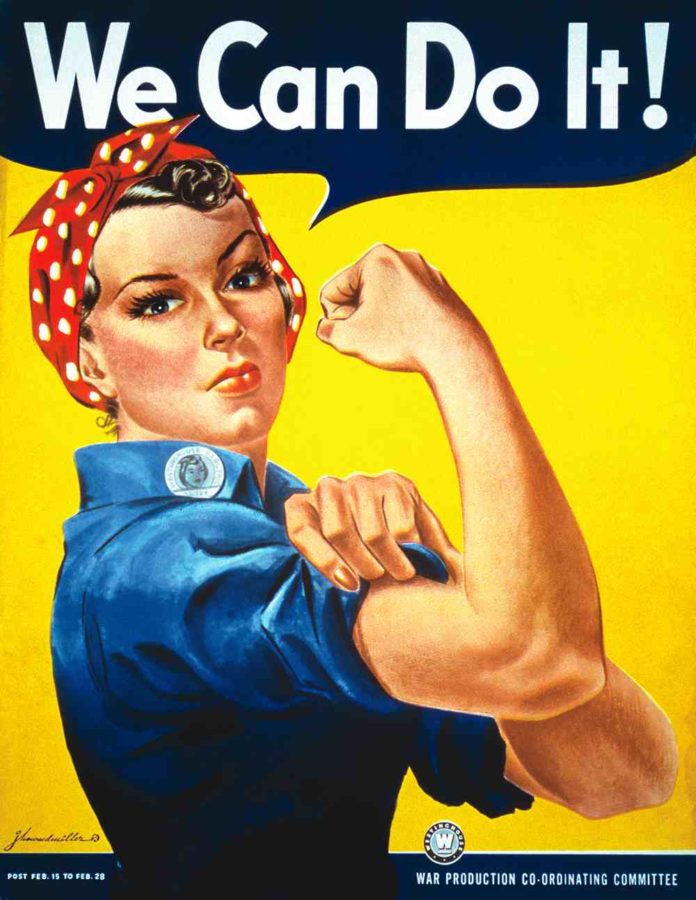 This poster by J. Ho­ward Miller has been serving as a cultural icon of feminism since 1942.

Each new generation redefines the “f-word,” a complex and controversial issue — no, not the f-word that  most people yell when they slam their finger in a car door — but feminism.

Some consider feminism a dirty word and associate it with man-hating. Others identify with the word and call themselves a feminist. The most concise way to describe what feminism means today is the idea that men and women should be creative and economic equals. Five Santa Rosa Junior College students had their own stories and opinions on the subject of the f-word.

SRJC student Emily Law considers herself a feminist. She first heard the term in high school, but didn’t fully understand what it meant until she started college.

“A lot of people like to make arguments like that biology says that you’re lesser than because of so-and-so, and that’s not necessarily true,” she said.

Although Law is a feminist, she knows many women who do not consider themselves a feminist because they believe in what they view as traditional values. She said these women believe they can’t succeed as housewives, raise kids or have a family. “They don’t see the two as contiguous, that you can’t be highly educated and be the main income earner and still have a family,” she said.

Law said the meaning of feminism has many misconceptions. “People associate a negative connotation with it because a lot of times they think that all feminists are angry, [that] they rant a lot and that they hate men and that they protest and burn bras,” she said.

While some believe that men should treat women on the first date, Law said her feminism extends to the first date as well. “They’ll ask, and I’ll say I’d rather split it,” she said.  “I would say that there’s nothing wrong with being treated and occasionally have someone do nice things for you but I think that it’s important to be able to support yourself.”

SRJC student Cogan Mahrt identifies feminism as promoting rights for only women. Although Mahrt has heard of feminism, he considers it something that was more important in the ’60s. According to Mahart, it’s relevance is diminishing because equality is now a problem of the past.

Mahart said feminists believe in preferentialism, not equal rights. “Initially I was under the impression that feminism was about equal rights for men and women, but some of them seem more into getting more things for women than for men, and that seems not good,” he said.

Mahart considers feminists as extremists. “Generally a lot of feminist[s], in my mind, tend to be overly fanatical and a little off-the-wall with what their beliefs are,” he said.

“I personally do not consider myself a feminist, but I do see it as important to some regards,” he added after a long pause.

Another SRJC student Sarai Vargas agrees with the principles of feminism but doesn’t consider herself an activist.  Vargas grew up in a traditional household where her parents instilled the idea that men should always take care of women.

She first heard of feminism when her uncle came over for dinner and made a sexist comment. “My mom and sister had to explain why it wasn’t OK,” she said.

Vargas said it is important to her that she gets an education and learns to do things for herself. “If you’re being taken care of, you’re not reaching your full potential,” she said.

Vargas also said housework should be divided between heterosexual domestic couples. She disagreed with the social norm that women should always be the ones in the kitchen. Vargas admired how her sister and husband trade off cooking. “It should be whoever can spend the time in the kitchen,” she said.

Kahlia Ann Bashi, 20, first discovered she was a feminist in middle school when she wasn’t allowed to play basketball with the boys at her school. “I was told I couldn’t, and I just kind of accepted that,” she said.

Bashi later realized that this was unfair, which inspired her to become a feminist. Bashi now has a one-year-old daughter and is no longer with the father because of his traditionalist views.

In her next relationship Bashi expects to be with another feminist. What she’s looking forward to most is to be complete equals. “We can both do the same things, and it doesn’t matter who’s doing what as long as it gets done,” she said.

SRJC student Clayton Smithson first heard about feminism as a freshmen in high school when his English teacher encouraged her students to think as feminists.

“She was always encouraging the girls to not be bimbos, that it’s not beneficial for you or others,” Smithson said. “At the same time if the guys referred to the girls as ‘chicks,’ she would say she didn’t see any chickens.”

While Smithson doesn’t consider himself a feminist activist, he does agree with feminist ideals. “I don’t know all their ideas, I would have to take each in turn, but I support equality if that’s what it boils down to,” he said.

When going out to dinner with the opposite sex, Smithson said he has no problem paying for dinner but that it should be a collaborative act. “I’ll treat you this time, some time down the road you’ll treat me and sometimes we’ll just split it, ” he said.

While Smithson agrees with the concept of equality, he also said he doesn’t agree with denying help in order to prove a point.

Once at work, his female coworker refused help putting away a large box to prove that she could do it on her own.

“I just don’t get why you turn down an offer for help when you clearly need help based on the fact that ‘you don’t need no man and you’re a strong independent woman,’” he said.  “You’re two feet shorter than me, let me grab that for you instead of coming by two hours later mopping up your brains off the floor.”

Smithson said equality is important in all aspects of life. “You don’t deserve anything better because of who you are genetically; you deserve stuff based on how you interact with other people and the content of your character,” he said.

Despite the wide array of responses, each student valued respect and equality.