Greg Papa: Voice of a generation 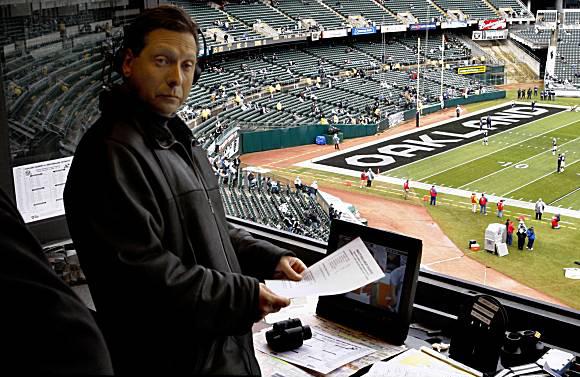 Here in the Bay Area, we are very fortunate sports fans. Not only do we have great teams that always produce excitement, but we have great broadcasters as well— and there is nobody better than Greg Papa. He has won the California Sportscaster of the Year Award three times, in 2008, 2009 and 2012, as well as a few Emmy awards.

Papa is currently the play-by-play voice of the Oakland Raiders and the host of the pre- and post-game shows for the San Francisco Giants and Golden State Warriors.His voice is smooth like butter, matched by his commitment to excellence in the art of storytelling.

“There are two distinct job requirements in what I do: one is preparing to go on the air and the other is going on the air,” said Papa. “It’s more than just giving [the audience] bullet points. To me it has to be a story, like a movie, or television, or a book.  You have to put a bow on it to make it a nice presentation.”

Papa’s colleagues agree that he is a rare talent in the broadcasting business. “I would say Greg is a great talent who has made Raider games really fun to listen to on the radio. He has great knowledge of the NBA and brought out the best in the A’s historic winning streak,” said current Warriors broadcaster Bob Fitzgerald.

After graduating from Syracuse University, Papa was the play-by-play voice of the Indiana Pacers from 1984 to 1986. “When I was in Indiana doing the Pacer games, I used to call it ‘speaking French’; they wanted the announcers to say ‘oui oui,’ and I wasn’t used to that growing up.”

Papa said that the practice of favoring the home team as a broadcaster has more or less become the norm today. “I think over time, that Midwestern mentality has overtaken a lot of the country.  The input from the teams has changed now where people are more inclined to tilt towards the home audience,” he said.

Papa has previous experience in almost all the major sports. He was the play-by-play voice of the Golden State Warriors from 1986-97.  “I always say my favorite sport is the one that’s in season,” he said. “I get bored near the end of the season and need a new challenge, but if I had to pick one it would be football.”

Papa has been with the Raiders since 1993. He was there for one of the pivotal moments in NFL history when the Raiders played against the New England Patriots in the AFC Divisional Playoff game in 2002.

With the Raiders up 16-13 in the final two minutes, Charles Woodson sacked New England quarterback Tom Brady and caused a fumble that the Raiders recovered.  The officials reviewed it to see whether or not Brady’s arm was coming forward. Video evidence clearly showed that Brady was pumping the ball— that is, acting like he’s going to through a pass, with no actual intention of doing so— however, head official Walt Coleman overturned the call. New England kept the ball and subsequently won the game on a field goal in overtime.

“That particular call, even to this day, is difficult for me to completely understand,” Papa said. “It’s the most unfair thing I’ve seen in sports, to be honest with you.”

In addition to play-by-play broadcasting, Comcast Sports Net hired Papa in 2009 to host the aforementioned Giants and Warriors studio shows, as well as “Chronicle Live,” now called “Yahoo Sports Talk Live.” Papa is no longer its host but has stayed with the Giants and Warriors.

Papa never seems nervous, although he said it happens every so often. “I’ve always said if I’m ever not nervous, it’s time to quit. I do get a little twinge of nervousness.  But you know what happens to you when you’re really prepared for what you do?  Right before you go on the air, there’s a sense of calm that comes over you, because you feel you’ve really prepared well,” he said.

For example, Giants broadcaster Dave Flemming’s microphone went dead at the exact moment Barry Bonds hit his 715th home run, passing Babe Ruth on the all-time home run list. Papa rushed to the microphone and explained to the fans what had happened.  “It was kind of a moment of terror, because I had to be sure that the audience had lost the sound as I had.  The worst thing that could have happened is if I started talking over his call,” he said.

Papa’s most famous call came unbelievably during his first year with the Golden State Warriors. On May 10, 1987, Warriors guard Eric “Sleepy” Floyd scored an unprecedented 29 points in the fourth quarter and 51 for the game in the second round of the playoffs against the Los Angeles Lakers. After Floyd scored basket after basket, Papa emphatically yelled, “SLEEPY FLOYD IS SUPERMAN!” It was an accurate statement, to say the least.

Simply put, Papa has done it all. “I have indirectly been young peoples’ guide through the formative years of their sports appreciation,” he said. “That’s important, that’s what Van Miller and Marv Albert did for me. It does make my job feel rewarding.”

Papa said he didn’t always feel that way. “When I first started, I didn’t think it was a very noble profession. I’d go to dinner parties and there would be people in the room that I thought were more interesting then myself, but everyone wanted to talk to me about sports,” Papa said. “I guess I gave back to the generations what I wanted from my elder generations.”

Ted Griggs, president of Comcast Sports Net Bay Area and Comcast Sports Net California has decades of experience in the field of broadcasting. He knows exactly what sets Papa apart from everyone else. “I’ve worked in broadcasting for over 30 years and Greg is by far one of the most talented people I have ever known,” said Griggs. “He is a fantastic play-by-play announcer, perhaps the best at basketball and football since the great Bill King. More than that, however, Greg is the rare broadcaster who can do it all: host a talk show like ‘Yahoo Sports Talk Live!’, pre-and-post game shows, news and reporting.”

Griggs said Papa does his research for every show. “He prepares and does his homework more than anyone I’ve ever met. He still prepares for each and every show as if it is his first. That is what makes him great.”