She’s not your baby: The consequences of street harassment 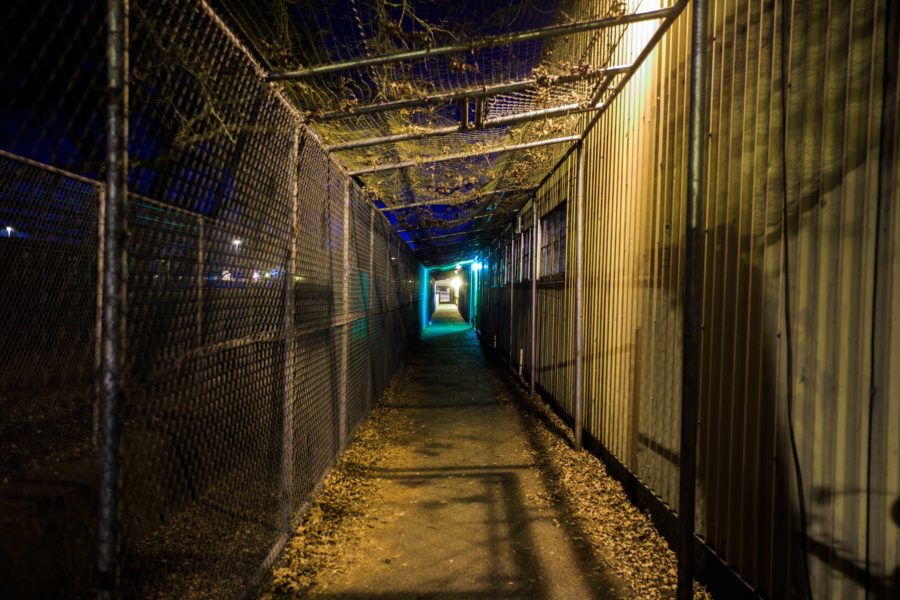 Ordinary spaces such as a walkway on the SRJC campus could be dangerous to women at night.

A woman walks to her car after a long night shift. She hears footsteps nearing, then a gruff voice: “Hey baby.” She grips her keys between her fingers. Her fear is all too familiar to women out alone.

Santa Rosa Junior College sociology student Allison Brooke, 20, was walking to her car on Steele Lane when she first heard the “typical dude” voice. Since September 2013, she has been perpetually harassed by a 30-something man in front of his house.

“He tries to get my attention with passing catcalls. It’s easier to brush them off in the daytime, but one time recently, I was more afraid because I was alone at night. He was calling after me more aggressively and not stopping after the usual ‘Hey, what’s up?’ He was asking me why I wasn’t responding. I felt more fear than I had before,” Brooke said.

Brooke described feeling hyper-aware of her actions every time she approached the harasser’s house, even walking on the opposite side of the street to avoid contact.

Most men do not perceive street harassment as a social issue due to socialization. Doyle Library technician Nina Wooderson, 60, recounted her decades-spanning experiences with street harassment in Santa Fe, Denver, New York and Mexico City.

“I think catcalling is just so automatic for some men. They don’t think about how we might feel because it’s been so ingrained by how they were raised,” Wooderson said.

SRJC sociology instructor Dr. Solen Sanli Vasquez recognized this as an example of male privilege, something that is “typically unrecognized by the holder of the privilege or by society in general.”

Dante Altamirano, 22, said that he has never experienced street harassment himself. As Brooke’s boyfriend, he also has not noticed other men looking at his girlfriend or saying anything to or about her in his presence.

“That’s the thing though,” he said. “They have this ‘dude respect’… like that’s his ‘thing.’ Not my words.”

Sanli Vasquez elaborated on this respect for fellow men. “Historically, men are supposed to be literally owners of their wives. Even the practice of taking our fathers’ last names and then our husbands’ last names relates back to this idea of ownership.”

This leads to the assumption that approaching a “taken” woman would lead to a fight because the man is expected to protect his female partner, she said.

According to the Center for Disease Control’s National Intimate Partner and Sexual Violence Survey in 2010, “non-contact unwanted sexual experiences” are the most prevalent form of sexual violence for both men and women in the United States.

SRJC psychology instructor and psychologist Dr. J. Davis Mannino explained how objectification affects the victim’s psyche. “If you’re constantly subject to harassment, microaggression, subtle discrimination, overt discrimination — it wears you down,” he said.

The threat of sexual harassment and violence “limits women’s freedom to get an education, to work, to participate in politics— or to simply enjoy their own neighbourhoods,” wrote Michelle Bachelet, the former executive director of UN Women and former president of Chile.

“Yet despite its prevalence, violence and harassment against women and girls in public spaces remains a largely neglected issue, with few laws or policies in place to address it,” Bachelet wrote.

Sanli Vasquez said that in sociology, gender identity is not defined by biology from birth but socially constructed by family upbringing, mass media and peer cultures. “Boys are socialized to be more violent while girls are trained to be much more submissive,” she said. “Girls are not supposed to be associated with [violence], or they’re only associated with it only as victims.”

Sanli Vasquez said that peer cultures force boys to prove their masculinity and heterosexuality by having sex before they are ready and/or resorting to violent behavior.

The reliance on physical appearance to prove one’s gender creates the expectation for how a woman should look. Consequently, comments about women’s appearances— like street harassment— become acceptable behavior, she said.

To combat the normalization of gender-based violence, a new wave of online feminist activism has been raising awareness to the consequences of street harassment.

Hollaback!, one of many organizations dedicated towards this cause, gathers stories much like those of Brooke and Wooderson to empower victims who may have suffered in silence before.

Sanli Vasquez lauded the power of media in creating these online communities that serve as a support system for the victims by helping them realize that they are not alone.

“It raises awareness, and I think that’s very empowering to women,” she said. “Because in a situation like rape or violence against women in general, it’s easy to go to a place where you blame yourself.”

Discussing how women should react to harassment, Mannino explained that behavior is only continued when it is rewarded, even when the so-called reward is negative.

“When someone says, ‘You’re sick; get out of my face’— that’s a reward to that person who’s initiating that negative behavior and reinforcement for them to do it again,” he said.

Sanli Vasquez said it is important to change the male culture so men no longer feel the need to harass women to prove something to themselves and to their male peers.

“We can’t let them become perpetrators. We have to change the culture itself,” she said.

“It’s as simple as not laughing at that sexist joke and saying, ‘That’s just not funny, dude’ or ‘Why do you have to talk about that?’” she said.

When asked how men can become better allies regarding street harassment, Altamirano said, “Don’t do it. It’s creepy and kinda gross. If you want someone’s attention, yelling at them probably isn’t that great of an idea.”

It is also important to recognize the cues of interest, Brooke said. “Although women are conditioned to be nice and not blatantly reject people, people need to understand and accept when someone’s just saying ‘no.’”