Kayla Kearney breaks the silence: A star is revealed 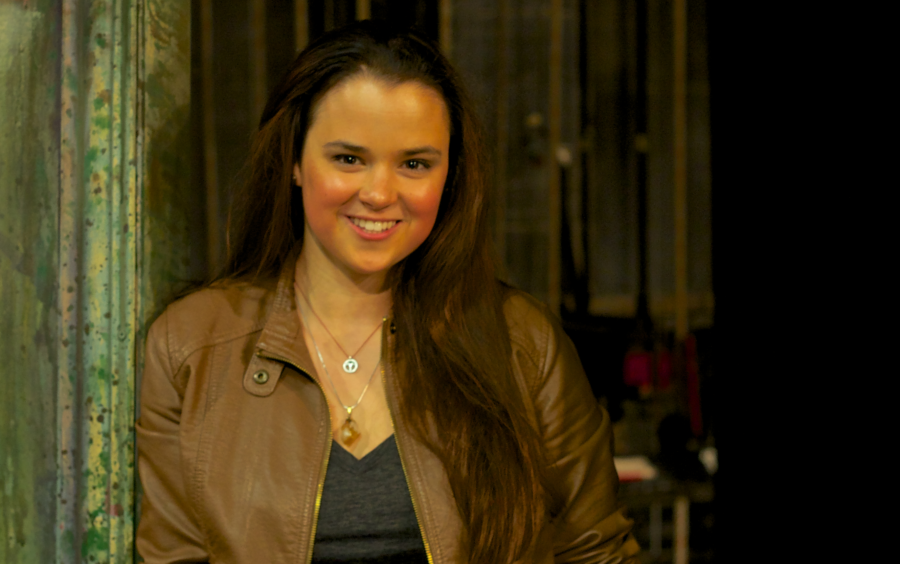 Kayla Kearney, whose YouTube video garnered more than one million views, takes a moment away from her busy day at SRJC Dec. 6.

The Maria Carrillo High School senior gripped the microphone as she stood under the familiar stage lights that had illuminated her lead performances in numerous productions. At the Martin Luther King Jr. Assembly, however, she was on her own: no cast members, no costumes, no stage directions.

Alone on stage, she paired a slightly wrinkled dress shirt with jeans and sneakers, intermittently brushing aside the curly strands that fell down her rosy cheeks.

“This speech will change my life forever— but I hope my words can change more,” she said.

Her words— chronicling her journey of self-acceptance from her first crush to a role in a community theater production of “Rent”— turned viral with more than a million views on YouTube.

Looking solemnly into the crowd, she announced, “I feel the need to stand in front of all of you to tell you that I’m gay because I want to break the silence.”

Kearney, now 20, laughs heartily as she recounts her experience, her gray eye shadow glimmering in the dim-lit café:

“When I rewatch it, which I rarely do, I cringe. Some people watch it and think that it’s hammy, but the thing is, it wasn’t hammy. It was totally how I was feeling. I was this angsty teenager.”

She had opened up to a small group of friends and her family about her sexual orientation just a few months before deciding to do the speech. It was then that she realized that she didn’t want rumors to spread.

“I liked the idea of me, on my terms, just saying what I wanted to say. It was also cool to include my school in my ‘coming out’ journey, to help people see that you’re not suddenly OK [being out]. Even all that cheesy stuff— that it’s important to accept people for who they are, et cetera et cetera— that’s still so important to hear.”

Nonetheless, the eight-minute video filmed by her parents was meant for their own keepsake, not YouTube.

“It was a debate because we knew that people could be mean,” she said. It took her a couple of days to decide, but she eventually uploaded her now-famous video, “High School Senior ‘Comes Out’ in Assembly.”

Clicking the “Upload” button has resulted in much press coverage, which included becoming the second-youngest person on the Forty Under 40 list, a compilation of accomplished individuals set to influence the future of culture according to the “The Advocate” website. She cites the list as a major source of viewership in the first few months. After the first peak in April, the video now receives a consistent daily view count around 2000.

Kearney also flew to New York City over Veterans’ Day weekend to star in a documentary film. The team of “Coming Out” had scoured YouTube and contacted Kearney, asking if she would share her insight on coming out in the age of social media.

What most of her online admirers don’t know is that she had given the speech seven times to every English class at MCHS throughout the two-day assembly. It was the seventh speech, performed at night in front of parents and community members, that made it online.

“That may have added to the over-rehearsed feel of it. I had said it so many times by then,” she said, acknowledging the negative YouTube comments that scrutinize her “theatricality.”

“Looking back, it is a little theatrical. I was so in the moment, to be completely honest. But I think it’s also just my personality, and I’d never made a speech before. But it was honest; the fact that it has touched so many people lets me know that there was honesty in there. I can see how people would perceive it [as theatrical], and that’s OK. It is what it is.”

While she affirms that she “wouldn’t make the same speech now,” Kearney is satisfied with how the video turned out and appreciates that people continue to watch it today.

“The difference between me as a 17-year-old doing the speech and me now is that I don’t care anymore if people don’t like me for being gay. I feel more secure about who I am now, but I think my video is popular because I captured that 17-year-old insecurity. So many [LGBTQ celebrities] are already in that secure place where they can say, ‘This is the least interesting part of me’ or ‘Take it or leave it.’ That’s great, but there’s a lot of kids who are still struggling. It’s such a big deal for them, and I think it’s also important to acknowledge that.”

Her words resonated with her audience, as YouTube comments also include proclamations like, “She’s the next Martin Luther King Jr. of the LGBTQ community.” But Kearney laughs it off.

When asked if she experienced a divide between online and offline reactions, Kearney said she received a unanimously positive reaction at school.

“I think that many people were uncomfortable, but I never heard about it. [My peers] weren’t going to let that get to me, which was kind of cool. They really protected me, collectively. I remember talking to my speech teacher beforehand, and we didn’t know how people would react.”

Two years later, the principal of her alma mater divulged to Kearney that he dealt with considerable backlash from conservative parents.

Something, or rather, someone else Kearney was unaware of was Amanda Howlett, 19, who remembers Kayla in the hallways of MCHS.

“I had a really intense reaction because I was in the closet at the time. I was definitely in tears… Like, why can’t I walk down the street and hold hands with a girl and not have it be a big deal? I just loved how Kayla was able to connect with everybody there. She made it such a human thing instead of a gay thing,” said Howlett, now an SRJC student.

“She was one of the ‘cool’ people— I’m assuming, since everyone knew her— and she just made it seem like a good thing… When somebody big like that [comes out], it becomes so much easier.”

Howlett came out two months later and was inspired to participate in the following year’s MLK Assembly to call attention to the school’s casual use of homophobic language.

When asked about a follow-up video, Kearney groans, confessing that she has made several attempts to express her gratitude and update her fans on her life.

She’s been busy indeed as an involved member of the SRJC Theater Arts Department, earning the lead role in “Distracted” in October.

Kearney also created and performed a piece for SRJC Student Theatre Guild’s “The Empty Space Performances,” in which she played the piano and sang “She Keeps Me Warm” by Mary Lambert, the lesbian singer-songwriter, best known for her chorus in Macklemore’s “Same Love”, over a montage of news clips pertaining to the gay rights movement.

Now in a new community of students at SRJC, she describes “coming out” as “a continual process” and reflects on the stigma of homosexuality.

“People just find out through knowing me. I mention an ex-girlfriend, as opposed to saying ‘I’m gay’ as a disclaimer. [Coming out] should be like telling people that you’re left-handed. There happens to be fewer left-handed people in the world, but people won’t treat you differently.”

Finally, Kearney says of her journey: “It’s just an honor to have my speech reach so many people. Because it got so popular online, it opened me to a huge global community. There are so many people around the world who are currently dealing with this, or those who are older who are so happy to see someone get away with making this speech at school… It’s cool to feel included in this movement. It’s just a good feeling. I’m glad I did it.”

Kearney’s experience is not the typical “coming out” story, but surely the million viewers are glad she did it, too.