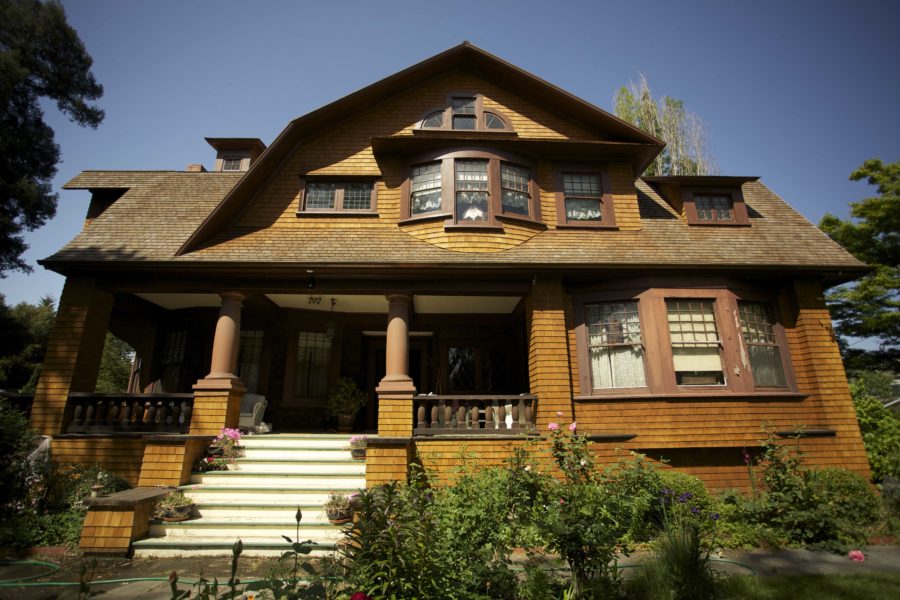 Comstock House is a unique work of architecture designed by Brainerd Jones.

Jeff Elliott, in addition to his roles as writer and photographer, wears the mantle of mad scientist: he’s restoring a time machine right down the street from Santa Rosa Junior College.

The exterior East Coast Shingle style design of Comstock House, 767 Mendocino Ave., advises the visitor he’s entering the dawn of the 20th century, but ascending the wide steps and stepping over the transom, the trip back through the ages truly begins.

Aside from some antiques of more modern vintage (like a 1948 Bakelite television), bookshelves containing some volumes clearly published within the last decades and a modern office complete with computers and Internet, the home could indeed have fallen 108 years straight through a wormhole.

A copy of “Proserpine” hangs just inside the front door, a portrait by Rossetti, one of the Pre-Raphaelites who inspired Morris.

Spacious interiors well lit by many windows display the period light fixtures and comfortable chairs, wide staircase and soft hues from the stained glass at the top of the landing.

“We always intended to take it back to its original,” Elliott said. Fortunately, none of the three prior owners chose to remodel the interior, making the task easier for Elliott and his wife, Candice.

In just seven months builders raised Comstock House, designed for James Wyatt Oates and his wife Mattie in 1905 by celebrated local architect Brainerd Jones. The Oates family enjoyed their new abode less than ten years, passing to illness and injury in rapid succession. Fortunately, their untimely deaths did not lead to family spirits haunting the grounds.

“There is no ghost,” Elliott said. “People always want to know if there’s a ghost.” Although the domain lacks ghosts, eccentricities may be found: an anonymous member of the Sonoma Country Historical Society reported rumor of Judge Hilliard Comstock’s attic shooting gallery.

The house languished for a year before Nellie Comstock purchased it for $10,000. An artist and writer, Comstock no doubt appreciated Brainerd Jones’ penchant for asymmetry. Upon Nellie’s death, son Hilliard (who Oates mentored in law) and his wife Helen took over Comstock House, which bears their surname in memory of the family residing there for three-quarters of a century.

“All thanks are due to Helen Comstock,” Elliott said. “Because in that horrible period of the late 1960s and early ’70s when we all sort of went nuts and started tearing things down, she resisted it.”

After Helen Comstock’s death in 1988, another elderly woman bought the place, but when it returned to the market in 2006, the home once again had no takers, this time for six months. At $1.3 million, the Elliotts took on the tarnished diamond.

Cause for the surprising lack of offers became evident as soon as prospective buyers walked in the front door. “The realtor had this folder for you, which showed [the house] needed $45,000 for a new roof, the foundation was iffy and other things,” Elliott said. The roof was indeed bad, with fist-sized holes in several places and requiring up to twenty buckets to catch rain when it fell.

“But Candice and I had both done old houses before,” Elliott said, who restored farm houses in the Midwest for a number of years. Wife Candice’s experience included restoring a four-square in Portland, Oregon, and together they worked on a Victorian in Vallejo. “So we knew with a shingle roof you can replace them one at a time. Instead of spending $45,000 for a new roof, we spent $1,500. And we had a roof that lasted until last year and it didn’t leak at all.”

“Polk’s idea was the house itself was furniture, inside and out, just one big piece of furniture,” Elliott said. “You don’t paint furniture – maybe varnish it – so why paint your house? So he specified that this house in Sausalito would have no paint at all on any wood and would be left to age naturally.” That house is now gone, but Jones took the same idea and applied it to Comstock House.

“Brainerd Jones was a pretty good architect but not a great one,” Elliott said. “He was only an adequate draughtsman and he didn’t seem to have much of a knack for visualizing spaces and designing in three dimensions.” Elliott detailed how Jones failed to support an upstairs hallway with a wall below, buttressing the weight from above. “That’s an unforgivable architectural error and there are further mistakes I can point out around the house, although none other that serious,” Elliott said.

“Where Jones excelled, I believe, was in listening to his clients and designing houses well-suited for them,” he said. The Oates for example were an older, fairly quiet household. “Their idea of a big night was dinner with friends and cards afterwards.”

Jones fashioned Comstock House for the Oates’ specific needs and tastes, right down to the dramatic differences in height between the individual mirrors and wash basins for Mattie (who was tall) and Wyatt (who was not). “The study, where they would have played cards, is the only room with a overhead ceiling light, except for the dining room,” Elliott said.

The house became a living portrait of the Oates and their lifestyle. “And that was the nature of Brainerd Jones’ real genius,” Elliott said.

“I’ve always been a fan of the Shingle style,” Hedgpeth said. “This rather lyrical style of gambrel meets the eclectic is a blending of the rural and the aristocratic.”

The more rural aspect traces back to the 1876 Centennial Fair in Philadelphia featuring “living history” recreations where actors donned period costumes and performed period tasks, which included a functioning Colonial era house. Its popularity spurred interest in a Colonial revival, which in turn spawned the East Coast Shingle style.

“The fun breakthrough [with Brainerd Jones’ Comstock House] is that hyper-formal arches were shunned in lieu of a playful interface of more combined forms, combined styles,” Hedgpeth said. “This is a Shingle style that includes a Georgian tone to it. It is beefy and deliberate, a more Ionic column rather than Corinthian, strong and lyrical at the same.”

Strength of purpose and creative energies of all kinds drive the restoration today.

“Because I operate as the contractor here, it’s kept [expenses] down,” Elliott said. He’s also a shrewd buyer, ordering white cedar shingles in bulk from Canada. White cedar was Jones’ initial choice, but shipping costs led to installation of the more affordable red cedar. “Over seven years, we still have not passed $100,000 in restoration expenses,” Elliott said.

Their investment paid off in other ways, building new perspectives and improving health.

“No room will be brilliantly lit at night,” Elliott said. “You’ll never have the joy of instant heat if it’s really cold, because the radiators take hours to heat up. We learned to work with the systems of the house, from the radiators to how the original kitchen worked. The stove adventure is a book unto itself.” He likened the subculture of stove restorers and dealers to the world of illegal drugs.

And the health benefits go beyond amusing anecdotes.

“Candice and I have been lifelong asthmatics, until we moved into this house. We still have some problems, because of pollen, etc., but one of the reasons to live in an old house is that it’s free of any chemicals that create asthma,” Elliott said.

“There’s no carpet, except for rugs. There’s nothing that’s going to hang onto dust. There’s no forced air. The house is heated by radiators,” he said. “We’re still working with the original system, it works fine and there’s nothing to be blown around – we have dust, but it doesn’t circulate like it does with forced air.”

The Elliotts don’t force much of anything, when it comes to Comstock House.

“When most people move into a house, they adapt the house to fit their needs,” Elliott said. “What Candice and I did instead was we adapted to the house.”